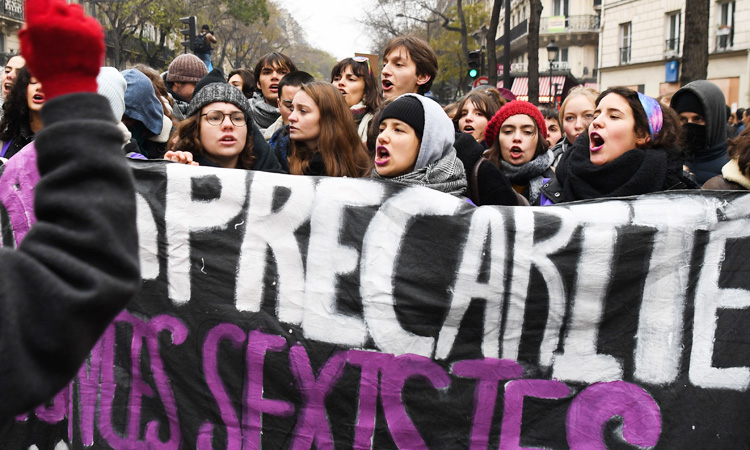 Protesters hold a banner during a demonstration against the pension overhauls, on Place de la Nation in Paris, on Thursday. Alain Jocard/ AFP

The first day of a strike, seen as a major test for President Emmanuel Macron’s ambitious vision of reforming France, saw giant rallies across the country coupled with walkouts that paralysed transport and closed schools.

Friday was set to follow a similar pattern, with almost all high-speed train services cancelled, most of the Paris metro system shut down and hundreds of flights set to be axed.

Yves Veyrier, head of the hardline FO union, warned the strike could last at least until Monday if the government did not take the right action. 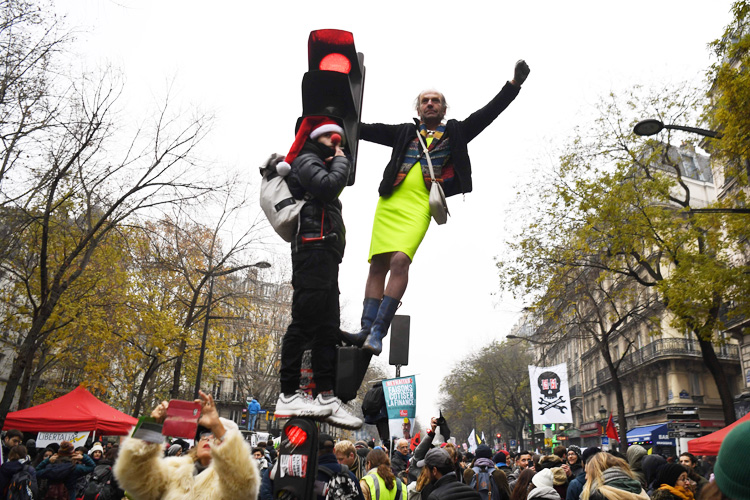 Protesters take part in a demonstration against the pension overhauls, on Place de la Nation in Paris on Thursday.

“The strike is not going to stop tonight,” added Philippe Martinez, secretary general of the CGT union, late on Thursday.

But it remains far from certain the protests will match the magnitude of the 1995 strikes when France was paralysed for three weeks from November to December in an action that forced the then government into concessions.

As on Thursday, national train operator SNCF has axed 90 percent of the high-speed TGVs on Friday and just 30 percent of regional trains will run.

On the Paris metro, 10 lines will remain totally shut, four will work at a much reduced capacity and only two — the driverless 1 and 14 — will work normally. 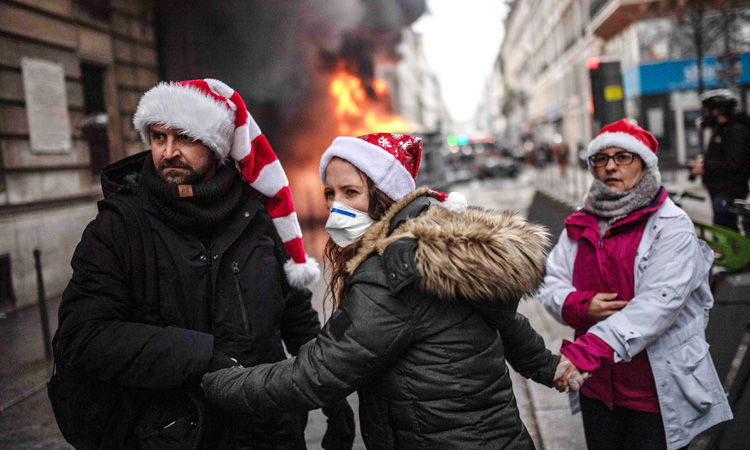 People wearing Christmas hats try to make their way in the streets of Paris during a demonstration on Thursday.

Flag carrier Air France is again axing 30 percent of domestic flights. There will also be severe disruptions on the Eurostar, with some two dozen trains cancelled on the cross-Channel route.

A weekend of travel misery is also expected.

National newspapers were unable to publish their print editions, and the CGT union said workers had blocked seven of the country’s eight oil refineries, raising the prospect of fuel shortages if the strike continues.

Bike paths were packed as commuters turned to bicycles and electric scooters while ride-hailing companies were offering special strike promotions.

Macron’s government has yet to set out its plans in full but is pushing for a single pension scheme which critics say would require everyone to work longer.

A pre-school teacher demonstrating in the eastern city of Belfort, Anne Audier-L’Epingle, said she was striking because “I don’t know what I will be able to offer two-year-old children when I’m 65.”

The minimum pension age in France is 62, one of the lowest among developed countries. 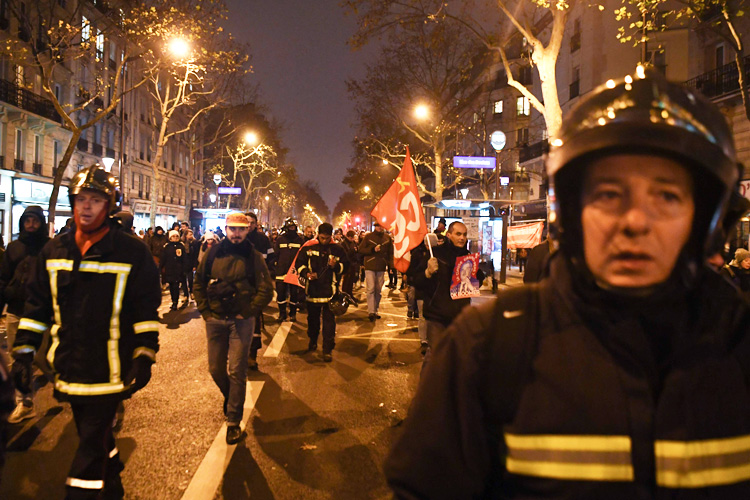 Protesters and French firefigthers take part in a demonstration against the pension overhauls, in Paris, on Thursday.

But railway workers, opera employees and a host of other workers have more advantageous schemes, with train drivers for example generally retiring in their early fifties.

Police fired teargas to disperse small groups of rioters in Paris as well as in the southeastern city of Lyon and western city of Nantes.

But the dozens of demonstrations held nationwide were mainly peaceful.

More than half a million people protested across France, according to a tally of official figures, even excluding a protest that unions said gathered around a quarter of a million in Paris.

Macron has faced a wave of opposition this year, from the “yellow vest” movement demanding improved living standards to more recent protests from police, firefighters, teachers, hospital workers and lawyers. 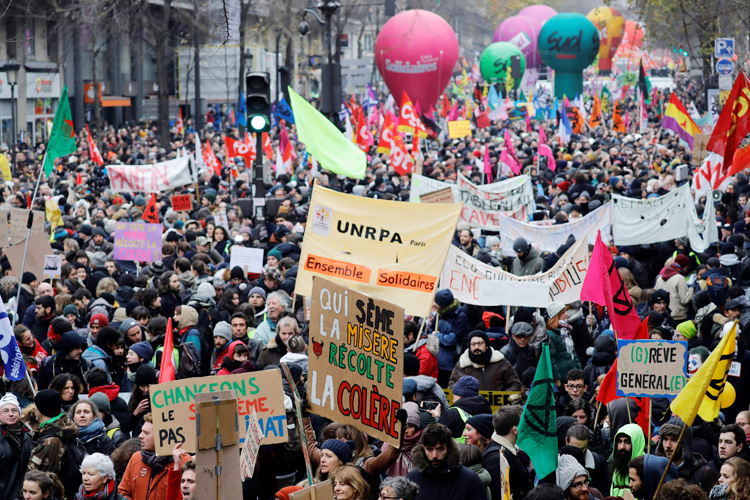 People take part in a demonstration against the pension overhauls, in Paris, on Thursday.

So far the former investment banker has largely succeeded in pushing through a series of controversial reforms, including loosening labour laws and tightening access to unemployment benefits.

But this is the first time the various disgruntled groups have come together in protest.

Macron has sought to rise above the strikes and has chosen to make no official comment in the days leading up to the stoppages.

A presidential official, who asked not to be named, said he was “calm” and “determined to carry out this reform” in a mood of “listening and consultation.” 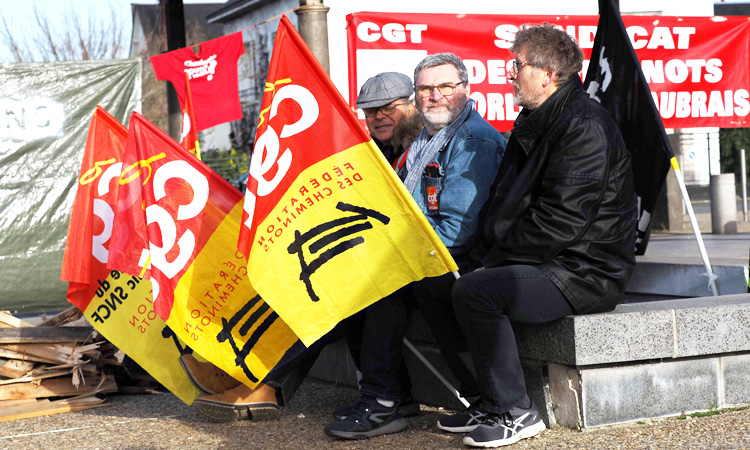 Christmas Eve in France was set to be marred by the nearly three-week standoff between French train drivers and the government over pension reforms. Now in its 20th day, the walkout has ruined Christmas travel plans 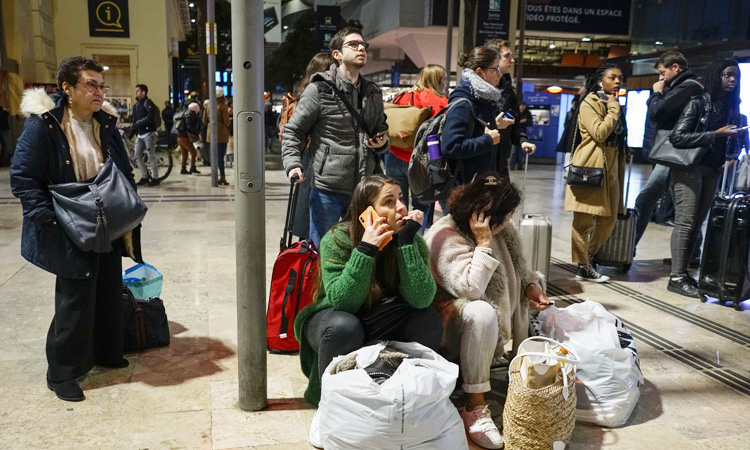 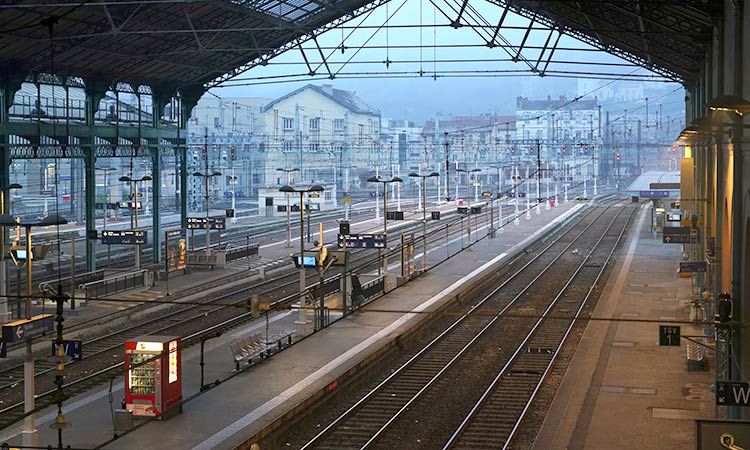 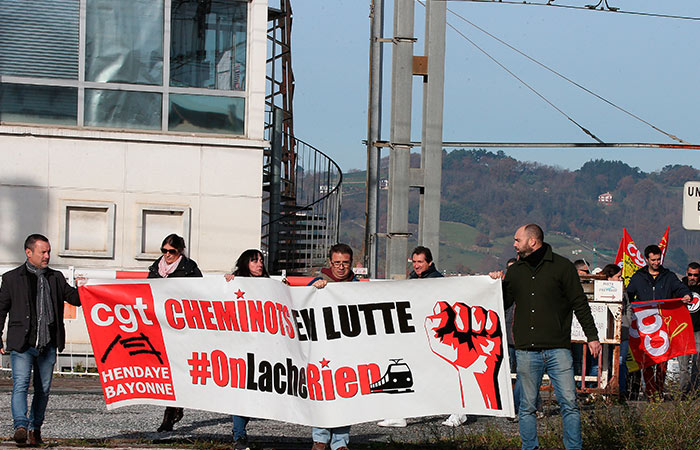