Iran may carry out aggressive actions in future: Pentagon - GulfToday

Iran may carry out aggressive actions in future: Pentagon 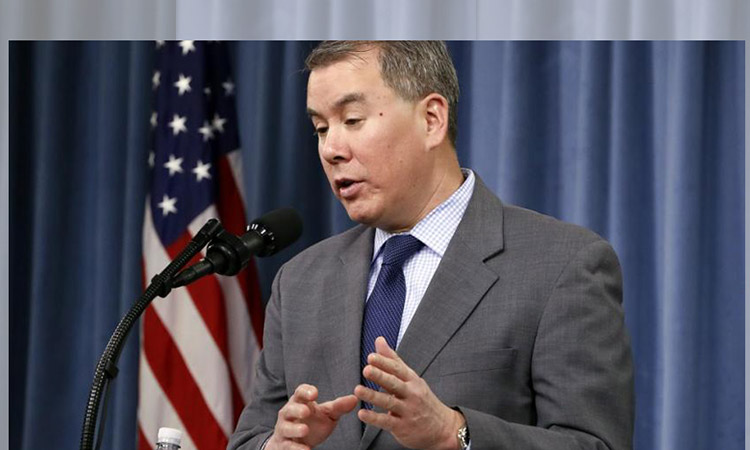 US Under Secretary of Defence for Policy John Rood speaks to the media. File photo/AP

A senior Pentagon official said on Wednesday that there were indications that Iran could potentially carry out aggressive actions in the future, amid simmering tensions between Iran and the United States.

“We also continue to see indications, and for obvious reasons I won’t go into the details, that potential Iranian aggression could occur,” John Rood, the Pentagon’s No.3 official, told reporters.

Rood did not provide details about what information he was basing that on or any timeline.

“We’ve sent very clear and blunt signals to the Iranian government about the potential consequences of aggression,” Rood said.

Meanwhile Iran said, it is willing to return to the negotiating table if the United States first drops sanctions, President Hassan Rouhani said on Wednesday.

European countries have been pushing for talks with Iran to salvage a 2015 nuclear deal that has all but collapsed since the United States withdrew and reimposed sanctions last year.

Rouhani has long demanded the lifting of US sanctions for Iran’s return to talks under the auspices of the so-called P5+1 that reached the deal − the five veto-wielding permanent members of the UN Security Council plus Germany.

His latest statement comes after a shock announcement in mid-November that the price of petrol was going up by as much as 200 per cent triggered demonstrations across Iran that turned deadly.

The decision came at a sensitive time ahead of a February parliamentary election.

It is a rise many Iranians can ill afford in a country whose sanctions-hit economy is expected to contract by 9.5 per cent this year.

“If they are prepared to put aside the sanctions, we are ready to talk and negotiate, even at the level of heads of the 5+1 countries,” Rouhani said in remarks aired live on state television.

“We are under sanctions. This situation is (because of) incitement by the Zionists and the region’s reactionary,” he said. His remarks came after France and Germany raised the possibility of triggering a mechanism in the deal that could lead to the reimposition of UN sanctions.

Rouhani described the sanctions as “a cruel act by the White House.” “We have no choice but to resist and persevere,” he said.

“At the same time, we have not closed the window for negotiations. I tell the nation of Iran that any time America is prepared to lift and put aside its wrong, cruel, unlawful, incorrect, terrorist sanctions, immediately the heads of 5+1 can meet and we have no problem.” The landmark 2015 deal gave Iran relief from economic sanctions in return for curbs on its nuclear programme.

It has been at risk of falling apart since US President Donald Trump unilaterally withdrew from it in May last year and reimposed sanctions.

Known formally as the Joint Comprehensive Plan of Action (JCPOA), it was agreed between Britain, China, France, Russia and the United States, plus Germany.

Meanwhile, Israel’s Prime Minister Benjamin Netanyahu on Wednesday praised the tough US sanctions on Iran, saying the financial pressure has sparked protests against the Iranian government across the region, and urged even stronger action against the Tehran government.

Netanyahu spoke to reporters shortly before meeting with US Secretary of State Mike Pompeo. Their talks were expected to focus heavily on Iran.

While saying that he has given up hope of European countries joining the sanctions, he said there is still a “wide spectrum” of options for ratcheting up the pressure.

“We’re seeing the Iranian empire totter. We see demonstrations in Tehran, demonstrations in Baghdad, demonstrations in Beirut,” Netanyahu said earlier. “It’s important to increase this pressure against Iranian aggression.” Twelve months on from the US pullout, Iran began reducing its commitments to the deal hoping to win concessions from those still party to the accord.

In his remarks, Rouhani said his government strived to remain in the nuclear deal despite “pressures” that were on it.