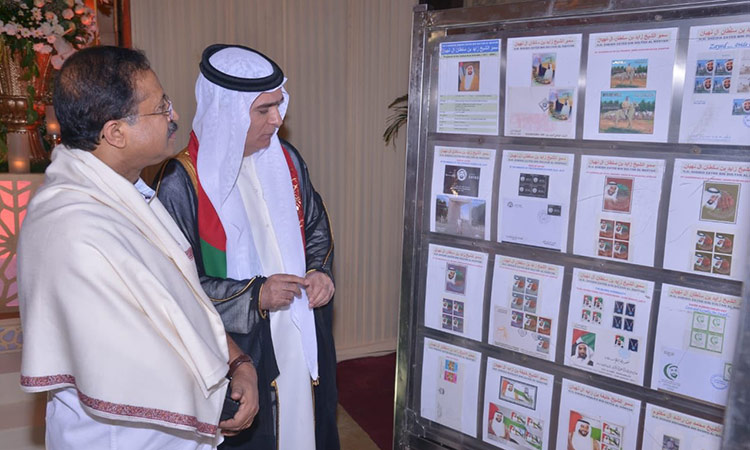 The UAE Ambassador to India, Dr Ahmed Al Banna, at the Taj Palace in New Delhi to celebrate the UAE's 48th National Day.

In a gesture to mark the UAE’s 48th National Day, the Indian government has issued a special postal cover with images of Sheikh Zayed Bin Sultan Al Nahyan and Mahatma Gandhi with streaming replicas of the national flags of their respective countries under those images.

The postal cover also has a special postmark with the legend in English and Hindi that reads "48th National Day: United Arab Emirates" and a New Delhi dateline below the legend.

The back of the cover is adorned with the logo of India Post and details of the government’s issuing authority.

Philatelists in India told the Emirates News Agency (WAM), that issuance of a special postal cover and postmark is a rare honour in India and reflects the current, flourishing bilateral relations between the UAE and India.

Philately was a dominating theme at a reception hosted by the UAE Ambassador to India, Dr Ahmed Al Banna, at the Taj Palace here to celebrate the 48th National Day.

The Chief Guest at the reception, the Indian Minister of State for External Affairs, V Muraleedharan, was shown around a philatelic exhibition at the venue which featured rare collections of stamps from the UAE and from India by Dr Al Banna.

From the Indian side, there were stamps on Mahatma Gandhi and the erstwhile Cochin princely state, which is now part of Kerala in South India.

The exhibition was facilitated by the Emirates Philatelic Association in Dubai, and on the Indian side, by the All India Philatelic Federation as well as the Philatelic Society of India, with cooperation from the Indian government’s Department of Post.

Ummer Farook, a stamp collector from Kerala, whose five frames of UAE stamps were on display, said this was the first time such stamps were being exhibited in India. The novel effort to scale the frontier of UAE-India philatelic cooperation is an initiative of Dr Al Banna and was appreciated by the Indian Chief Guest at the reception.

Muraleedharan, who looks after India’s relations with the Gulf and the Arab world in the Ministry of External Affairs, showed special interest in rare stamps of Cochin princely state, a collection loaned for the exhibition by Anil Suri, a long-time member of the Emirates Philatelic Association. Muraleedharan is from Kerala, with which Cochin state merged as part of a reorganisation of Indian states.

A fashion show featuring traditional UAE outfits designed by Emirati designer Shamsa Al Mehairi, was another highlight of this year’s National Day reception. The fashion show was presented by C.D. Foundation, a local organisation, which specialises in trade and cultural exchanges between nations.