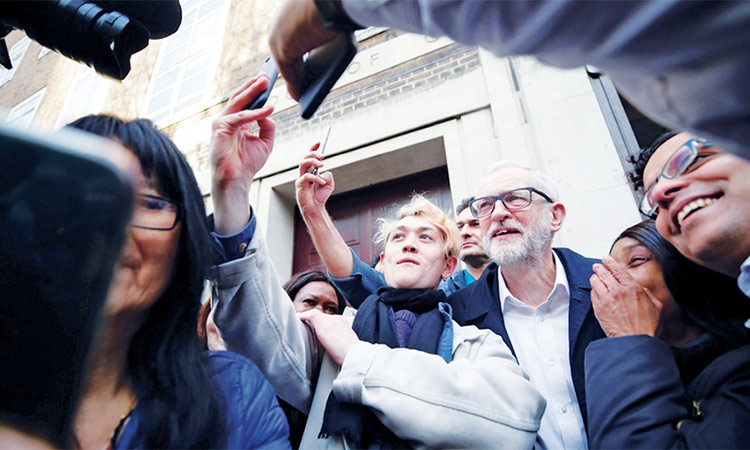 Jeremy Corbyn takes pictures with people outside University of London on Tuesday. Reuters

British Labour leader Jeremy Corbyn said on Tuesday there was a “new conspiracy theory” after questions were raised over leaked documents he said showed Prime Minister Boris Johnson had raised the health service in trade talks with the United States.

Experts have said the leak and distribution of classified British-US trade documents online resembled a disinformation campaign uncovered this year that originated in Russia. They said it could signal foreign interference in Britain’s election.

“I held a dossier up because it had been released, and I’d seen it, and at no stage until today when this new conspiracy theory arose, has anyone challenged the veracity of that document,” Corbyn told ITV’s This Morning programme.

“If the document is not accurate then why is it it’s been out there all this time, no minister has claimed it’s inaccurate, no government has, and in reality the minutes are there of meetings.”

Corbyn also made his first direct apology after facing criticism for not tackling anti-Semitism in his party.

“Obviously I’m very sorry for everything that has happened,” he said. “But I want to make this clear, I am dealing with it, I have dealt with it.”

US President Donald Trump is in Britain to attend a meeting of the Nato military alliance and Corbyn has accused Prime Minister Boris Johnson of putting the country’s public health service up for grabs in preliminary trade talks. Johnson denies the accusations.

“I very gently, and quite simply but extremely firmly, say this, in any trade deal with the United States with a Labour government, public services will not be put on the table,” he told a rally. “Our NHS (National Health Service) will not be put up for sale to anybody.”

Corbyn wrote to US President Donald Trump on Monday to ask him to revise US negotiating objectives for a post-Brexit trade deal to ensure Britain’s public health service is not included.

Corbyn, whose party is trailing Johnson’s Conservatives in the polls ahead of a Dec. 12 election, has sought to make Britain’s much-loved National Health Service (NHS) a key battleground in the vote.

Johnson has said that “under no circumstances” would the NHS be on the table in negotiations.

In his letter, timed to coincide with Trump’s arrival in Britain for a Nato summit, Corbyn said revising US negotiating objectives would help reassure the British public that “the US government accepts that our NHS is not for sale in any form.”

His demands included excluding any reference to pharmaceuticals, dropping demands for “total market access” to UK public services and ensuring NHS patient data is exempt from digital trade and data sharing provisions in any agreement.

“I am sure you understand that our coming General Election on 12th December means the British public need urgent clarity that our NHS is genuinely off the table in UK-US trade talks and will not be exposed to higher costs from US drugs companies,” Corbyn wrote in the letter, released by his office.

Trump said on Tuesday that he thought Prime Minister Boris Johnson was very capable and would do a good job, moments after saying he did not want to get involved in the British election campaign.

The Dec. 12 election will decide the fate of Brexit and the world’s fifth largest economy: Johnson has promised to take Britain out of the EU on Jan. 31 while opposition Labour Party leader Jeremy Corbyn has promised another EU referendum.

Trump has featured heavily in the British election campaign, where his name is used by the Labour Party as a by-word for a capitalist system that Corbyn, a veteran socialist campaigner, has promised to tear up if he wins power.

In London to attend a meeting of Nato leaders, Trump said he did not want to complicate the election, but then added: “I think Boris is very capable and I think he’ll do a good job,” Trump said.

He has previously cast New York-born Johnson as ‘Britain’s Trump’ and feted him as the best leader to deliver Brexit.