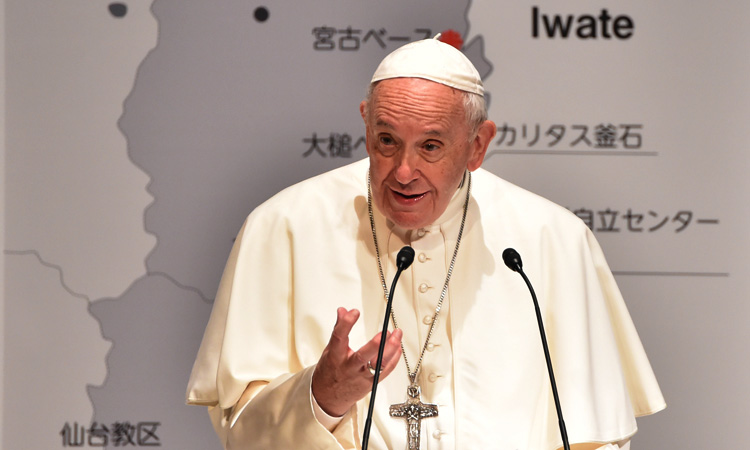 Pope Francis delivers a speech during a meeting with the victims of triple disaster in Tokyo on Monday. Kazuhiro Nogi/ AFP

Pope Francis called on Monday for renewed efforts to help victims of Japan’s 2011 “triple disaster” of earthquake, tsunami and the Fukushima meltdown, noting “concern” in the country over the continued use of nuclear power.

On the penultimate day of his long-cherished trip, Francis had an emotional encounter with survivors of that fateful day on March 11, 2011, when a 9.1-magnitude earthquake followed by a 17-metre (56-foot) high tsunami devastated much of northeastern Japan and killed nearly 16,000 people.

He embraced Matuski Kamoshita, a 17-year-old boy who told him he had been bullied so badly after evacuation that he “wanted to die” and that his father became mentally and physically ill after the disaster. 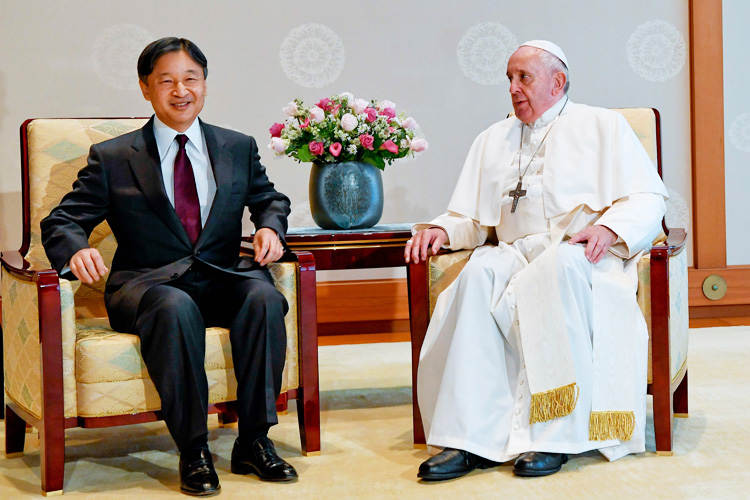 Pope Francis meets with Emperor Naruhito at the Imperial Palace in Tokyo on Monday.

The 82-year-old pontiff paid tribute to those who rushed to the assistance of the victims “with outpourings of prayers and material and financial aid.”

“We should not let this action be lost with the passage of time or disappear after the initial shock; rather, we should continue and sustain it,” Francis said.

The wave swept away everything before it, washing away people, buildings and farms, but also damaging cooling systems at the Fukushima Daiichi nuclear power plant, sparking the worst nuclear disaster since Chernobyl.

Nearly half a million people fled their homes in the first days after the quake and even today, roughly 50,000 remain in temporary housing. 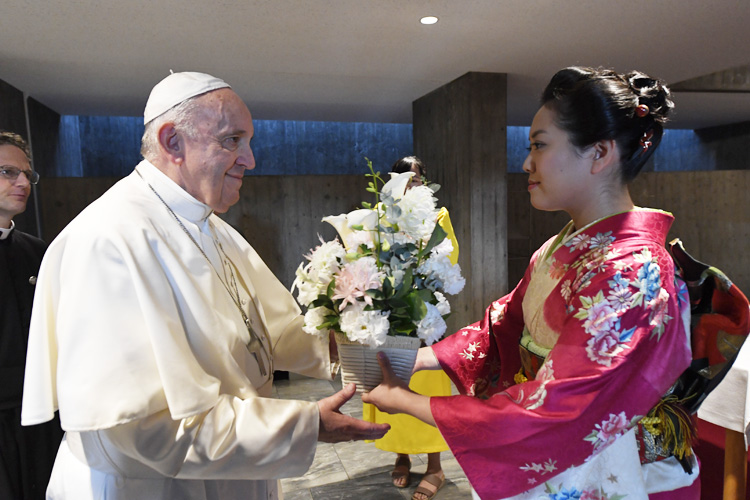 Pope Francis receives flowers from a woman dressed in a kimono at the St. Mary's Cathedral in Tokyo on Monday.

The pope heard harrowing testimony from survivors of that day, such as Toshiko Kato, who headed a Catholic kindergarten and lost her home in the tsunami.

“I remember that when I stood in the rubble where my home had been, I was thankful for being given life, for being alive and for just being able to appreciate it,” she told the pope.

The head of the world’s 1.3 billion Catholics noted that some of the survivors feel “forgotten” and face ongoing issues of contaminated land and the long-term effects of radiation.

He stopped short of intervening in the debate over nuclear power in Japan, merely noting that bishops in the country have called for atomic plants to be shelved.

“In turn, this involves, as my brother bishops in Japan have emphasised, concern about the continuing use of nuclear power; for this reason, they have called for the abolition of nuclear power plants.” 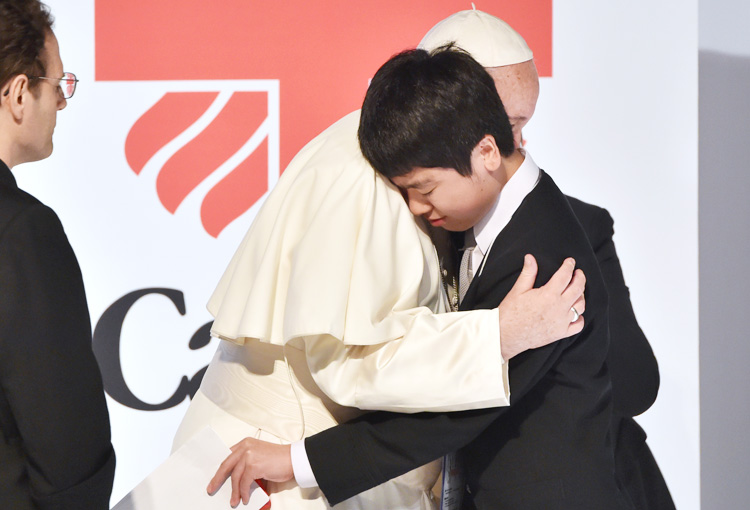 Pope Francis and a student hug each other during a meeting with the victims of triple disaster in Tokyo on Monday.

In 2016, the Catholic Bishops’ Conference of Japan made a statement appealing for the abolition of the plants.

After the meeting, Kamoshita told reporters he had been invited to the Vatican earlier this year and the pope had remembered meeting him.

Francis then met with hundreds of flag-waving youth in a Tokyo cathedral, calling on them to reach out to others and not to isolate themselves.

“We have invented all sorts of gadgets but we still can’t take selfies of the soul,” he said, during a relaxed speech, during which he strayed frequently from the prepared text and joked with the crowd. 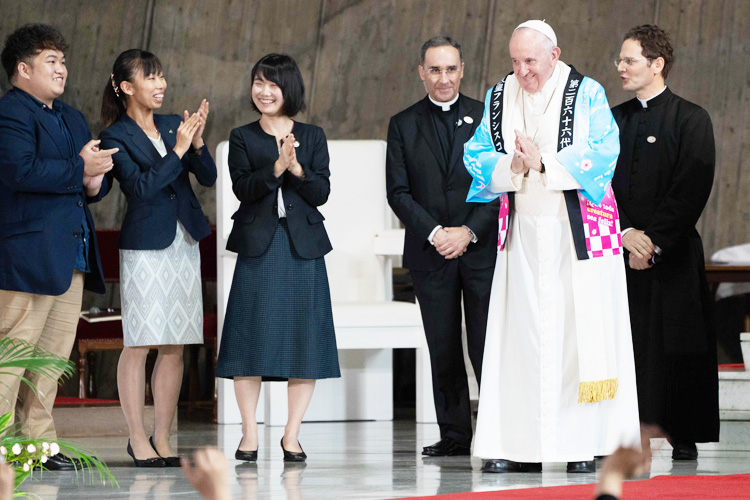 He even tried on a colourful traditional Japanese shirt over his white robes, drawing cheers and a papal thumbs-up.

To a young man who said he had been called “fatso” by bullies at school, Francis said he should respond to them that being skinny is much less healthy.

Later Monday, the pope, who has described his “fondness and affection” for Japan, will hold a Mass in the huge Tokyo Dome stadium.

There are also rumours he may meet a death row convict and make comments criticising the death penalty, which is carried out in Japan with significant public support.

The emotional centrepiece of his four-day trip was his initial trip to Nagasaki, a city forever associated with the dropping of a nuclear bomb that eventually killed at least 74,000 people.

There, the Argentine lashed out at the concept of nuclear deterrence and prayed in the rain for the victims of those killed in the “unspeakable horror” of the bomb.

He then travelled to Hiroshima, the first city to suffer an atomic attack, where he denounced as a “crime” the use of nuclear power as a weapon.

The final day of his trip on Tuesday takes in meetings with young students at Sophia University before he concludes his Asian tour.

The first leg of the tour was in Thailand — like Japan, a country with a small Catholic minority. There are an estimated 440,000 Japanese Catholics. 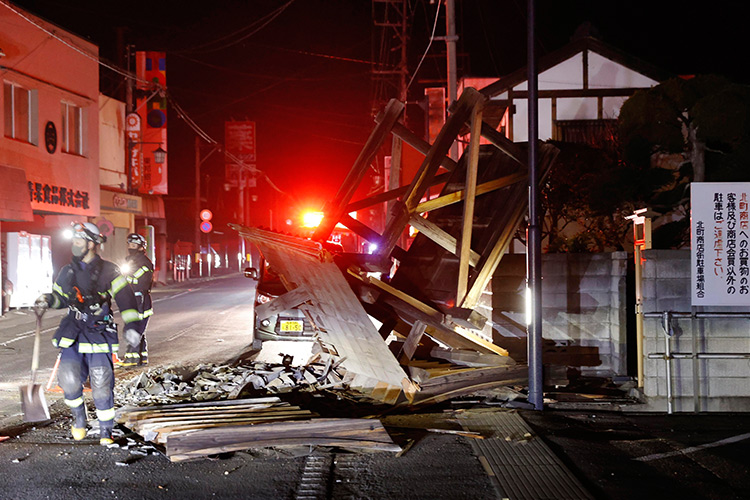 The quake produced powerful shaking along parts of Japan's eastern coast, and was felt strongly in Tokyo, but triggered no tsunami alert. 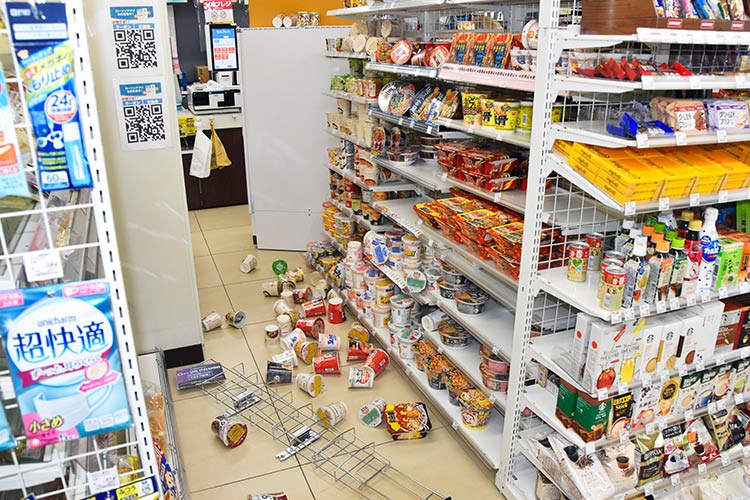 The agency issued a tsunami advisory for up to a meter (3-foot) sea surge in parts of Miyagi and Fukushima prefectures. NHK national television said the tsunami might have reached some areas already.