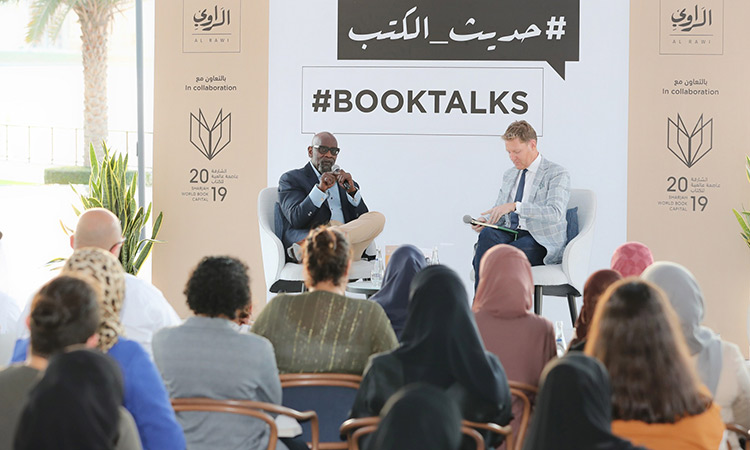 Chris Gardener answers a question during the lauch of his book Al Rawi Café, Sharjah.

The global icon of inspiration, acclaimed American author and motivational speaker, Chris Gardener took centre stage at the #BookTalks event, part of the year-long Sharjah World Book Capital 2019 celebrations organised on Friday)at Al Rawi Café, to launch the Arabic edition of his best-selling novel, The Pursuit of Happyness, published by Rewayat – an imprint of the UAE-based Kalimat Group.

A vibrant Q&A took place before a packed audience, where presenter Richard Dene asked Gardener a series of questions, discussing his early life, his struggles as a child and later on as a single parent, homelessness for over a year, and his triumphant spirit that pushed him through in his pursuit of happiness.

To begin, the author expressed his joy about being in Sharjah, which he described as ‘the place of peace’.

Upon being asked by Dene about the reason to dedicate more than one-thirds of his book to his struggles and only the final section to his success story, Gardener responded: “It was important to me because there was a certain degree of credibility I brought to my story".

He added: “My dear friend Maya Angelou said, ‘This is not about you; this is a book about us’. The book is a story of my life and really a ‘book of us’. When you gather the courage to speak about the adversities you’ve overcome, you change people’s lives forever; many of them you will never meet. I kept in mind to be honest through it all.”

Talking about his days in the US Navy, the author said his experiences as a young man in the naval services were priceless.

“They were much more than I could have ever had in the best graduate schools”, adding that he transferred all the skills he’d picked up on his first job to his next one at the Silicon Valley in the mid-70s when the tech industry was in its infancy.

Just as things started settling in life – an income of US$ 30,000 a year, marriage to the love of his life, becoming a father to Chris Jr, “everything that could go wrong went wrong at the same time. That’s the definition of life”, Gardener continued.

He quit his job hoping to find one at the Wall Street to become a stock broker. His marriage were rocky too. Jobless, he didn’t have enough money to pay rent. “Came back from a job interview one day and saw that my wife Jackie was gone, my baby Chris Jr was gone, car – everything gone. I hit rock bottom”.

With a US$ 1,000 pay a month as a stock broker just outside San Fran and being a single parent to a young boy was the hardest thing. I had to leave my 5-year-old son with someone I did not know at the day care centre. Having my child with me was my ‘pursuit of happyness’”, he said.

Upon being asked the all-important question from the audience about whether happiness could be measured, the author’s answer was: “Yes. The best measure of happiness is your life, your state of mind, and how your children turn out.”

Organised by Al Rawi Bookstore & Café in collaboration with the Sharjah World Book Capital Office (SWBC Office), #BookTalks events are monthly gatherings that aim to promote a culture of reading among community members and help them develop a deeper literary understanding and appreciation through their interactions with prominent Arab writers and authors who are invited to speak at these events.