US President Trump brushes off the impeachment inquiry - GulfToday

US President Trump brushes off the impeachment inquiry 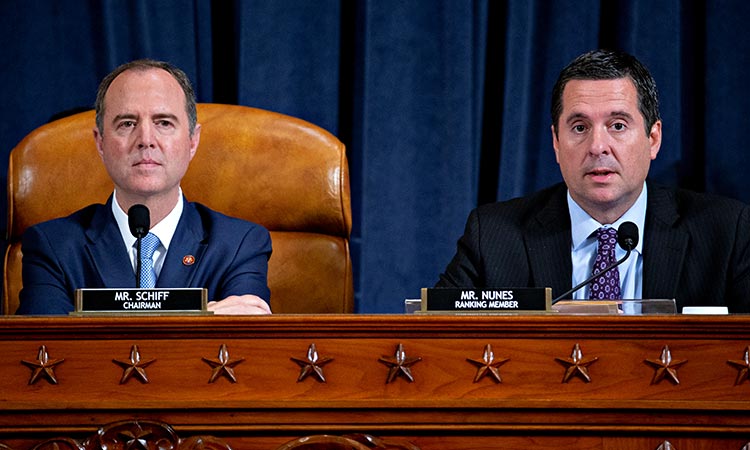 Offering his own take on five long days of public hearings, President Donald Trump brushed off the impeachment inquiry as "total nonsense” on Friday and bad-mouthed a number of the US diplomats who testified to Congress about his Ukraine pressure campaign.

In one breath, Trump said House Democrats looked like "fools” during the hearings on Capitol Hill. In another, he offered a window into his political strategy ahead of an expected House vote to impeach him. If that happens, the Senate would hold a trial on whether to oust him from office. 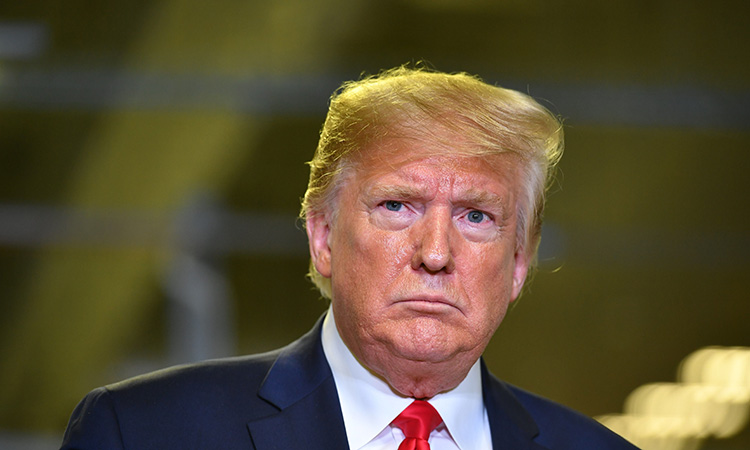 "I think we had a tremendous week with the hoax,” Trump said at the White House.

At the same time, he talked up debunked conspiracy theories that Ukraine interfered in the 2016 election, speaking just one day after a former White House adviser testified that the claim was a "fictional narrative” that played into the hands of Russian President Vladimir Putin. Trump also repeated claims that Obama administration officials spied on his campaign and underscored the need to keep Republicans unified against impeachment.

"I don’t think I’ve ever seen support in the Republican party like we do right now,” he said. 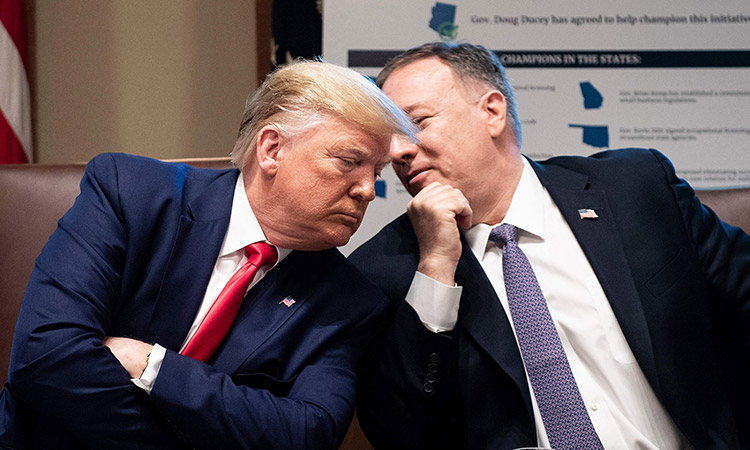 Donald Trump (left) listens to US Secretary of State Mike Pompeo during a Cabinet Meeting on Friday. AFP

In a 57-minute, animated phone interview on "Fox & Friends,” Trump said he did not expect to be impeached. But he added that if the House did vote to impeach him, he would welcome a trial in the Republican-led Senate.

A trial, he said, would give Republicans a chance to question Rep. Adam Schiff, D-Calif., who led the hearings as chairman of the House intelligence committee. Procedures for a Senate trial still are being worked out, but Republicans may well be hesitant to adopt Trump's idea of turning a lawmaker into a witness. 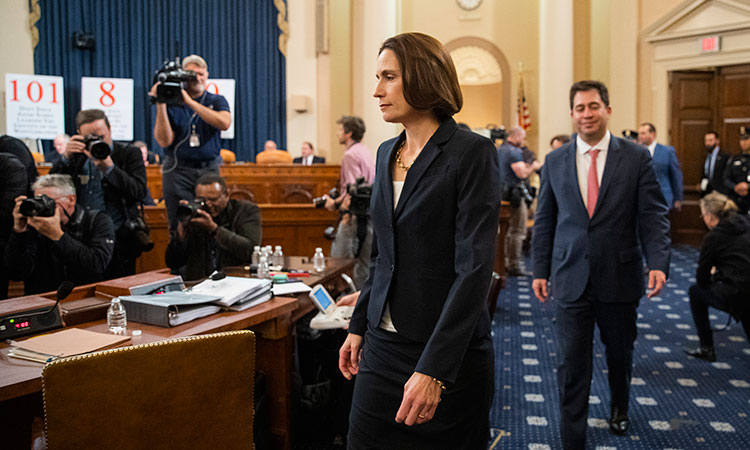 Trump’s professed confidence came after impeachment witnesses testified under oath that the president withheld aid from Ukraine to press the country to investigate his political rivals. Trump insisted he was trying to root out corruption in the Eastern European nation when he held up nearly $400 million in military aid to help Ukraine battle Russian aggression.

"I think it’s very hard to impeach you when they have absolutely nothing," Trump said.

He denied there was any quid pro quo, extortion or bribery. He also denied holding up a White House meeting or military aid to get Ukrainian President Volodymyr Zelenskiy to launch investigations of former Vice President Joe Biden and his son’s dealings in Ukraine.

Uncowed by witnesses who warned against playing into the Russians’ hands, Trump repeated a debunked conspiracy theory that Ukrainians might have hacked the Democratic National Committee’s network in 2016 and framed Russia for the crime.

"They gave the server to CrowdStrike, which is a company owned by a very wealthy Ukrainian,” Trump said. "I still want to see that server. The FBI has never gotten that server.”

Trump’s claim on Ukraine being behind the 2016 election interference has been discredited by intelligence agencies and his own advisers.

CrowdStrike, an internet security firm based in California, investigated the DNC hack in June 2016 and traced it to two groups of hackers connected to a Russian intelligence service - not Ukraine. The company’s co-founder Dmitri Alperovitch is a Russian-born US citizen who immigrated as a child and graduated from the Georgia Institute of Technology. 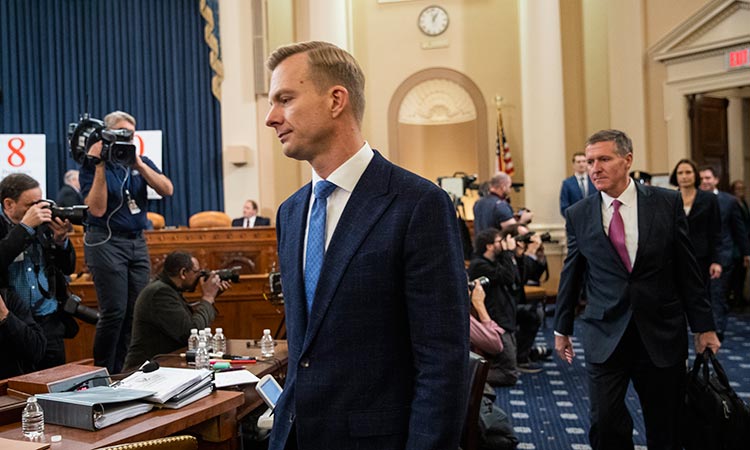 David Holmes and Fiona Hill walk to their seats to testify. AP

Fiona Hill, a former Russia adviser on the White House National Security Council, admonished Republicans in her testimony on Thursday for pushing unsubstantiated conspiracy theories about Ukrainian interference in the 2016 presidential election.

"This is a fictional narrative that has been perpetrated and propagated by the Russian security services themselves,” Hill said.

Trump continued to distance himself from other impeachment witnesses, including Gordon Sondland, US ambassador to the European Union. 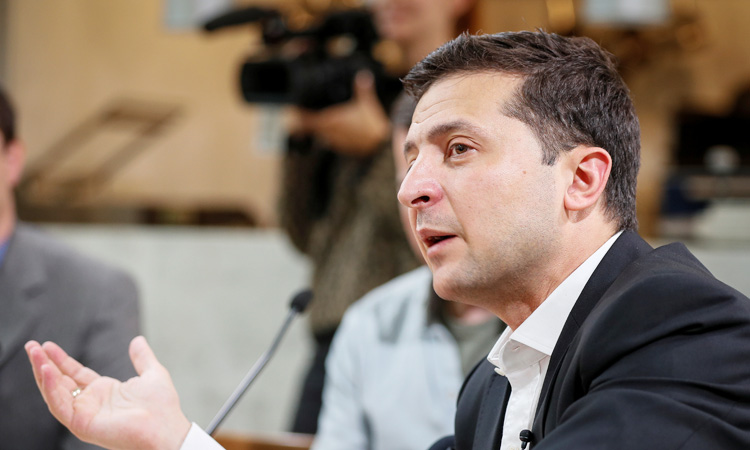 Sondland said he was working on a deal to arrange a White House visit if Zelenskiy publicly announced investigations into Burisma, a Ukrainian gas company. Democrat Joe Biden’s son Hunter was a Burisma board member.

Speaking of Sondland, Trump said, "I hardly know him, OK? I’ve spoken to him a few times.”

The president said Sondland left out of his opening statement his account of a phone conversation in which Trump said: "I want nothing. No quid pro quo. Have Zelenskiy do whatever is right.”

Sondland "didn’t put that in,” Trump said. "That was the end of him. I turned off the television.”

He also denigrated the testimony of David Holmes, a counselor at the US embassy in Kyiv. Holmes testified that he overheard a different phone conversation Sondland had with the president. Holmes said he heard the president talking loudly about Zelenskiy, asking, "So, he’s gonna do the investigation?” Ambassador Sondland replied that "He’s gonna do it.”

Trump said he didn’t believe Holmes could hear the conversation since it wasn’t on a speaker phone. "That was a total phony deal,” Trump said.

And Trump continued to disparage former US ambassador to Ukraine Marie Yovanovitch. Trump recalled her from her post in Kyiv before her tenure was to end. Trump called her an "Obama person” and claimed she didn’t want his picture to hang on the wall of the embassy.

Ian Kelly, the former US ambassador to Georgia, tweeted in Yovanovitch’s defense, saying: "Our official White House portraits did not arrive at Embassy Tbilisi until March 2018. This was because the WH (White House) was late getting them to all embassies.”

Trump said he asked why some administration officials were being so kind to Yovanovitch. He claimed they told him, "Well, sir, she’s a woman. We have to be nice.”