Everyone in Lahore at risk due to dense smog: Amnesty - GulfToday

Everyone in Lahore at risk due to dense smog: Amnesty 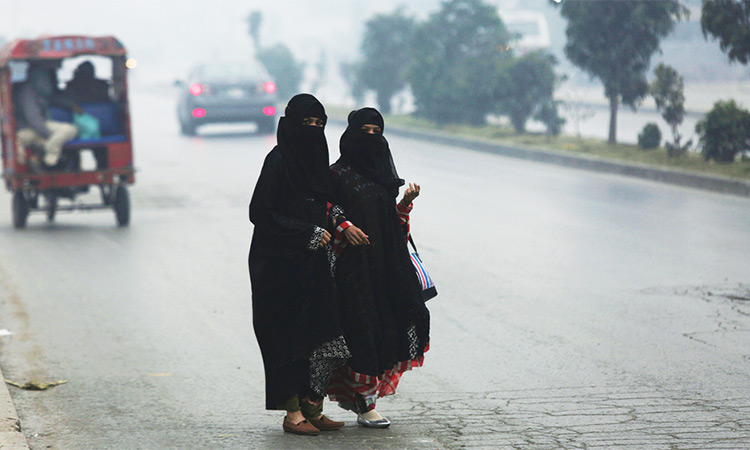 Women cross a road engulfed in smog in Lahore on Friday. Associated Press

The Amnesty International (AI) has issued an urgent action warning for the hazardous smog that has been engulfing Lahore, saying every resident of the city is at risk due to the poor air quality.

The unprecedented step is aimed at mobilising supporters around the world to campaign on behalf of Lahore’s population to seek relief from the authorities, the AI said in a statement.

Lahore topped the list of the world’s most polluted cities for the second consecutive day on Friday. Around 8am, the city’s air quality was recorded by Air Visua to be 385, which is classified as “unhealthy.” The Punjab government, for the third time this month, announced the closure of schools due to “dense smog” in three districts, including Lahore, Faisalabad and Gujranwala.

“The issue is so serious that we are calling on our members around the world to write to the Pakistani authorities to tell them to stop downplaying the crisis and take urgent action to protect people’s health and lives. Urgent actions are a campaigning tool that Amnesty International uses to mobilise support internationally for victims of human rights violations and for prisoners of conscience.”

The organisation noted that for one in every two days this month, the air quality in Lahore has been classified as hazardous by air quality monitors installed by the United States Consulate in Lahore and the Pakistan Air Quality Initiative. The situation also forced the Punjab government to shut schools down on three occasions this month.

The Air Quality Index (AQI) in Lahore reached 580 at 11pm on Nov.7. Since the beginning of the month, at least seven days have seen air quality reach hazardous levels.

“Lahore has not had a single day of healthy air this year,” Amnesty said, citing information from the Pakistan Air Quality Initiative, a citizen-led effort that crowd sources and collates data on air quality.

It noted that in view of the alarming situation, a group of teenage students earlier this month filed a suit against the Punjab government in the Lahore High Court for the “violation of their fundamental right to a clean and healthy environment.”

In the petition, the three students said the government had been downplaying the scale of crisis because its standards of measurement differ from the ones used in other countries and accepted internationally.

“Today, people are not aware of just how much danger they are in because of the air they breathe. If the expertise is available, if the consequences are dire, if the evidence of the damage is mounting, then the government must not waste time. A good starting point would be to acknowledge the risks of the quality of air and initiate smog protection protocol as recommended by the court-appointed Smog Commission,” said the petition.

Separately, it was reported that Pakistan is grappling with drug-resistant typhoid outbreak.

Doctors suspected typhoid, but when the most common antibiotics failed to work, the boy’s family began to panic.

Sajjad is one of more than 11,000 people, mostly children, to have contracted a drug-resistant strain of the infection in the country since 2016, and which experts say risks spreading internationally.

He survived, but hundreds have died, predominantly in the southern province of Sindh.

In response Pakistan’s government, already battling outbreaks of polio and dengue, has launched a huge foreign-funded vaccination drive that began on Nov.15.

Some 3.4 million children have been vaccinated in the last four days in Karachi and the neighbouring city of Hyderabad where the outbreak was first reported, said James Fulker, a spokesman for GAVI, a Geneva-based partnership funded by the Bill & Melinda Gates Foundation that is administering the vaccine.