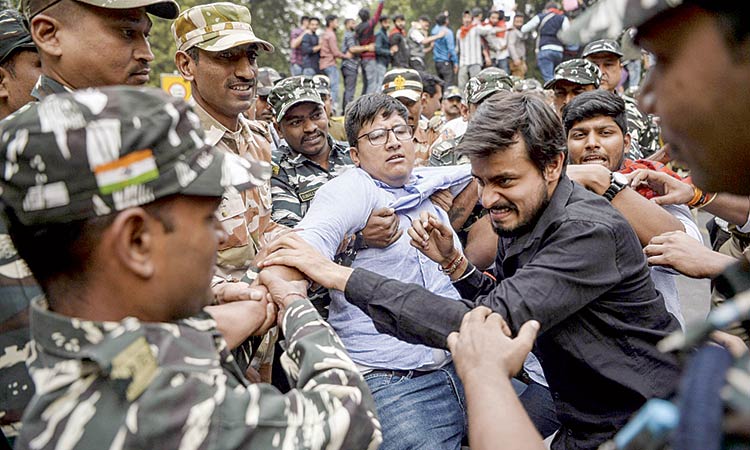 Security personnel detain students during a demonstration in support of JNU students in New Delhi on Thursday. Agence France-Presse

Several students, including top members of RSS student wing ABVP and the DUSU, were detained after a scuffle between protesters and security personnel near the Parliament Street police station on Thursday during a march to the HRD Ministry to oppose the proposed JNU hostel fee hike.

Delhi Police had imposed prohibitory orders in the area and put up triple layer of barricades. Some protesters, however, climbed over the barricades and scuffled with the security personnel, who comprised CRPF personnel along with Delhi Police.

The protesters raised slogans against the JNU administration and the HRD Ministry who, according to students, had unilaterally imposed fee hike on the students.

“First of all, we are not the student wing of BJP, and we have always stood for students no matter which party leads the government,” Siddharth Yadav said during the march from Mandi House to the HRD Ministry.

“We are here to stand for students’ right and we demand resignation of HRD Minister Ramesh Pokhriyal on this issue,” he added.

Students of the Jawaharlal Nehru University (JNU) have been protesting for the past several days demanding a complete rollback of a proposed hike in hostel fees, along with reconvening of the Inter-Hall Administration meeting that had passed the proposed fee hike on Oct.8.

The JNU Students Union (JNUSU) also demanded the resignation of Vice Chancellor Mamidala Jagadesh Kumar, claiming he had lost the faith of students and the teachers.

The police action caused injuries to many students, many of whom had blood streaming down their faces − for their part, the police said many among them were injured in the clashes.