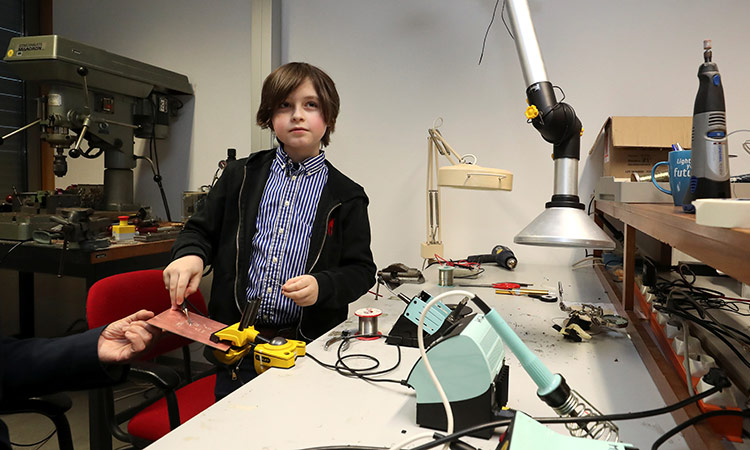 Laurent Simons is seen in a laboratory at the University of Technology in Eindhoven, Netherlands, on Wednesday. Yves Herman / Reuters

As he cradles his young puppy in his arms, Laurent Simons looks much like any other 9-year-old boy. Then he starts describing his work at a university in the Netherlands, developing a computer circuit that will replicate a part of the brain.

"What we are doing is placing neurons and making connections to see what the reaction is to medication in a part of the brain," he says of the brain-on-chip project, which combines the biomedical and electrical engineering fields.

With an IQ of 145, the Belgian boy wonder is on track to become the world's youngest university graduate when he completes a bachelor's degree in electrical engineering at Eindhoven's University of Technology next month.

"I'm planning to start my PhD and study a little medicine, but before that vacation," he said of his post-graduation plans, as 9-week-old puppy Sammy dozed in his mother Lydia's arms.

After completing high school in roughly a year, Laurent - born in Belgium but now living in the Netherlands - started university and is set to finish the three-year bachelor's programme in just nine months. 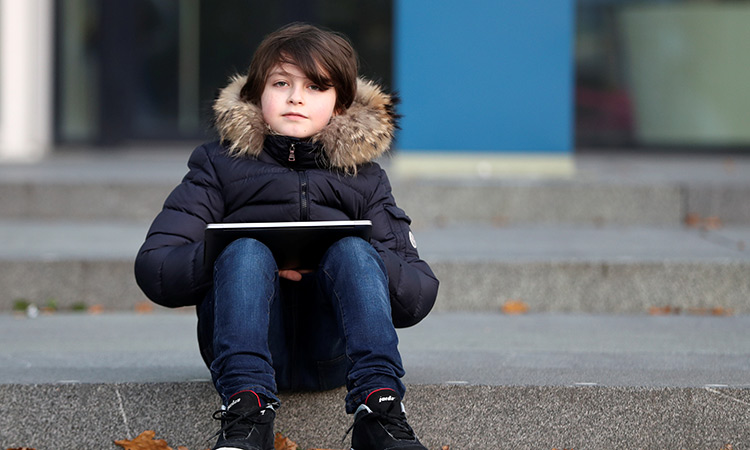 Laurent Simons poses at the University of Technology in Eindhoven, Netherlands, on Wednesday.  Reuters / Yves Herman

"Every professor is really enthusiastic about having Laurent and for us it's a unique situation of course because he's the youngest student we've ever had," said programme director Sjoerd Hulshof.

"The speed of his mind - we cannot imagine what is happening in his head. He's maybe three times smarter than the smartest student we've ever had." Currently the youngest person to obtain a college degree is American Michael Kearney, who achieved the feat in June 1994 at the age of 10 years 4 months, according to the Guinness Book of World Records.

When he's not at the university, Laurent says he walks the dog, plays video games Minecraft and Fortnite or posts pictures on Instagram.

Inspired by Serbian-American inventor Nikola Tesla, he plans to research artificial organs, and ultimately develop an entire artificial body in his own laboratory. "My grandparents are heart patients," he explained of the choice.

Offers are flooding in from universities around the world and Laurent's parents are helping him weigh the options, with the US west coast currently a favourite destination.

His father, Alexander, doesn't dare predict Laurent's future because he has smashed every expectation so far - but stressed there was no hurry.

"What he's doing now is playing with education, just playing around," he said. "And that's fine with us."