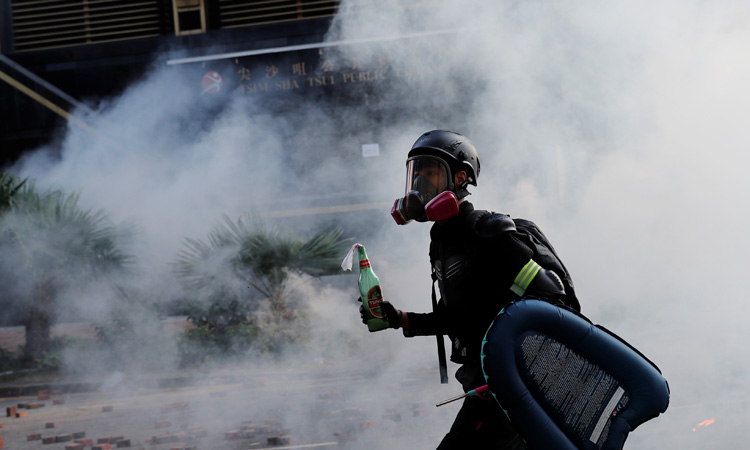 A protester carries a molotov cocktail near Hong Kong Polytechnic University during clashes with police in Hong Kong on Monday. Tyrone Siu/ Reuters

Hong Kong police fired tear gas at protesters as they tried to escape a besieged university on Monday while hundreds more pro-democracy activists stayed inside armed with petrol bombs and other weapons awaiting an expected operation to oust them.

Protesters inside Polytechnic University faced off against a police water cannon and armoured vehicles. Police threatened to fire live bullets if “rioters” did not stop using lethal weapons.

Protesters have blocked one of the city’s major highways, the Cross Harbour Tunnel linking Hong Kong island to the Kowloon peninsula, for much of the past week. 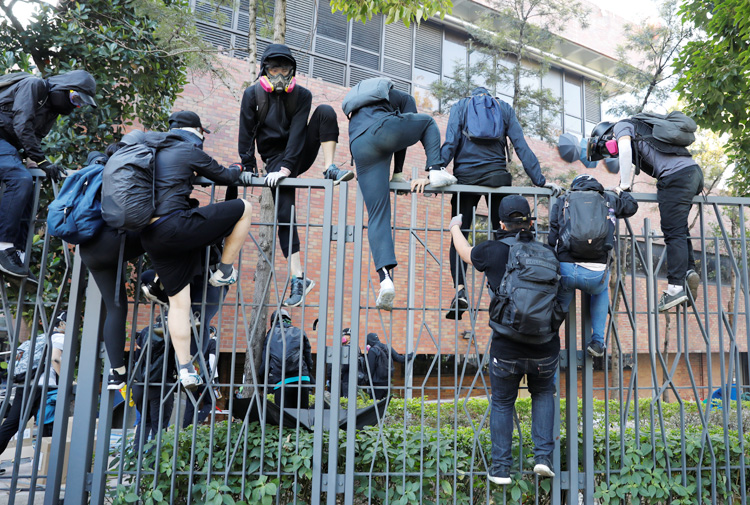 Following is the latest news from the protests:

- 10:22am on Monday (0222 GMT): The United States condemned the “unjustified use of force” in Hong Kong and called on Beijing to protect Hong Kong’s freedom.

- 0152 GMT on Monday: Hong Kong Polytechnic University student union acting president Ken Woo says at least 500 people are still inside the campus and he believed some 70-100 intended to leave but were pushed back as police fired volleys of tear gas - Broadcaster RTHK cited Woo as saying in a programme.

- 2256 GMT on Sunday: MTR Corp says East Rail Line between Hung Hom and Lo Wu/Lok Ma Chau stations at the border will be in service but it may suspend or adjust services.

- 2255 GMT on Sunday: Transport Department says Cross Harbour Tunnel and major roads in Yau Ma Tei, Tsim Sha Tsui and Mong Kok are closed, while about 170 sets of traffic lights are under repair.

- 2241 GMT on Sunday: Police clarify that no “raiding” operation was conducted inside Polytechnic University. Police appeal to everyone inside the campus to leave immediately.

- 2154 GMT Sunday: Police say three shots were fired in early hours in Jordan Road as “rioters” attacked two police officers when they escorted an arrested 20-year-old woman to an ambulance. Police say the shots did not hit anyone but the woman escaped.

- 1842 GMT Sunday: Police warn drivers not to use their vehicles to block roads in Tsim Sha Tsui and Jordan districts and obstruct police operation.