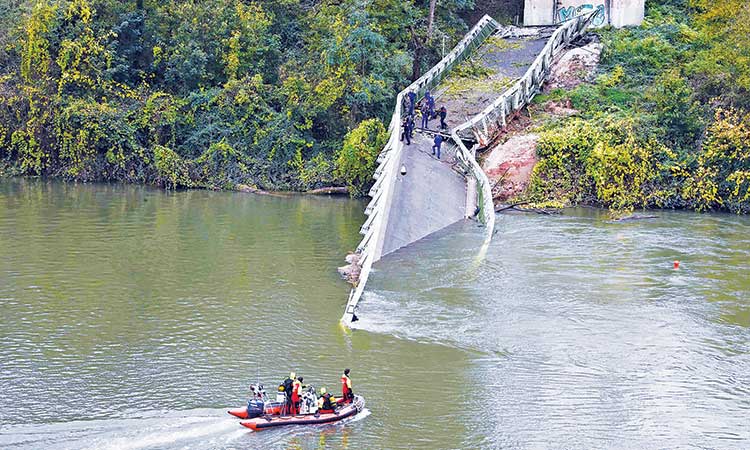 Rescuers sail near a suspension bridge, which collapsed on Monday in Mirepoix-sur-Tarn, near Toulouse, southwest France. Agence France-Presse

A 15-year-old girl died and a truck driver was missing after a suspension bridge over a river in southwest France collapsed on Monday, reigniting a debate over infrastructure safety in the wake of last year’s disaster in Genoa.

A truck and a car plunged into the Tarn river after the bridge between the towns of Mirepoix-sur-Tarn and Bessieres, 30 kilometres (18 miles) north of Toulouse, gave way.

The bridge collapsed from the suspension cables and crashed into the waters of the Tarn, where only a small portion was left exposed above the river.

The girl was travelling in the car with her mother, who was plucked from the water by bystanders, Toulouse public prosecutor Dominique Alzeari said.

Five people, including two rescue workers and some local people who tried to save the victims, were seriously injured, according to the region’s security department.

Over 60 rescue workers, including divers, were searching for the driver of the truck and also checking whether any other vehicles were on the bridge at the time of the accident. The bonnet of the sunken car could be seen sticking out of the water as helicopters circled overhead.

The authorities had earlier said that a van might also have fallen into the river and that “several” people might be missing. But Alzeari said “that does not appear to be the case.”

An investigation into the cause of the collapse was under way.

The environment ministry said that recent inspections of the bridge had “shown no security defects”.

The council of the local Haute-Garonne area said the bridge, which dated to 1931 and had been renovated in 2003, underwent a “thorough” inspection in 2017 showing “no structural problem”.

A visual inspection of the 155-metre (510-foot) structure, some 6.5 metres wide, confirmed that conclusion in 2018, the environment ministry said.

Mirepoix-sur-Tarn mayor Eric Oget described it as a “very important crossing point” for people going to work in the regional capital Toulouse on the other side of the river.

Many pedestrians used the bridge, he said, describing its collapse as a “real trauma” for the local population.

Audrey Laujac, a 36-year-old woman who lives 100 metres (yards) from the scene of the accident, told AFP her son had just taken the school bus across the bridge before it collapsed.

“We never imagined that the bridge might collapse,” she said, her voice choked with emotion.

Oget said articulated lorries were not allowed onto the bridge but that some had nonetheless been seen crossing over in the past.

Police on Monday searched the premises of the drilling company that owned the truck to try to establish whether it was within the 19-tonne load limit allowed on the bridge.

The issue of bridge safety was thrust into the spotlight in Europe after the collapse of a motorway bridge in the Italian city of Genoa in August 2018, in which 43 people died.

An audit of France’s bridges commissioned by the Senate in the wake of the Genoa disaster called for major investments to avoid a similar tragedy in France.

“Unfortunately what happened illustrates what we said in the report, which is that the state of our bridges poses a real danger,” Senator Herve Maure, who oversaw the audit, told AFP.

“If a bridge which is not listed as dangerous collapses, what is the situation of those bridges which were clearly identified as dangerous in the report?” he asked.

Toulouse prosecutor Dominique Alzeari said the girl’s mother was rescued by witnesses after several vehicles, including hers, fell into the Tarn River on Monday morning near the village of Mirepoix-sur-Tarn.

He said rescuers were still searching for a truck driver whose vehicle also fell in the river. He said five people were injured in the collapse, including two firefighters at the scene.

Prime Minister Edouard Philippe, on a visit to Senegal, deplored the “tragic accident.” The bridge had been renovated in 2003 and its last safety check was in 2017.

An investigation into the cause of the collapse has been opened.