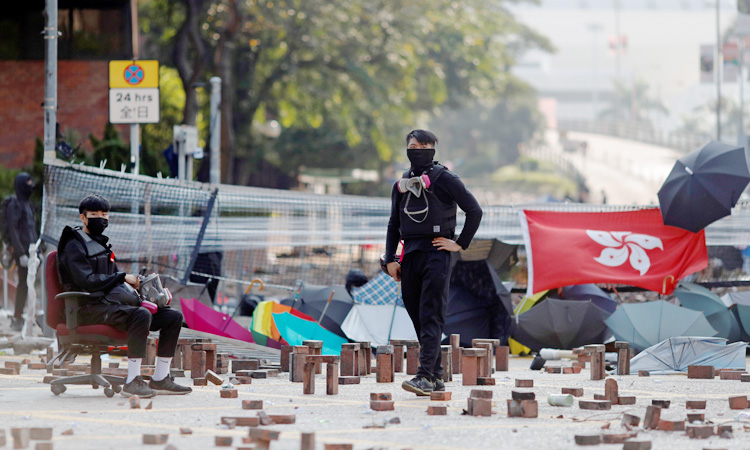 Protesters keep watch at a barricade outside the Hong Kong Polytechnic University in Hong Kong on Friday. Thomas Peter/ Reuters

The Hong Kong government condemned on Friday an attack by a “violent mob” on the city’s justice secretary in London, the first direct altercation between demonstrators and a government minister during months of often violent protests.

Secretary for Justice Teresa Cheng, who was in London to promote Hong Kong as a dispute resolution and deal-making hub, was targeted by a group of protesters who shouted “murderer” and “shameful.”

A statement by the Hong Kong government said Cheng suffered “serious bodily harm” but gave no details. Video footage of the incident showed Cheng falling to the ground.

Hong Kong’s leader Carrie Lam said in a statement she strongly condemned what she described as an attack on Cheng.

The Hong Kong government said in a separate statement: “The secretary denounces all forms of violence and radicalism depriving others’ legitimate rights in the pretext of pursuing their political ideals, which would never be in the interest of Hong Kong and any civilised society.”

The incident came amid escalating violence in Chinese-ruled Hong Kong, where a student protester died earlier this month after falling from a parking lot during demonstrations.

A 70-year-old street cleaner, who videos on social media showed had been hit in the head by a brick thrown by “masked rioters,” died on Thursday, authorities said.

The Food and Environmental Hygiene Department expressed profound sadness on Friday at the death of its cleaning worker and said it was providing assistance to his family.

Anti-government protesters paralysed parts of Hong Kong for a fifth day on Friday, forcing schools to close and blocking some highways as students built barricades in university campuses and authorities struggled to tame the violence.

Protesters used barriers and other debris to block the Cross-Harbour Tunnel that links Hong Kong island to Kowloon district, leading to severe traffic congestion. The government once again urged employers to adopt flexible working arrangements amid the chaos.

Thousands of students remain hunkered down at several universities, surrounded by piles of food, bricks, petrol bombs, catapults and other homemade weapons.

Police said the prestigious Chinese University had “become a manufacturing base for petrol bombs” and the students’ actions were “another step closer to terrorism.”

Around 4,000 people, aged between 12 and 83, have been arrested since the unrest escalated in June.

The demonstrations have paralysed parts of the city and battered the retail and tourism sectors, with widespread disruptions across the financial centre and no end in sight to the violence and vandalism.

The protests escalated in June over a now-scrapped extradition bill that would have allowed people to be sent to mainland China for trial. They have since evolved into calls for greater democracy, among other demands.

The months-long protests have plunged the former British colony into its biggest political crisis in decades and pose the gravest popular challenge to Chinese President Xi Jinping since he came to power in 2012. Xi, speaking in Brazil on Thursday, said stopping violence was the most urgent task for Hong Kong.

The territory is also expected to confirm on Friday it has fallen into recession for the first time in a decade amid concerns the economy could be in even worse shape than feared as the anti-government protests take a heavy toll.

Alibaba Group Chairman Daniel Zhang, however, said Hong Kong’s future is “bright” as the e-commerce giant kicked off a retail campaign for its secondary listing in the city.

Many in Hong Kong are angry at what they see as China stifling freedoms guaranteed under the “one country, two systems” formula put in place when Hong Kong returned to Chinese rule in 1997.

China denies interfering in Hong Kong and has blamed Western countries, including Britain and the United States, for stirring up trouble.

A congressional advisory body urged the US Congress on Thursday to enact legislation that would suspend the special economic status Hong Kong enjoys under US law if China deploys forces to crush the protests.

The Hong Kong government reiterated that foreign governments should not interfere in the city’s internal affairs. 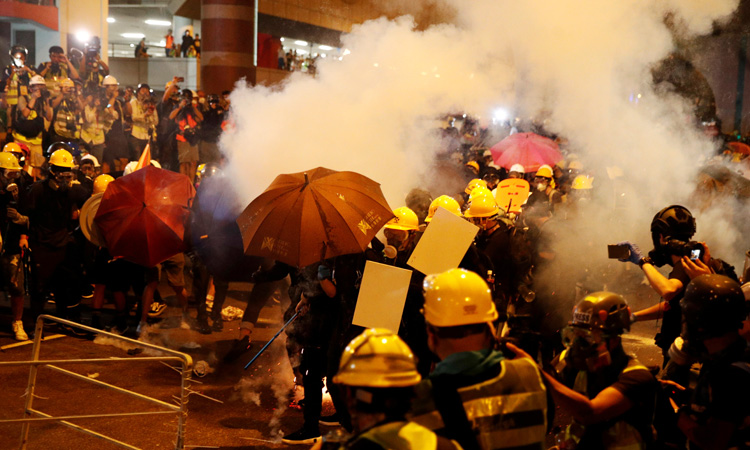 The city’s roiling unrest took a dark turn late on Sunday when gangs of men — most wearing white t-shirts and carrying bats, sticks and metal poles — set upon anti-government demonstrators 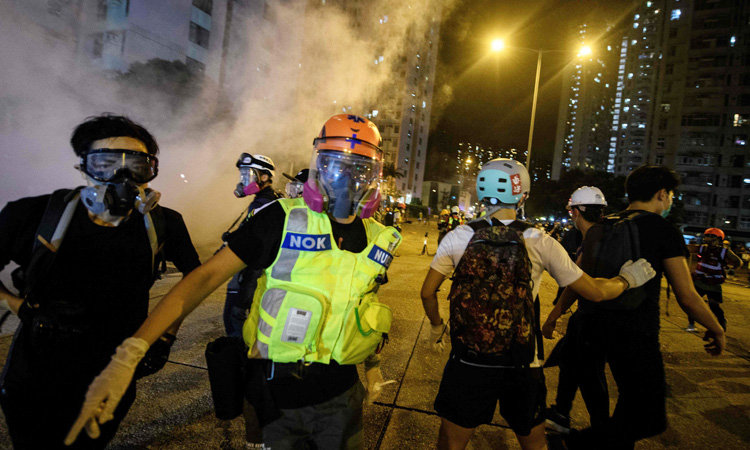