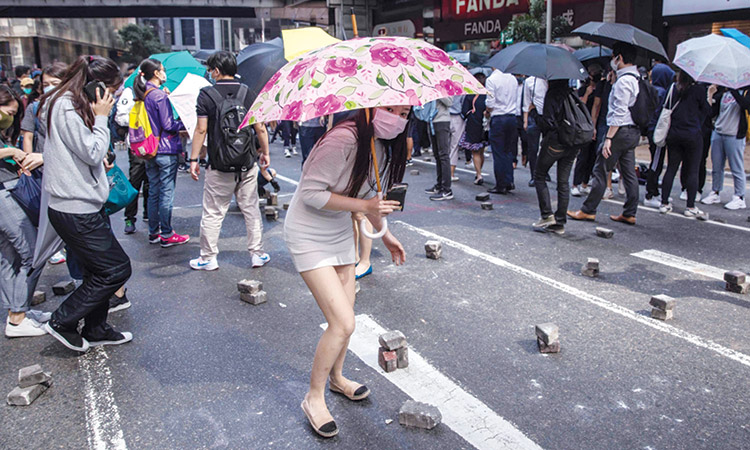 Protesters and office workers gather during a rally in the central district in Hong Kong on Wednesday. Reuters

Hong Kong anti-government protesters paralysed parts of the Asian financial hub for a third day on Wednesday, with some transport links, schools and many businesses closing as police warned of a rise in violence to a deadly level.

About 1,000 protesters blocked roads in the heart of the city’s Central business district at lunchtime. Wearing now-banned face masks and dressed in office wear, they marched and hurled bricks onto roads lined with some of the world’s most expensive real estate and luxury flagship stores.

“It’s now 1989 4th June,” was scrawled on the windows of fashion store Georgio Armani, a reference to the crackdown by Chinese troops on pro-democracy protesters in Beijing’s Tiananmen Square.

Scores of riot police tried to disperse the crowds near the stock exchange, wrestling some people to the ground and beating others with batons.

Protesters and police had battled through Tuesday night at university campuses only hours after a senior police officer said the Chinese-ruled city had been pushed to the “brink of a total breakdown.”

Protesters are angry about what they see as police brutality and meddling by Beijing in the freedoms guaranteed under the “one country, two systems” formula put in place when the former British colony returned to Chinese rule in 1997.

Many campuses remained tense on Wednesday with students setting up barricades. Some perched on bridges to keep guard while others checked people coming in.

Rows of riot police, some in trucks, watched the students but did not try to break through. The protests typically get more violent as night falls.

“The youngsters are really the future of Hong Kong so even though I’m worried about being checked by the police I still want to come and support them,” said Cheung, a 30-year-old alumni bringing supplies including food to one campus.

Hong Kong’s Education Bureau said all schools would shut on Thursday. Several universities said they would be introducing online learning and other assessment methods for the remaining weeks of the term.

On Tuesday, there were chaotic scenes through the night at the prestigious Chinese University, with explosions, plumes of smoke, yelling and sustained firing of tear gas and rubber bullets during which scores were injured.

Police said they helped a group of mainland students flee Chinese University’s campus by boat on Wednesday after they expressed concern about their safety.

The flare-ups came after police shot a protester at close range on Monday and police said “rioters” doused a man with petrol and set him on fire in some of the worst violence since protests picked up in June. Police are investigating.

He said some university campuses were being used to make petrol bombs and to shelter “rioters and criminals.”

“Nowhere in Hong Kong is a lawless land.” The turmoil caused delays for thousands of commuters who queued at metro stations across the city early on Wednesday after some railway services were suspended and roads closed.

Police said 142 people had been arrested since Tuesday, bringing the total number of arrests to more than 4,000.

Hong Kong’s Hospital Authority said 81 people had been injured since Monday, with two in serious condition. The youngest was 10 months old but the cause of the infant’s injuries was not known.

“It is very painful to watch my city turn into this. Look at everyone, how angry they are,” said Alexandra, a 42-year-old insurance executive who had been trying to get to work.