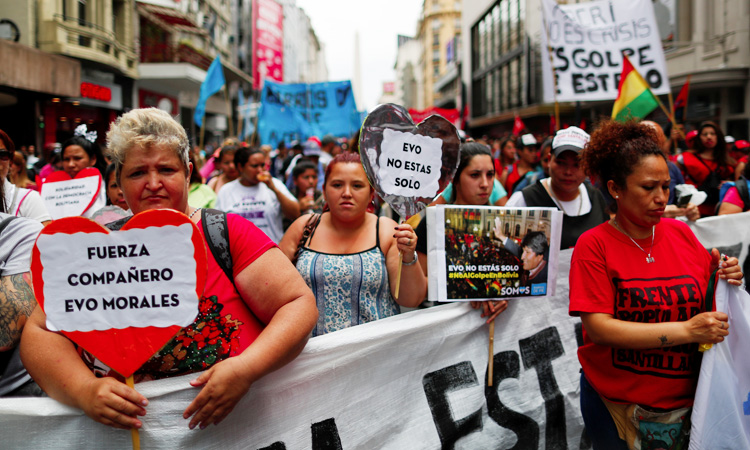 Demonstration in support of Evo Morales after he announced his resignation on Sunday, in Buenos Aires. Agustin Marcarian/ Reuters

Bolivia’s former president, Evo Morales, was flying to Mexico on Tuesday after fleeing his South American homeland, seeking refuge under a leftist government that has supported the veteran socialist in the wake of a disputed election.

“His life and integrity are safe,” Ebrard wrote on Twitter, after warning Morales was in danger and saying Mexico would offer asylum as part of its long tradition of sheltering exiles. 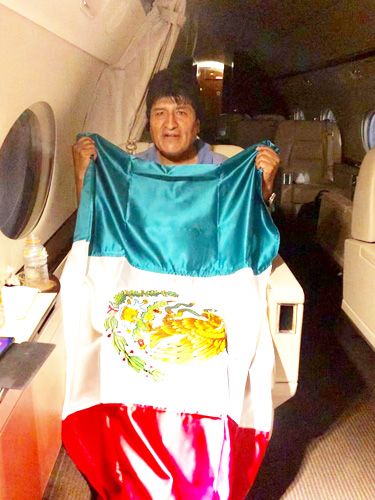 Evo Morales holds a Mexican flag onboard a Mexican government's aircraft on Monday.

The Mexican government’s support has helped cement its emerging role as a bastion of diplomatic support for left-wing leaders in Latin America.

Morales, who governed for 14 years, said on Twitter he was thankful to Mexico but saddened to leave Bolivia for political reasons, following weeks of violent protests and unrest.

In a photo tweeted by Ebrard, Morales is seated alone on the jet with a downcast, unsmiling expression, displaying Mexico’s red, white and green flag across his lap.

Morales’ government collapsed on Sunday after ruling party allies quit and the army urged him to step down, a tactic that Mexico’s government said it views as a “coup” because it broke with Bolivia’s constitutional order.

Mexican President Andres Manuel Lopez Obrador praised Morales for the decision to resign rather than put the lives of Bolivians at risk.

His departure added to a sense of crisis in Latin America, which has been hit by weeks of unrest in countries such as Ecuador and Chile, where protesters are urging governments to step back from policies raising fuel and transport prices.