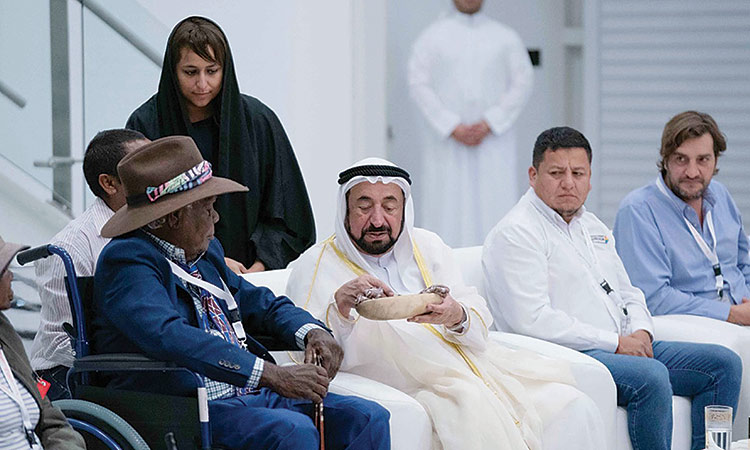 Sheikh Sultan said it was vital to maintain the customs and traditions of indigenous peoples.

During a speech delivered at the event, he affirmed that “Sharjah’s desert” has worked hard to protect future generations, preserve their customs and traditions, and protect them from extinction.

He pointed out that it is incumbent to work together with the indigenous peoples of other deserts to upgrade and maintain their customs and traditions.

The Ruler of Sharjah said that the Sharjah desert works to protect future generations from extinction in societies and highlighted the threats faced by many other deserts.

He concluded by praising the efforts of Sheikha Hoor Al Qasimi, Chairperson of the Board of Directors of the Sharjah Architecture Triennial, and her team.

Dr Sheikh Sultan listened to a detailed explanation of the artwork (Ngurrara 2) that constitutes a map of the memory of a place where their ancestors lived for more than 60,000 years

The audience presented several commemorative gifts inspired by their desert environments to the Ruler of Sharjah in appreciation of his great role in serving humanity in all fields.

The meeting was attended by Al Qasimi and Sheikha Nawar Al Qasimi, Director of the Sharjah Art Foundation.

An earlier report said Sheikh Sultan opened the inaugural edition of the Sharjah Architecture Triennial, held under the theme “Rights of Future Generations”.

The event aims to enrich dialogues and discussions on the building environment in the region by revisiting the existing discourse from a regional perspective. The Triennial opens up new spaces for critical reflection and supports research into the relationship of the urban environment with its complex social, economic and cultural contexts.

The Sharjah Architecture Triennial, in its inaugural edition, highlights the issue of the rights of future generations through the participation of a group of architects, artists, anthropologists, researchers, performing artists, academics and policy makers.

This edition of the Triennial is an invitation to rethink the forms of architecture and its role in light of the current climate crisis owing to relations between generations are at the heart of the conflict caused by this crisis, and architects have a responsibility to secure and protect the rights of future generations.

The launch ceremony began with a visit by His Highness the Ruler of Sharjah to the Khalid Bin Mohammed School building where he reviewed several projects implemented by students of the College of Architecture, Art and Design at the American University of Sharjah where His Highness was briefed about these projects and their cultural and architectural indications.

Sheikh Sultan was briefed on the stand dedicated to Bee’ah’s headquarters and a selection of projects by the late architect Zaha Hadid, which were implemented in different countries of the world and became a milestone for those countries due to their magnificent and green design.

His Highness watched a documentary on the construction stages of Bee’ah’s new headquarters, one of the smartest and most sustainable administrative buildings in the world, which demonstrates the company’s commitment to protecting the environment and using 100% renewable energy from waste, with a dynamic design that gathers the latest environmental solutions.