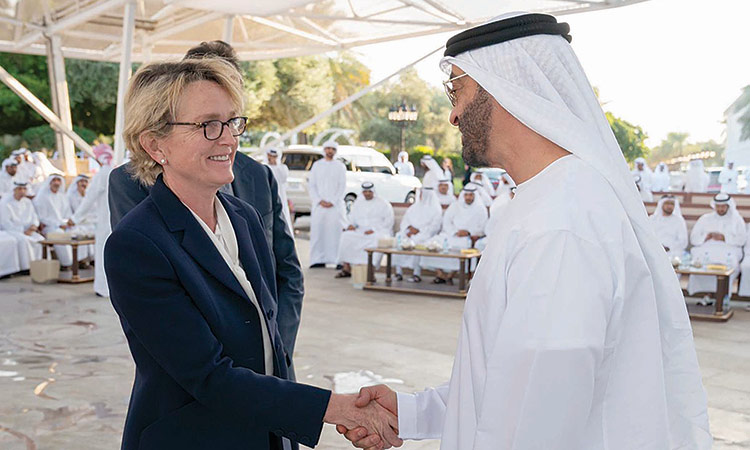 The delegation was accompanied by Mohammed Khalifa Al Mubarak, Chairman of the Abu Dhabi Department of Culture and Tourism (DCT) Abu Dhabi.

Sheikh Mohamed welcomed the members of the delegation, who are participating in several cultural initiatives and dialogues that characterise the two countries while highlighting the importance of social communication between their peoples to strengthening their friendship and cooperation.

Flanerie Colbert Abu Dhabi will organise a programme of public skills workshops and dialogues from Nov.12-28, 2019, at the Artisans House, as well as open activities throughout the Galleria on Al Maryah Island showcasing the creativity of a range of French luxury brands from Nov.12 to Dec.14.

On Nov.20-23, the Abu Dhabi Art Exhibition will feature discussions on luxury and modern French art, with the participation of speakers from leading French cultural and luxury institutions.

84 French luxury houses and 16 cultural institutions will be featured during the Flanerie Colbert Abu Dhabi: ‘’French Luxury in the 21st Century.’’ Flanerie Colbert will bring together artisan skills, contemporary creation and the very best of both Emirati and French cultures.

Activations at Louvre Abu Dhabi, the House of Artisans, The Galleria Al Maryah Island and at Abu Dhabi Art with the support of the Department of Culture and Tourism will promote cross-cultural dialogue between France and the UAE.

At Louvre Abu Dhabi, 10,000 Years of Luxury will, for the first time in the region, explore the history of luxury.

The House of Artisans programme will feature French and Emirati artisans engaging in a conversation about their respective crafts - including Al Sadu, Bisht, Calligraphy, Gahwa, Khoos, Talli or Khanjar-making on the Emirati side and, on the French side, embroidery, gastronomy, silver-smithing and leather goods

Sheikh Mohamed also received Claude Chirac, the daughter of late French President Jacques Chirac, who is visiting the country to attend the naming of an Abu Dhabi street after her father.

During the meeting, Sheikh Mohamed highlighted the key role jointly played by Jacques Chirac and the late Sheikh Zayed Bin Sultan Al Nahyan in strengthening the overall relations between the UAE and France, as well as President Chirac’s positive support for just Arab causes, which earned him a special place in the history of UAE relations and Arab-French relations in general.

He also recalled his numerous meetings with President Chirac and the distinguished ties between the UAE and France during his presidency, which established the foundations of the prosperous relationship between the two countries.

Claude Chirac expressed her gratitude to the UAE and Sheikh Mohamed for naming a street in Abu Dhabi after her father.

The two leaders laid a special focus on the cooperation ties between the UAE and Kurdistan Region, particularly in economic, investment, developmental and humanitarian affairs, and exchanged views over a number of regional issues.

They spelled out their determination to grow cooperation across all fronts, with a particular emphasis on trade and investment, with Sheikh Mohamed underlining the UAE’s keenness on fostering the fraternal ties with the Republic of Iraq.

Barzani hailed the evolving relations between the two sides and hailed the support provided by the UAE to help the Kurdistan Region survive the challenges associated with hosting the displaced and refugees scattered across a number of the region’s areas.