‘Nothing short of CBI probe into rape-murders of children’ - GulfToday

‘Nothing short of CBI probe into rape-murders of children’ 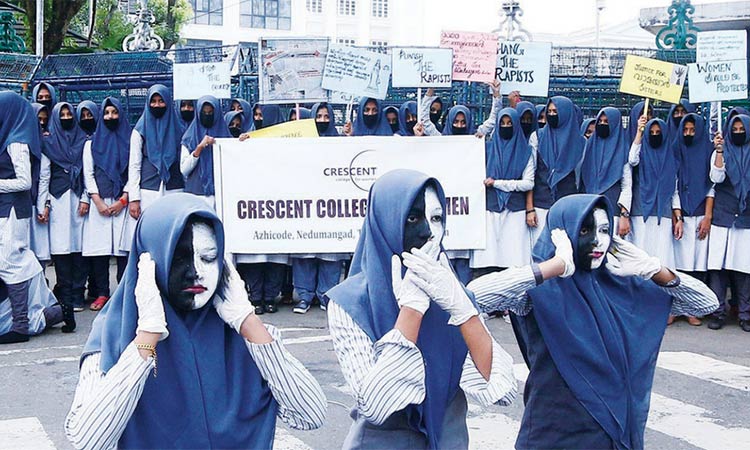 Students hold a demonstration in Trivandrum against the acquittal of suspects in the rape and murder of two minor siblings.

It demanded a fresh probe by the elite Central Bureau of Investigation (CBI) as the suspects belonged to the ruling Communist Party of India (Marxist) or CPM.

“Nothing short of CBI investigation is acceptable to us since their parents say the ‘Sickle Party’ men are the killers,” said opposition leader Ramesh Chennithala, inaugurating a sit-in by the Women’s Congress.

“Everybody knows that the police destroyed or ignored evidence to save the ruling party. Even the chairman of the Child Welfare Committee (CWC) appeared in court for them.” This is the second consecutive week the border village of Walayar in Palakkad turning into the venue of demonstrations by the opposition as various groups came out in protest against the suspected killers going scot-free.

On Tuesday, Mullappally Ramachandran, the Congress party president in the state, staged a 12-hour fast while the UDF observed a district-wide shutdown. Kerala Students Union held a long march from Walayar to Palakkad town on Thursday.

“Not only me but (CPM veteran and former chief minister) VS Achuthanandan who is the local legislator had visited their home after the second death and warned that the police investigation was heading in the wrong direction,” he said.

The autopsy and scientific examinations found both the girls, aged 13 and nine, were subjected to unnatural sex repeatedly. The elder one died on January 13, 2017, and the younger 52 days later.

But the police ignored them and did not send their samples for lab tests to identify the rapists allegedly under pressure from the local leaders.

Last month a court acquitted four of the five suspects triggering widespread outrage while the last one, a minor, is awaiting a decision of a separate forum under Juvenile Justice Act.

During the investigation, a young man, Praveen, whom the police had summoned as a suspect in the case had committed suicide.

Initially, the police wrote it off as a suicide. After widespread protests two years back, the state government constituted a special investigation team headed by a senior officer who publicly said the children engaged in consensual sex.

They allegedly conspired with prosecutors to prevent witnesses from deposition while the government appointed a lawyer appearing for the suspects, who also belonged to the CPM, as the chairman of the CWC meant to protect children in distress.

The illiterate mother of the children says the police and the prosecution lawyers kept them in the dark on the details of investigation and autopsy reports. Last week the parents met chief minister Pinarayi Vijayan seeking a CBI probe.

Last week, the head of the orphanage where their seven-year-old brother was sheltered revealed that unidentified men had tried to finish the child off multiple times.

The National Commission for Scheduled Castes (NCSC) has also intervened asking the state’s chief secretary and police chief to appear before it on Monday in New Delhi for a hearing.

The commission wanted to know about the lapses and reasons for the acquittal and measures to be taken for their conviction in a higher court.

Chennithala said the government had filled the district-level CWCs with party men instead of lawyers well-versed in juvenile justice and child psychologists which had led to the conviction rate in child abuse cases to fall to 16.7 per cent.

“The police and the CWC authorities thought people are fools to believe whatever they say. They destroyed evidence or ignored them to save the suspects instead of bringing them to book,” he said.

“Can anybody believe these small children would hang from a roof eight feet high? Whom are you fooling? If you had acted when the elder one died, the other child would have escaped.” Chennithala, who is also the chairman of the UDF, visited the home of the children after the meeting.