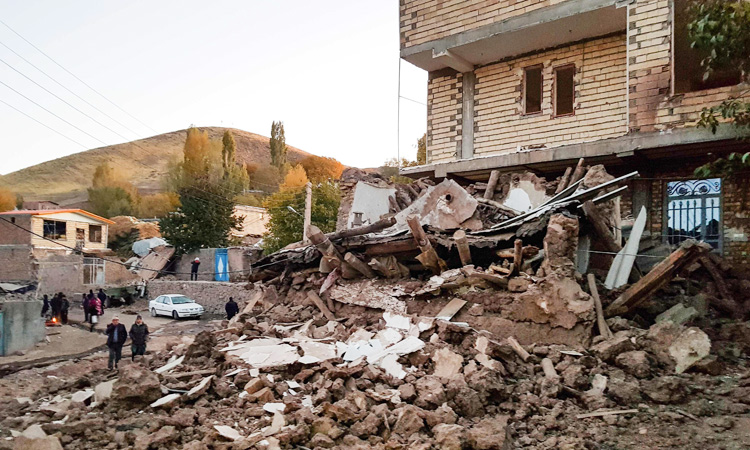 A picture shows the debris of buildings in the Iranian village of Varnakesh in East Azerbaijan Province, following a quake. AFP

A strong earthquake of magnitude 5.8 struck northwestern Iran on Friday, killing at least six people and injuring more than 300, according to Iranian state media.

The US Geological Survey said the magnitude 5.8 quake struck at 2:17am (2247 GMT) 83 km (52 miles) southwest of Ardabil in East Azerbaijan province.

State news agency IRNA said the quake was followed by more than 60 aftershocks, causing panic among residents who rushed out of their houses in the middle of the night.

“Rescue teams and helicopters have been dispatched to the quake-hit areas and hospitals are on full alert to help injured people. Unfortunately six people were killed and 345 were injured,” Iran's emergency medical services chief Pirhossein Kolivand told state TV.

The quake was felt in several towns and cities in Iran. The European-Mediterranean Seismological Centre (EMSC) said the quake was felt by some 20 million people. The quake had a shallow depth of 10 km (6.2 miles), which would have amplified the shaking.

“The quake hit the Tark county in the province at 02:17am (22:47 GMT)...many of people were injured while trying to flee their houses in panic,” a local official told TV, adding that some 400 houses were damaged.

Criss-crossed by several major fault lines, Iran is one of the most earthquake-prone countries in the world. In 2003, a magnitude 6.6 quake in Kerman province killed 31,000 people and flattened the ancient city of Bam.

In 2017, a magnitude 7 earthquake struck that struck western Iran and killed more than 600 people and injured more than 9,000.

The quake, which had a depth of 10 kilometres, struck 17 kilometres south-southeast of Borazjan city at 6:49 am (0319 GMT), the US Geological Survey said on its website. State news agency IRNA said the earthquake was felt in Bushehr, site of the country's sole nuclear power plant.