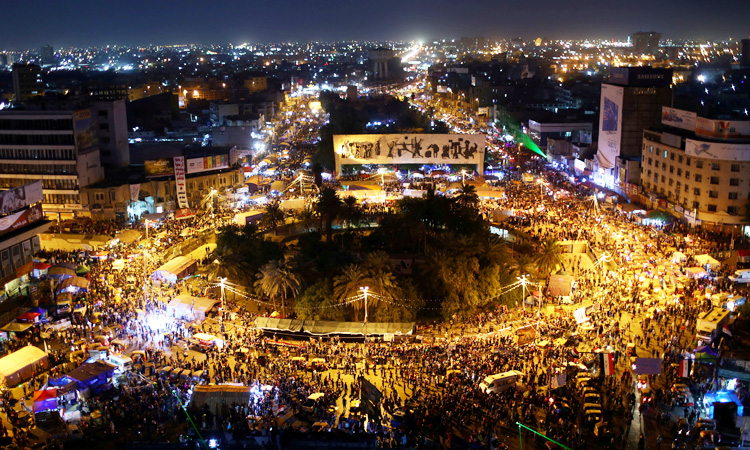 A general view of Tahrir square as demonstrators take part during the ongoing anti-govt protests in Baghdad on Tuesday. Ahmed Jadallah/ Reuters

Two more Iraqi protesters have been killed in renewed clashes in the Shiite holy city of Karbala, a flashpoint in weeks of anti-government demonstrations, a protester and a medic said Wednesday.

They said the two were killed in overnight clashes near the provincial headquarters in the city. They spoke on condition of anonymity for fear of repercussions.

The protesters have focused their anger on Shiite political parties and militias, many of which have close ties to Iran . Across the south, they have attacked party and militia headquarters, setting some of them ablaze.

In Karbala, protesters attacked the Iranian Consulate earlier this week, hurling firebombs over its walls. Security forces killed at least three people and wounded several others as they dispersed the protest. Days earlier, masked men suspected of links to the security forces opened fire on a demonstration in Karbala, killing at least 18 people.

Iraqi security forces opened fire on Wednesday to disperse protesters gathered on a bridge in central Baghdad, shooting live bullets in the air, a witness said. There appeared to be no casualties.

Protesters had blocked the Shuhada bridge since Tuesday afternoon as part of efforts to bring the country to a standstill, with thousands continuing to partake in anti-government demonstrations in the capital and southern provinces 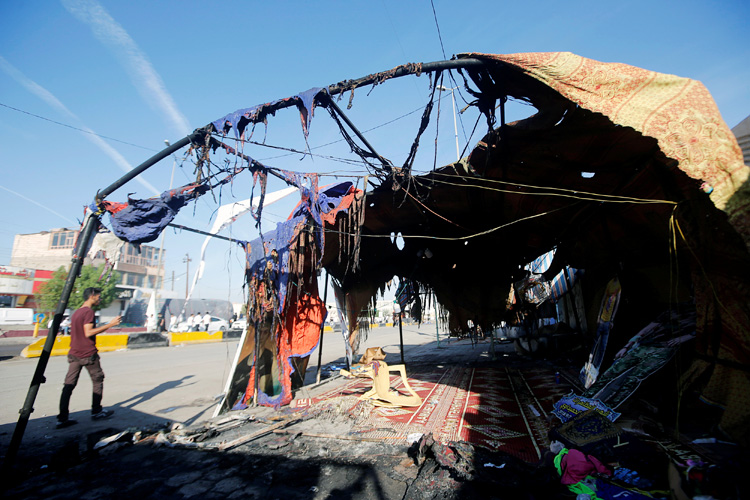 A demonstrator walks past a tent, which was burned last night during the ongoing anti-govt protests in Basra, Iraq.

Security forces shot dead at least 13 protesters in the 24 hours to late on Tuesday, dispensing with weeks of relative restraint in favour of trying to stamp out dissent.

In the southern oil-rich province of Basra, security forces forcibly dispersed a sit-in overnight but there were no deaths reported, security sources said. Protesters had camped out in front the provincial government building. 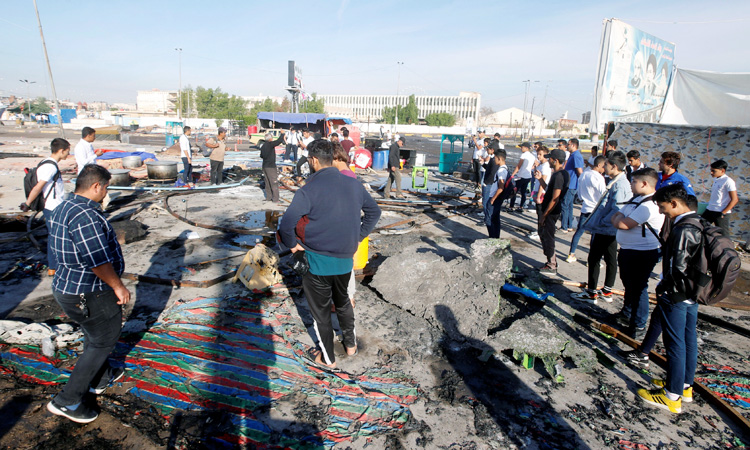 Demonstrators are seen at the place where tents were burned last night during the ongoing anti-government protests in Basra, Iraq.

The US embassy in Baghdad on Wednesday condemned the deadly violence against unarmed demonstrators, and urged Iraq's leaders to engage urgently with the thousands who have been protesting.

“We deplore the killing and kidnapping (of) unarmed protesters, threats to freedom of expression, and the cycle of violence taking place. Iraqis must be free to make their own choices about the future of the nation,” it said in a statement.