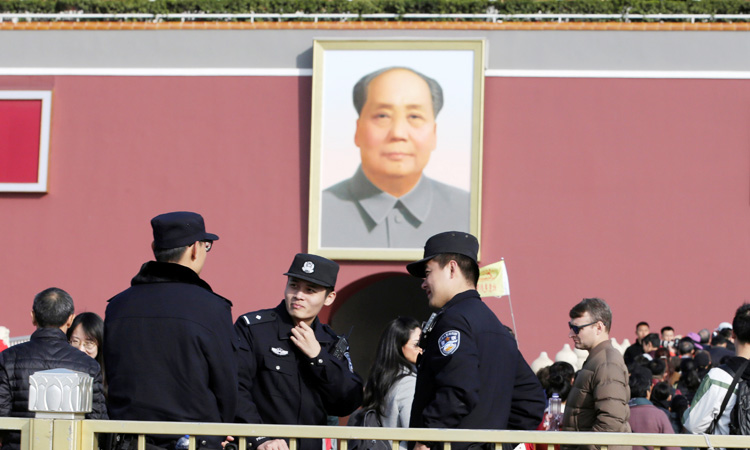 Policemen are seen in front of Tiananmen Gate in Beijing, China on Friday. Jason Lee/Reuters

China won’t tolerate challenges to the bottom line of the “one country, two systems” formula that governs Hong Kong, separatism or threats to national security there, a senior Chinese official said on Friday after a meeting of the top leadership.

The past five-months of anti-government protests in the former British colony represents the biggest popular challenge to President Xi Jinping’s government since he took over the leadership in late 2012.

On Thursday, the party vowed to ensure Hong Kong’s stability, following a closed-door, four-day meeting of the ruling Communist Party’s senior leaders in Beijing, signalling its importance to the stability-obsessed party.

What started as opposition to a now-withdrawn extradition bill has grown into a pro-democracy movement against what is seen as Beijing’s tightening grip on the Asian financial hub, which protesters say undermines a “one country, two systems” formula promised when Hong Kong was handed back to China in 1997, guaranteeing freedoms not found in mainland China.

Speaking to reporters on the outcomes of that plenum, parliament official Shen Chunyao said Hong Kong was “of course” an important topic at the meeting, which gathers together some 370 officials, from Xi on down.

The plenum stressed that “one country” is the foundation for “two systems”, and the party will support the governments of the Special Administrative Regions - which also include Macau - to strengthen their law enforcement efforts, said Shen, head of the Basic Law Committee of the parliament’s standing committee.

The Basic Law is Hong Kong’s mini-constitution which governs its relations with Beijing.

“In short, we will further improve the central government’s system of exercising full administrative power over the Special Administrative Regions in accordance with the constitution and the Basic Law,” he said.

The party will “firmly safeguard national sovereignty, security, and development interests, safeguard the long-term prosperity and stability of Hong Kong and Macau, and will not tolerate any challenges to the bottom line of ‘one country, two systems,’” Shen said.

The party “will not tolerate any act of splitting the country or endangering national security, and resolutely prevent and contain external forces from interfering in Hong Kong and Macau affairs and carrying out separatist, subversive, infiltration or destructive activities.”

China denies meddling in Hong Kong and has accused foreign governments, including the United States and Britain, of stirring up trouble.

China has also quietly more than doubled its deployment of mainland security forces in Hong Kong, according to foreign envoys and security analysts, in a dramatic move by Beijing to prepare for a potential worsening of the unrest.