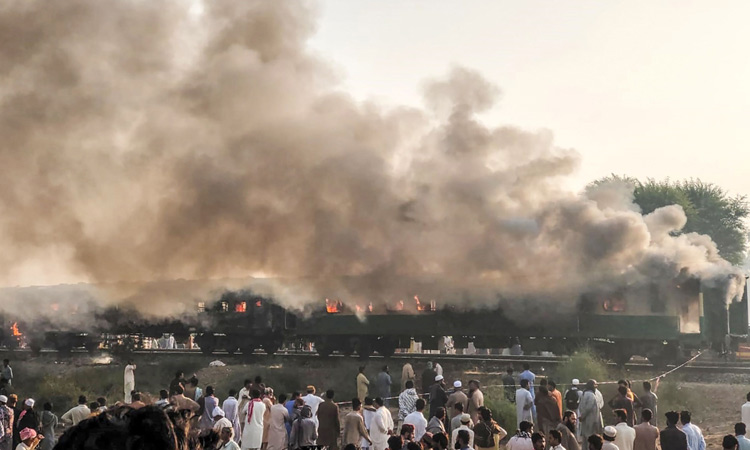 Residents gather beside the burnt-out train carriages after a passenger train caught on fire near Rahim Yar Khan, Pakistan, on Thursday. Reuters

At least 73 people were burnt alive and several others injured when three bogies of a train caught fire near Liaquatpur Rahimyar Khan, Punjab province, Pakistan, on Thursday.

A number of persons among those wounded were stated to be in critical conditions. Women and children are among those dead. 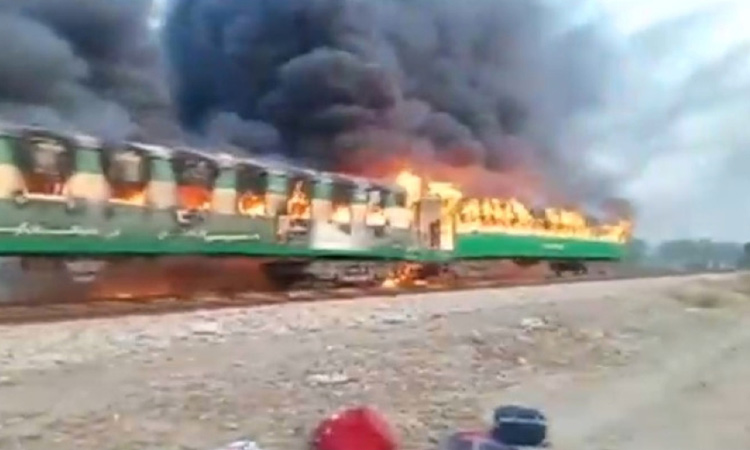 A fire burns a train carriage after a gas canister passengers were using to cook breakfast exploded, near the town of Rahim Yar Khan. Reuters

The dead and injured persons were shifted to the district headquarters hospital in Liaquatpur. Some of the wounded people were rushed to the Bahawal Victoria Hospital in Bahawalpur.

The train was going to Rawalpindi from Karachi. It was the worst disaster on Pakistan’s accident-plagued railway system in nearly 15 years. 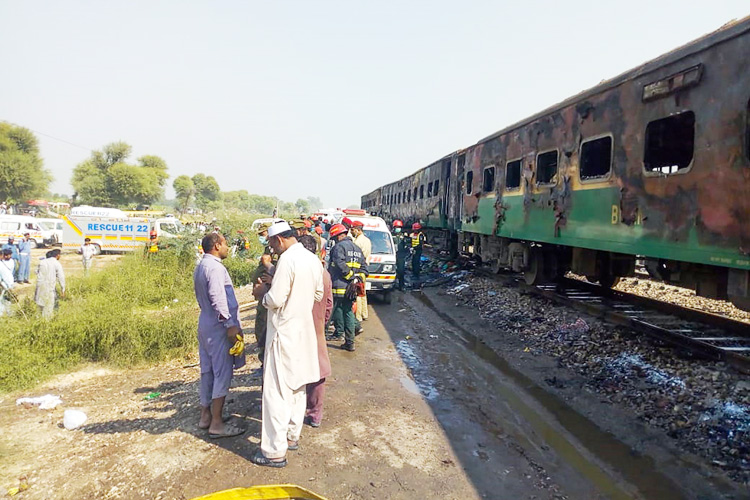 Rescue workers gather beside the burnt-out train carriages after the passenger train caught on fire in Pakistan.

Survivors recounted horrific scenes of fellow passengers screaming as they jumped through the windows and off the train, flames billowing from the carriages. "We could hear people crying and screaming for help," said Chaudhry Shujaat who had boarded the train just a few hours earlier with his wife and two children. "I thought we would die. The next car was on fire. We felt so helpless."

The fire was caused by a cylinder blast that occurred in the morning when passengers were preparing their breakfast, Railways Minister Sheikh Rashid said and added that they belonged to the “Tableeghi Jamaat” (religious preachers’ party), who were going to Raiwand near Lahore. Many people saved their lives by jumping off the train, the minister said. However, a number of eyewitnesses disputed the minister’s claim. 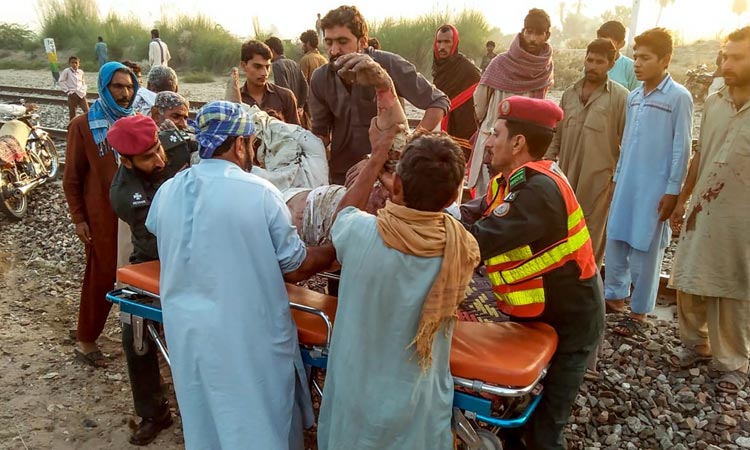 Rescue workers move an injured victim at the site after a passenger train caught on fire near Rahim Yar Khan. Reuters

People sneaking stoves onto trains to prepare meals on long journeys is a common problem, the minister said. But several survivors questioned whether the fire was sparked by a cooking accident, telling media they believed the cause was a short-circuit in the train’s electrical system.

Survivors said it took the train nearly 20 minutes to come to a halt after the fire broke out and passengers began screaming for help. Some pulled at emergency cords that weave through the train to notify the conductor.

Ghulam Abbas, a passenger who had gotten on the train in the town of Nawabshah in neighboring Sindh province with his wife and two children, recounted watching panicked passengers jumping off.

"We learned afterward that most of them had died," he said. His wife, Sulai Khan Bibi, said she was horrified what would happen to their two small children. "We were so close to death, but Allah saved us," she said, clutching the children. 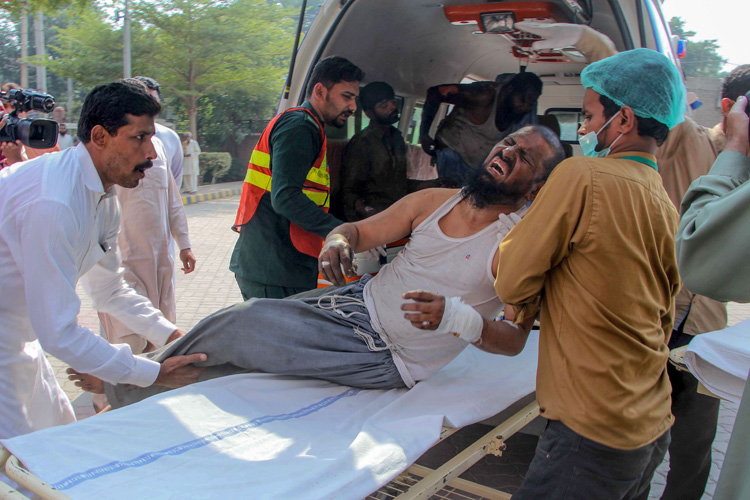 Paramedics shift an injured victim to a hospital in Multan on Thursday after a passenger train caught on fire.

Television pictures showed fire and black smoke pouring from the train’s windows after it came to a stop on a stretch of line flanked by fields.

In Pakistan, poor passengers often bring their own small gas stoves on the trains to cook their meals, despite rules to the contrary, according to Railways Minister Sheikh Rashid Ahmed. Safety regulations are often ignored in the overcrowded trains.

Ahmed said in Thursday's tragedy, it was cooking oil carried on the train by a group of Islamic missionaries known as Tableeqi-e-Jamaat that had caught fire after the initial cooking stove exploded, contributing to the extent of the blaze and its speedy progress. 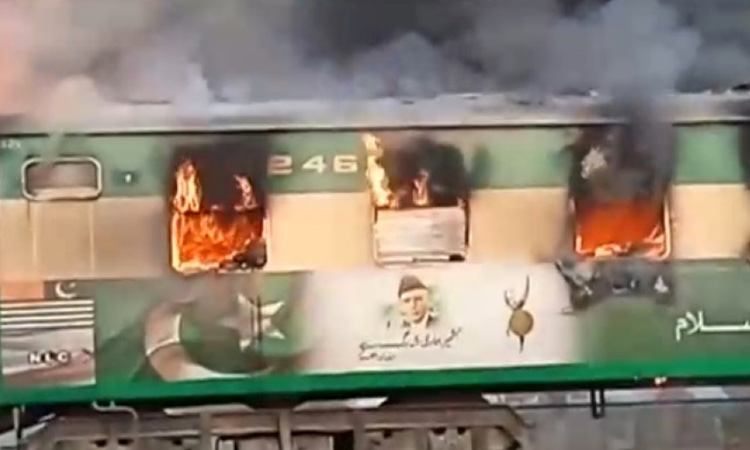 A fire burns a train carriage after a gas canister passengers were using to cook breakfast exploded, near the town of Rahim Yar Khan. Reuters

Railway official Shabir Ahmed said bodies of passengers were scattered over a 2 kilometres-wide area around the site.

People from nearby villages rushed to the train, carrying buckets of water and shovels to help douse the flames. "But it was impossible," said Ahmed.

Through the morning hours, rescue workers and inspectors sifted through the charred wreckage, looking for survivors and aiding the injured. Local TV footage from the scene showed a huge blaze raging as firefighters struggled to get it under control. 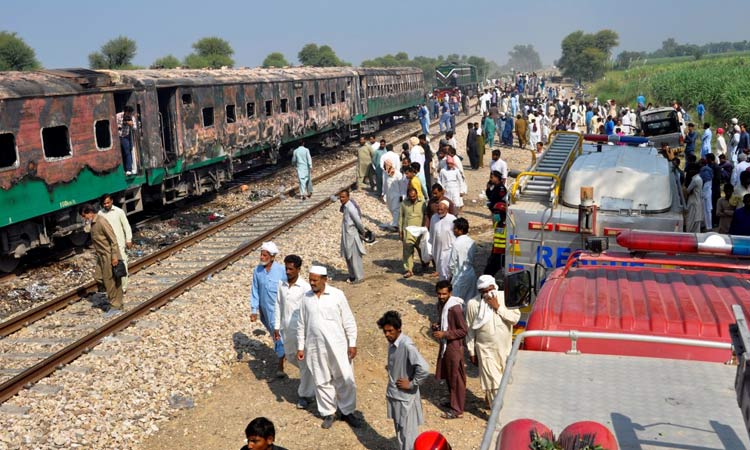 People gather beside the burnt-out train carriages after a passenger train caught on fire near Rahim Yar Khan. AFP

Nabila Aslam, a Railways official, said the passengers must have "hidden the gas cylinder in their clothes" while boarding the train, as carrying one was strictly against the rules.

Rescue 1122 teams have extinguished the fire and are now carrying out a cooling and search operation under the supervision of Ahmed. Army troops including doctors and paramedics were also dispatched to assist rescue teams in the operation, a statement by the Inter-Services Public Relations said.

It said an army helicopter was also dispatched from Multan in order to rescue the injured.

Doctors said identification of the deceased would be carried out through DNA testing. Officials said the fire engulfed two economy class bogies and most of the passengers got up from Hyderabad.

A Pakistan Railways official said the train schedule will not be affected by the sad incident.

Prime Minister Imran Khan said he was "deeply saddened by the terrible tragedy of the Tezgam train". "My condolences go to the victims' families and prayers for the speedy recovery of the injured. I have ordered an immediate inquiry to be completed on an urgent basis," he said via Twitter.

Human Rights Minister Shireen Mazari extended "prayers and condolences" to families of the victims of the "terrible Tezgam train tragedy". She said in a tweet that tragedy could have been avoided but ever since she can recall while travelling by train no baggage check or restrictions enforced.

This is the third major train accident that has taken place in the country over the past five months. In July, a train collision in Sadiqabad between passenger train Akbar Express and a freight train had killed more than 20 and injured more than 80 people.

In June, three people were killed when a passenger train, the Jinnah Express, hit a freight car near Hyderabad. At the time, Rashid had accepted responsibility and sought an apology from the nation. 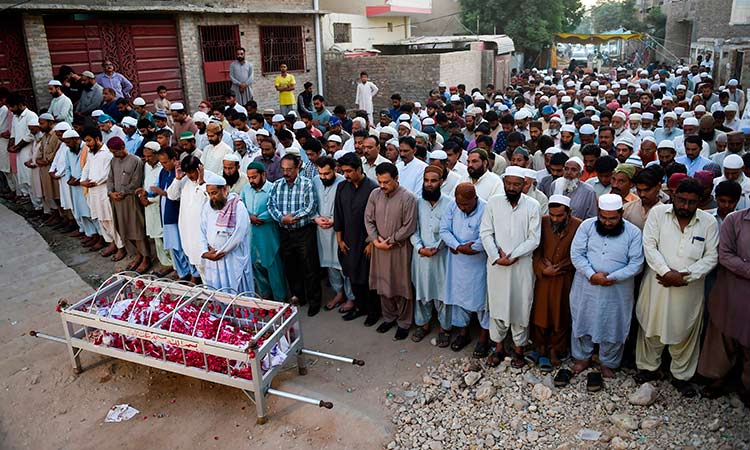 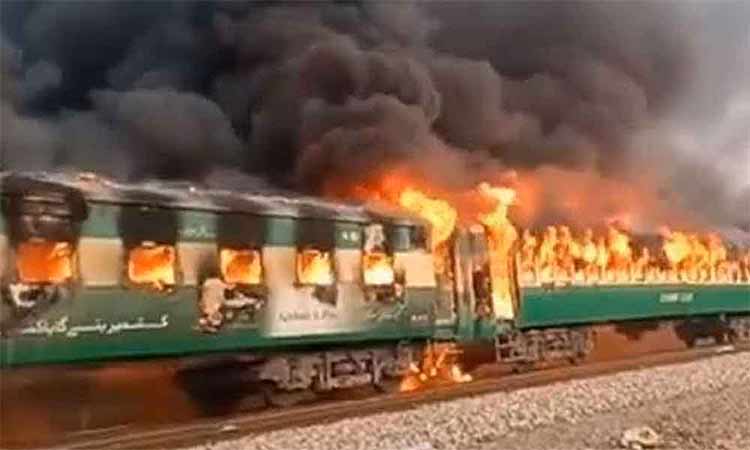 It was an unfortunate and painful incident in which more than 70 people were burnt alive and several others injured when three bogies of a train caught fire near Liaquatpur Rahimyar Khan,