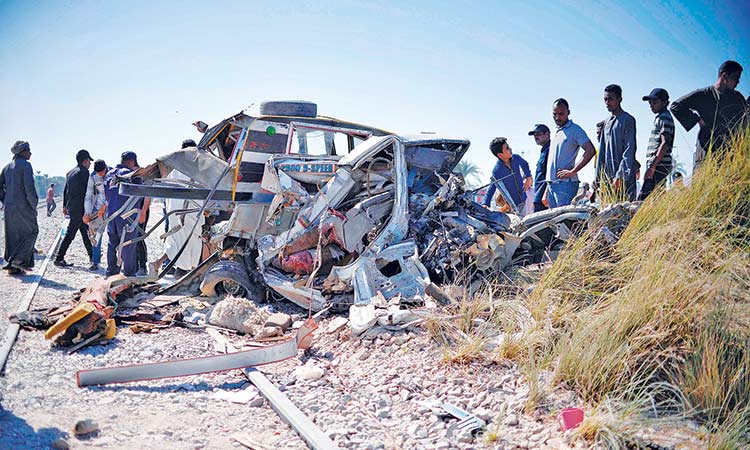 Egyptians gather around the wreckage of a pickup truck after its collision with a train in Al Karnak village in Egypt on Tuesday. Agence France-Presse

The incident, which took place on Monday in the Nile Delta town of Tanta, has stirred public outrage. Footage of an ensuing argument between the conductor and other passengers on the train went viral, along with calls on social media for the resignation of Egypt’s Transportation Minister Kamel el-Wazir. The other youth who was forced to jump off the train was injured.

Railway authorities said the conductor demanded the youths “pay tickets but they refused,” after which he opened a carriage door for them to jump. Prosecutor Mohammed el-Feki on Tuesday ordered the conductor to remain in custody for four days pending an investigation.

Just hours later, at least four people were killed in a separate train accident on Tuesday morning when a vehicle crashed into a train in the southern tourist city of Luxor, authorities said. Four others were injured.

Egypt’s railway system has a history of badly maintained equipment and poor management.

In February, at least 25 people were killed in a massive explosion when an unmanned locomotive slammed into a barrier inside Cairo’s bustling central train station. That accident led to the resignation of Transportation Minister Hisham Arafar and the appointment of el-Waizir, a career army officer.

The country’s deadliest train crash occurred in 2002, when over 300 people died after a fire erupted on a speeding train travelling from Cairo to southern Egypt. The latest official figures show that 1,793 train accidents took place across the country in 2017.

Police raided a hideout in a deserted farm house in El-Arish, provincial capital of North Sinai, triggering a shootout, the ministry said in a statement.

Weapons including explosive devices, rifles and guns were found, it said, without giving the date of the operation. Egypt has for years been fighting an insurgency in North Sinai.

The military has launched a nationwide offensive since February 2018 against militants focusing on North Sinai where a local affiliate of the Daesh group is based.