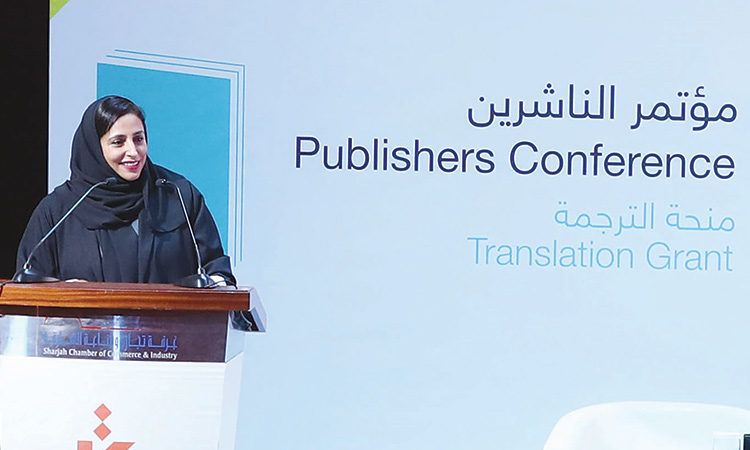 Sheikha Bodour speaks at the Publishers Conference in Sharjah.

Sheikha Bodour Al Qasimi, Vice-President of International Publishers Association (IPA), has reiterated the importance of tapping into the immense growth potential of emerging markets, saying that Africa, the Middle East and Asia, are the places to watch.

Speaking at the concluding session of the three-day Publishers Conference, organised by Sharjah Book Authority in the lead up to the 38th Sharjah International Book Fair, the IPA Vice-President said that around 90 per cent of the global population under 30 are in emerging markets, with Africa and the Middle East having the highest proportion.

“Emerging and developing markets also account for almost 60 per cent of global GDP. These are the book buyers of the future and it is our duty as publishers to provide them with the material they need so that they can lead successful, fulfilled lives,” she said.

Sheikha Bodour added, “I believe that Africa, the Middle East and Asia, are the places to watch. They have the growth potential. They are attracting more attention on the global stage as publishing and pop culture become more globalised.”

The last day of the Publishers Conference was focused on bringing to light a new wave of efforts unlocking the potential of African publishing markets. Speaking about the issue, she said, “I do believe that the future is bright for African publishing and I am delighted by what we have achieved after only two seminars.  Each African Conference is like a seed planted.  Roots are put down, the branches spread, connections are made between delegates and something starts to flourish.”

Sheikha Bodour added that owning to the wide scope and large attendance at their events, these will no longer be seminars, but conferences. “So our next focus on Africa will be the Morocco Conference and we hope to see many of you there,” she concluded.

Earlier, welcoming the publishers, IPA President Hugo Setzer said that the event reminded him of the importance of IPA partnership with authors and publishers and the need to work together to overcome the challenges posed in the areas of copyrights and freedom to publish.

He thanked Dubai Cares for supporting IPA’s efforts to bring about, “a real change in Africa”.

He said this in context of the establishment of the $800,000 African Publishing Innovation Challenge Fund whose first seven winners were announced and awarded at the conference. They are sharing $170,000 of the fund, which they will use to launch a variety of publishing-related projects starting January 2020 aimed at improving literacy and access to books in countries across Africa.

“Africa is one of the youngest continents in the world and IPA seeks to serve as a catalyst for the African publishing market to find their own new solutions to old challenges. The SIBF Publishers Conference is crucial because we need to build strong bridges to bring publishers together; they play a key role in promoting literacy, reading and community development. There is no future for humanity without reading,” added Setzer.

Speaking on the occasion, Dubai Cares CEO Dr Tariq Al Gurg thanked Sheikha Bodour Al Qasimi for her tireless efforts to promote literacy, reading, and publishing, saying the Dubai Cares and IPA’s partnership to support the African publishing sector was born out of their shared understanding that significant strides need to be made to promote literacy and capacity building in Africa through the preservation and the promotion of indigenous languages.

“Education will remain the core focus of Dubai Cares, with literacy at its heart,” he said.

The fact that the African publishing industry contributes over $1 billion to the economy annually, and shows a cumulative annual growth of six per cent, he said, reflected the enormous potential of the publishing industry whose “transformative impact on education, reading and sociocultural development must be maximised.”