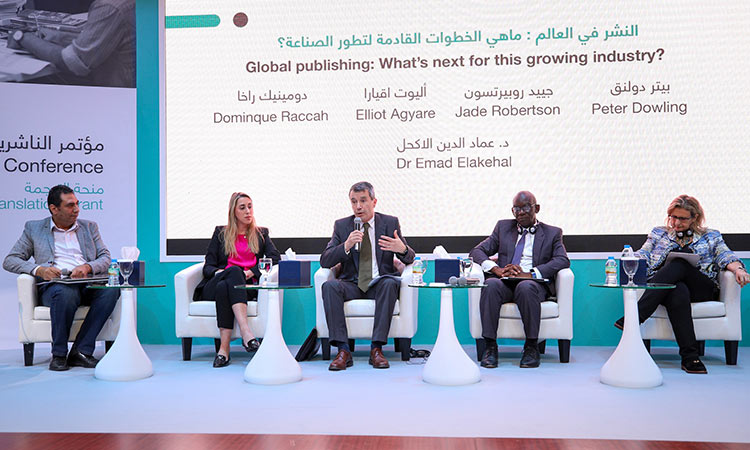 Panelists hold talks during the first day of the 9th Publishers Conference in Sharjah.

Initiatives such as the Publishers Conference organised by Sharjah Book Authority (SBA), in the lead-up to the 38th Sharjah International Book Fair (SIBF), were key to a healthy publishing industry, opined international publishers participating in the annual conference that opened in Sharjah on Sunday.

Dominque Raccah, Founder and CEO of Sourcebooks (USA), said that the global publishing industry today is better and healthier than ever before.

“We expected digitalisation to take over the printed books industry, but the opposite has happened. The reason is that books perform a different role. We have seen that 25 per cent of books sold are given as gifts. Children’s books keep growing year on year. Around 80 per cent of the sales are of physical books. I could not have predicted this a decade back. Communities have played an extraordinary role in this renaissance. Publishers should seek out innovative ways of reaching out to their audience.”

Earlier, welcoming the international publishers at the  Conference SBA Chairman Ahmed bin Rakkad Al Ameri said that the event’s main objective was to look at publishing in the most comprehensive manner, and from various perspectives, including that of the publisher, the reader, the author and the distributor.

He said, “We in Sharjah are working on different levels to promote the publishing industry based on the feedback we have received over the years. Our success can be gauged by the fact that we have received 2,900 applications for the SIBF Translation Grant last year. We have also successfully translated 1,200 books in the past few years. Last year, 3,000 matchmaking meetings were held with the participation of more than 400 publishing experts from all over the world.”

He added, “We are gathered here to engage in a dialogue about the future of the publishing industry and study strategies to promote the global book industry. We are working on expanding the horizons of the publishers, which will open out more markets for them, taking into account new technology.”

Elliot Agyare, President, Ghana Book Publishers Association, and CEO, Smartline Publishing (Ghana), spoke about the impact of digitalisation and globalisation that was affecting the African publishing industry, partly because they had not yet learnt to monetise the huge mobile telephone penetration that the African continent is witnessing.

The power of social media and digital platforms to advertise and promote books was undeniable and publishers could ignore them only at their peril, said Jade Robertson, International Publishing Director, Austin Macauley Publishers (UK).

Peter Dowling, Publisher Oratia Books (New Zealand), spoke about the explosion in bilingual and multicultural publishing in New Zealand. “While small and medium publishers are doing relatively well, globalisation has affected us acutely. However, educational publishing is doing well, digitally as well as in print. Children’s books too are growing all the time. Copyright laws are critical, and our government is in the process of framing them,” he said.

Panellists participating in the second session, centred on guidelines for publishers from other regions in dealing with Arab publishers and shed light on the SIBF Translation Grant, agreed that the only way to avoid conflict between cultures was through literature, and the bridge for that was through translation.

Faisal Al Nabouda, General Coordinator of Publishers Conference, outlined the features of the SIBF Translation Grant and how to participate.

The conference features an expanded, three-day schedule this year and focuses on the latest publishing trends, emerging markets, digital strategies, threats and challenges.

The 38th edition of the Sharjah International Book Fair (SIBF 2019) will be a dream come true for book lovers, with more than 60 international authors and cultural personalities set to participate in the third largest book fair in the world.