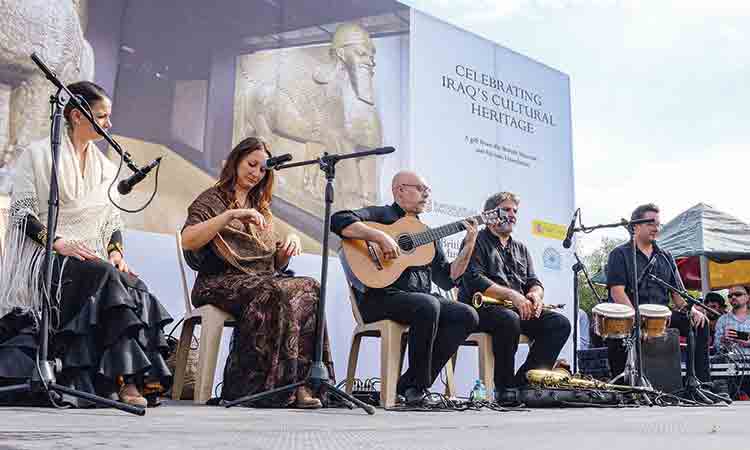 Members of a Spanish flamenco music group perform during a ceremony for the unveiling of replicas of ‘lamassu’ at the University of Mosul in Iraq on Thursday. Agence France-Presse

Two high-tech replicas of iconic Assyrian statues destroyed by the Daesh group in northern Iraq were unveiled on Thursday at the University of Mosul.

The real “lamassu” — massive statues of winged bulls with human faces — had adorned a royal throne room in the ancient city of Nimrud for centuries, and one was later exhibited in the Mosul Museum.

But militants destroyed the originals after they swept across northern Iraq in 2014, blowing up Nimrud and filming themselves taking hammers to pre-Islamic artefacts they deemed heretical.

Iraqi troops recaptured Mosul in mid-2017, but the museum has remained shuttered and the lamassu in ruins.

Using 3D recordings of lamassu fragments, the Spanish Factum Foundation created copies, erected this week outside the student library at the University of Mosul.

“This gift is a message of hope that Mosul has returned to normal and its people must build their city,” Spanish Ambassador Juan Jose Escobar said at the statues’ unveiling.

Ahmad Qassem, a professor of history at the University of Mosul, said the lamassu’s hybrid figure is highly symbolic.

“The head symbolises wisdom, the wings speed, and the body — a mix of a bull and a lion — represent strength,” he told AFP.

And Factum founder Adam Lowe told AFP the replicas now had their own meaning.

“We want them to be here as a symbol, a demonstration of what’s possible with technology when people work together to share cultural heritage, share understanding, and share our historical culture that links us all together,” he said.

“Now they’re sitting in front of the entrance to the student building and I hope they’ll guard everyone for many years to come,” said Lowe.

University student Ilaf Muhannad said she was elated to see her university house them.

“I’m so happy today to see the lamassu statues placed here, because it represents the civilisation and heritage of Mosul. We demand the Iraqi government work on returning everything stolen from Mosul,” she said.

Separately, scarred by a week of demonstrations, curfews and street closures, Iraqis flocked to supermarkets and petrol stations on Thursday to prepare for the following day’s anticipated protests.

A wave of anti-government demonstrations swept Iraq earlier this month, with thousands taking to the streets against rampant corruption, mass unemployment and failing services.

Demonstrations often devolved into violence, with the government saying more than 150 people were killed between Oct.1 and 6.

But activists have called for renewed protests this Friday, prompting many to stockpile food, petrol and other supplies.

“People prefer to prepare some supplies in advance in order to be ready for whatever comes,” said Abu Hamid, a retired army officer.

The 61-year-old was buying fruits and vegetables in Karrada, a commercial district in central Baghdad.

“We’re afraid the roads will be closed, the internet and other communications will be cut, so we’re mobilising,” said Abu Hamid, who sported an imposing dark moustache.

Protests are expected to resume on Friday, both to mark a year since Prime Minister Adel Abdel Mahdi took power and the deadline set by Iraq’s highest Shiite authority for the embattled premier to respond to protester demands.

In some neighbourhoods of Baghdad, store shelves were emptied and shopkeepers lowered their curtains for the day, while exchange shops cleared out their registers.

“We even emptied the safes and kept their doors open,” one owner said, speaking under condition of anonymity.

“That way, if the situation deteriorates, looters would see that the safes are empty and won’t destroy everything.” Even those who were thinking ahead were surprised to see they weren’t the only ones.

Taxi driver Rassul headed to a shop on Wednesday to buy cooking gas canisters for his family — and found a long queue ahead of him.