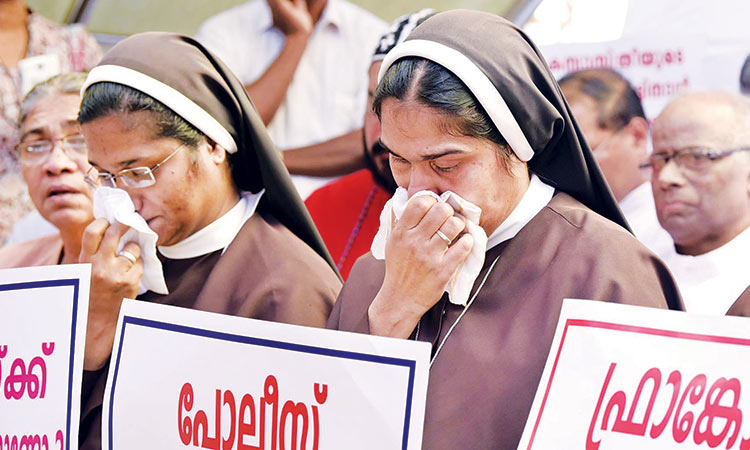 Colleagues of the nun, who has levelled rape charges against Bishop Franco Mulakkal, hold a sit-in in Kochi.

A nun, who had filed a rape case against Catholic Bishop Franco Mulakkal, who is out on bail, approached the national and state Women’s Commissions and the National Human Rights Commission (NHRC), alleging that the priest and his supporters harassed her through various online platforms.

“Attempts to intimidate and defame me and my colleagues through the social media were made by the bishop and his followers. False statements, imputations and fabricated stories tarnishing our reputation and character are being systematically spread through the YouTube channel, Christian Times, run by Bishop Franco and his aides,” the complaint said.

The actual intention of these videos was to insult and harass her, her fellow nuns who are witnesses in the case. The idea was also to exert immense pressure on the investigation officials. Though the Kuravilangad police booked a case against the You Tube channel in May this year, the channel continues to upload more videos, she added. Ever since the FIR was registered, she and her fellow nuns were subjected to character assassination, the nun said in the complaint. The nun stated that such actions are a violation of the bail conditions laid down by the Kerala High Court.

The complaint was filed on Oct.19 according to a spokesman of the Save Our Sisters (SOS), an outfit formed in solidarity with the nun against the bishop. “There is a concerted effort to defame her. All kinds of stories are doing the rounds. They started character assassination after all efforts to cow her down failed,” said the spokesman.

Bishop Mulakkal is a senior member of the Roman Catholic clergy in India. The nun says he raped her 13 times at her Kuravilangad convent between 2014 and 2016.

The nuns have since refused to leave the convent despite repeated orders from the church which had thrown its weight behind the bishop, who denies the charges. His arrest followed a public protest on the street by four nuns led by Sr C Anupama of her congregation, Missionaries of Jesus, in Kochi drawing international media attention.

The Vatican later disrobed another nun, Sr Lucy Kalappura of the Franciscan Clarist Congregation (FCC) for supporting them. She also refused to leave the convent.

Police arrested the bishop on Sept.21 last year on a complaint of the nun who headed the Jalandhar-based congregation under his patronage for almost a decade.

On October 15, Kerala High Court released him on bail as he assured to surrender his passport and make himself available for police questioning whenever required.

The nun says he had raped her on one of his visits to the nunnery in Kuravilangad town of central Kerala and repeated the abuse 12 times over two years.

He’s now back as the bishop of the diocese based in the north Indian state of Punjab and recently asked the four nuns to join different nunneries in remote northern towns. His arrest after a marathon questioning for three days followed a sit-in for days together by the nuns with the support of the action group Save our Sisters (SOS).

Franco is now doing all his administrative and apostolic duties in one of the richest Roman catholic dioceses run by priests and sisters from the southern state.

He also enjoys the support of the Kerala Catholic Bishops Council.

In an apostolic letter in May, which becomes Church law, he made it mandatory for the clergy to report cases of clerical sexual abuse and cover-ups to the Church.

Any sexual advance involving the use of power is considered abusive and no-one will be exempt from scrutiny.

The clerics should also follow state law and meet their obligations to report any abuse to “the competent civil authorities”.