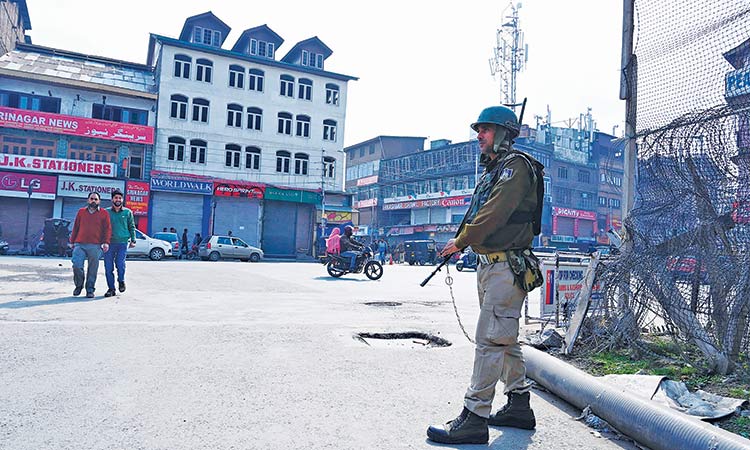 An Indian paramilitary trooper stands guard on a street during a lockdown in Srinagar on Wednesday. Agence France-Presse

The court directed the National Investigation Agency (NIA) to supply the charge sheet to accused and extended their judicial custody till November 17, the next date fixed for hearing.

It was the second supplementary charge sheet in the terror funding case filed by the National Investigation Agency (NIA) here in a special court under new Unlawful Activities (Prevention) Act.

The agency charged them of allegedly receiving funds from Pakistan to carry out terrorist activities and stone pelting in 2010 and 2016.

Malik was arrested on April 4 for his role in fomenting unrest in Kashmir during separatist agitations in 2010, and in 2016 after the killing of Hizbul Mujahideen commander Burhan Wani.

“New material shows the relationship of the persons charge-sheeted with the cross border accused Hafiz Saeed (co-founder of Lashkar-e-Taiba and the chief of Jamaat-ud-Dawah) and Syed Salahudeen (the head of Hizb-ul-Mujahideen),” said the NIA. The NIA in 2017 arrested several separatists belonging to the two factions of Hurriyat Conference led by Mirwaiz Umar Farooq and Syed Ali Shah Geelani, respectively, for terror funding.

The NIA had registered the case in May 2017 against various separatist leaders who were acting in connivance with terrorist organisations like Hizbul Mujahideen, Dukhtaran-e-Millat, and Lashkar-e-Taiba (LeT) for collecting funds through illegal means for funding terrorist activities and stone pelting in Jammu and Kashmir.