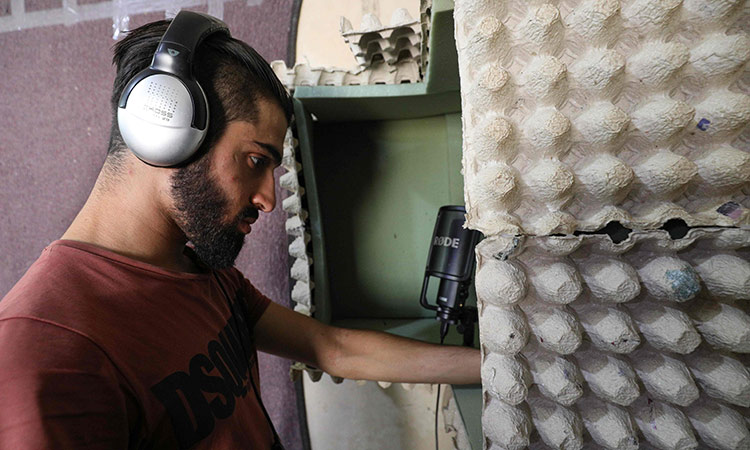 Amir Al Muarri works with earphones on, in front of his microphone-equipped booth, padded with soft foam and egg cartons, in his room. Omar Haj Kadour / AFP

A 20-year-old Syrian rapper Amir Al Muarri has become a sensation on social media platforms for his blunt but musical take on the ground realities in his conflict-torn country.

Muarri, who hails from Idlib, has seen it all a conflict-ridden country goes through, be it blighted buildings, regime bombings, shuttered universities or militants' domination.

And he minces no words when he says that he chose rap instead of going for more accepted form of music in the region because he deleibartely wanted his songs to be politcal and the rap genre is indeed political.

"I chose rap because the genre is political," Muarri said.

"It speaks out against dictatorship, tyranny, government corruption, and social issues."

With the help of friends and the internet, Muarri last month put out his first music video, titled "On all fronts".

"It conveys what's in the hearts of people here," he said. 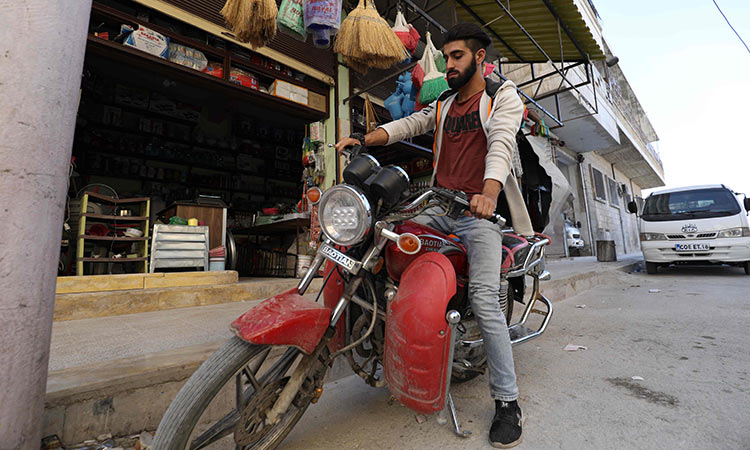 It tackles not just Syria's civil war, but also day-to-day complaints in the bastion dominated by the country's former Al Qaeda affiliate.

The video, posted on YouTube, shows Idlib residents from all walks of life bobbing their heads in slow-motion to the beat.

There is a rescue worker in a hard hat, a member of the so-called White Helmets who have been pulling bodies and survivors from bombed-out buildings.

But it also features some of the ordinary people who live in Idlib: a man watering his plants, a barber, and two young boys on a balcony playing chess. 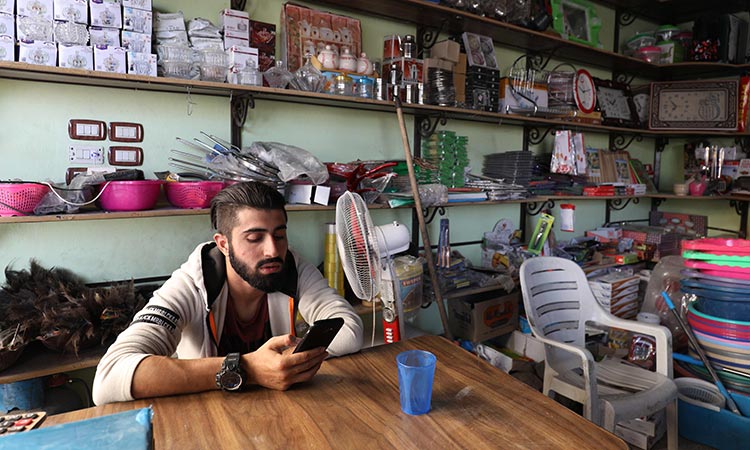 Amir Al Muarri listens to his favourite artists on his telephone at his father's shop. Omar Haj Kadour / AFP

He had little experience mixing tracks, but he soon learned with the help of friends found on the internet, including many based in neighbouring Lebanon.

"Sometimes I send them tracks and they do the mixing," he said.

When he is not making music, Muarri works in his father's small shop selling cleaning detergent and other household supplies.

Between customers, he whips out a phone and listens to his favourite artists: El Rass, but also fellow Syrian rapper Bu Kolthoum, and Shiboba from Saudi Arabia.

From the West, he said he likes Tupac and old school rap that denounces racism and oppression − but also Beethoven and Vivaldi.

For his next tracks, he said he might write about the tens of thousands made homeless in recent fighting, or even the endless conferences that have failed to end the conflict.

Above all, he just wants to be heard.