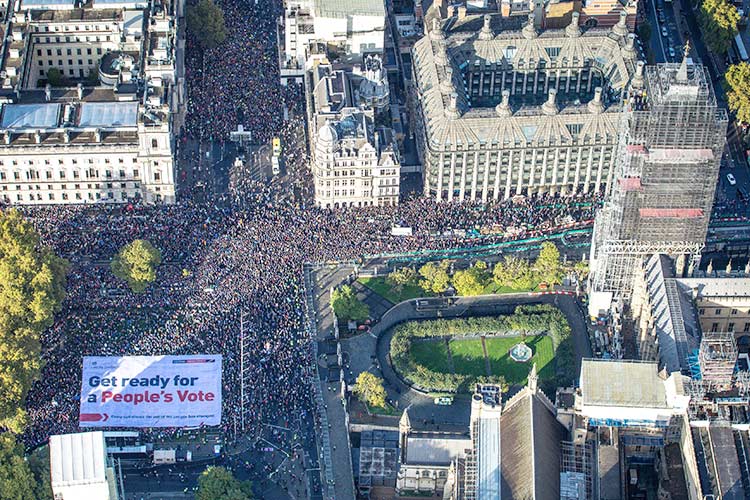 An aerial view of the anti-Brexit protest in Parliament Square, London. AP

October 31 or Halloween, a festival observed in some countries like the US and Canada, is a time for kids to be kitted out in witches’ togs, pumpkins carved in such a way as to reveal weird faces and an occasion for telling scary tales. For Boris Johnson, the British Prime Minister, nothing seems to be scarier, politically at least, than the October 31 deadline for the UK to leave the European Union being breached.

On Saturday, MPs scuppered his plans when they decided overwhelmingly to postpone a vote on Brexit.

Over a million demonstrators marched from Park Lane to Parliament on Saturday, calling for a fresh public vote with the choice of remaining in the European Union.

Perhaps no other issue has faced so much debate, opposition, or upheaval in recent times, which claimed the political life of former British premier David Cameron. In his new book For the Record, Cameron says his ‘greatest regret’ is that those who wanted to remain with the EU were outnumbered by those who were against it.

A defiant Prime Minister Boris Johnson said he would resist attempts to delay Britain's departure from the European Union beyond the end of the month.

But this went contrary to the wishes of Westminster, where, in a rare weekend sitting, lawmakers voted 322-306 to withhold their approval of the Brexit deal until legislation to implement it had been passed.

Johnson said he still aimed to meet the Oct. 31 deadline and would tell EU leaders that delaying Brexit was a bad idea.

UK could call an election within days BBC political editor

This was the second shock for Johnson after the Supreme Court nixed his bid to suspend Parliament with barely a few weeks remaining for the Brexit deadline.

Prime Minister Boris Johnson has vowed to leave the EU even if Britain was unable to forge a deal with Brussels — a scenario that economists warn would be devastating for the country's economy.

“I will not negotiate a delay with the EU neither does the law compel me to do so," Johnson said. "I will tell our friends and colleagues in the EU exactly what I've told everyone in the last 88 days that I've served as prime minister: that further delay would be bad for this country, bad for the European Union and bad for democracy." 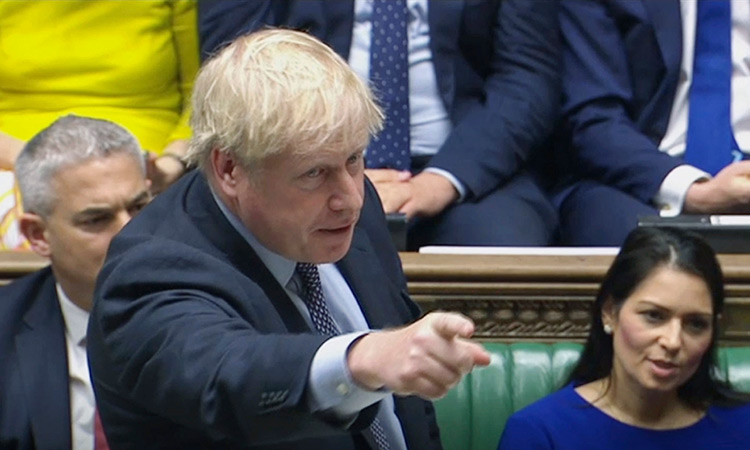 Boris Johnson speaks during a debate inside the House of Commons in London on Saturday. AP

French President Emmanuel Macron seemed to agree. Macron's office said he spoke to Johnson by phone and insisted on the need for "quick clarification of the British position on the accord."

The president's office said Macron indicated to the British prime minister that "a delay would be in no one's interest." Johnson told the president of the European Council Donald Tusk on Saturday that he would send him a letter within the day to ask for a delay to Brexit. 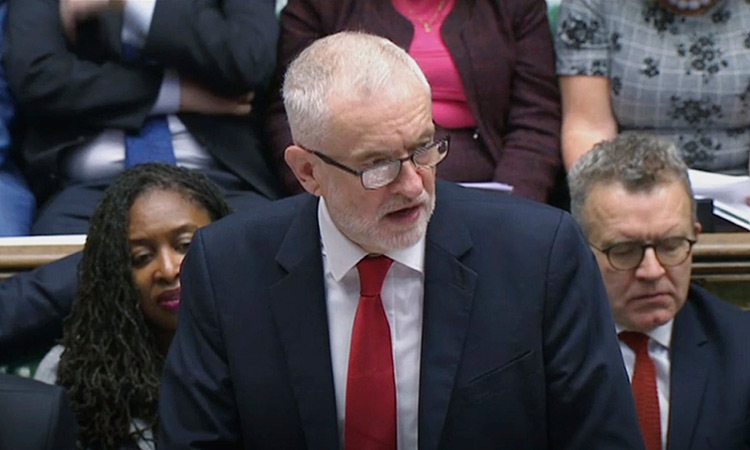 The leader of the House of Commons, Jacob Rees-Mogg, said the government would hold a debate on Monday on its Brexit-implementing legislation – effectively a second attempt to secure approval for the deal.

It's unclear whether that would be allowed under House of Commons rules against holding repeated votes on the same question. Bercow said he would make a ruling on Monday.

Securing a deal was a personal victory for Johnson, a figurehead in the Leave campaign who has vowed to deliver Brexit on October 31 come what may.

But parliament -- like the frustrated public -- is still bittered divided over how and even if Britain should end almost half a century of integration with its closest neighbours. 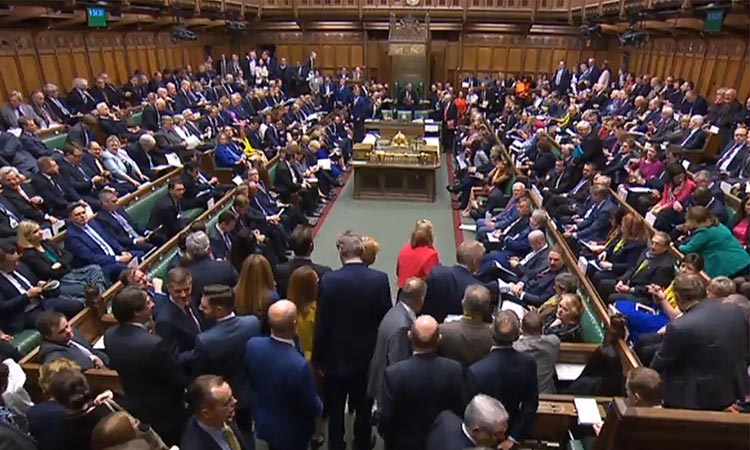 A video grab from footage shows members of parliament crowding the benches in London. AFP

The debate coincides with a mass demonstration to parliament demanding a second referendum, with an option to reverse Brexit.

A defeat for Johnson would trigger a law requiring him to ask EU leaders to delay Brexit for what would be the third time. He has said he would "rather be dead in a ditch" than do so.

Any extension would depend on all 27 EU leaders saying yes.

Johnson took office in July after his predecessor Theresa May failed three times to get her own divorce deal through parliament.

He insists that Brexit must happen this month to end the uncertainty that has weighed on the economy and dominated political and public debate.

However, the vote rests on a knife-edge. 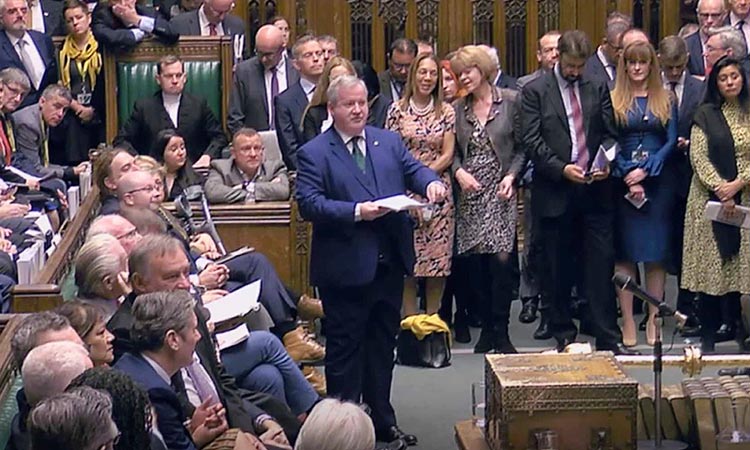 Northern Ireland's Democratic Unionist Party, which supports Johnson's minority government, will vote against the agreement because of its arrangements for the British province.

Labour, led by veteran leftist Jeremy Corbyn, is set against the deal.

"Boris Johnson's sell-out deal risks triggering a race to the bottom on rights and protections: putting food safety at risk, cutting environmental standards and workers' rights, and opening up our NHS (National Health Service) to a takeover by US corporations," said Corbyn.

Eurosceptic newspapers urged MPs to back the deal.

The Daily Express front page said: "Respect the will of the people and let's move on."

The Daily Telegraph said it was Britain's best chance for an orderly departure. 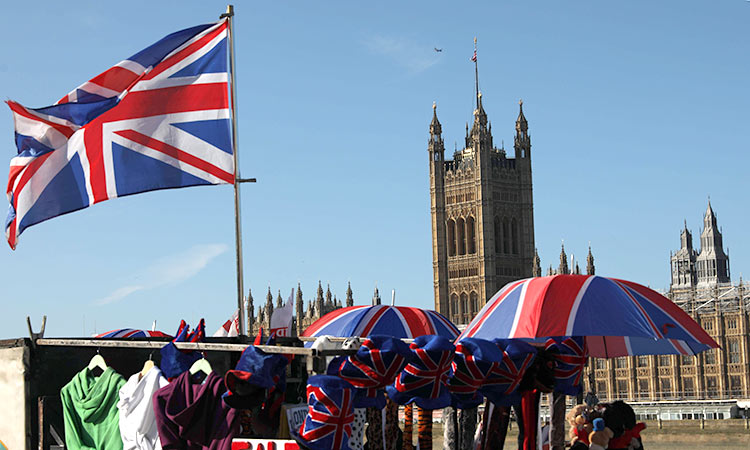 This picture shows the Palace of Westminster housing the Houses of Parliament in central London. AFP

"People are sick and tired of the delay and fed up with procedural trickery," it said of the proposed amendment.

An online Survation poll of 1,025 adults on Thursday and Friday for the "Daily Mail" found that 50 per cent said MPs should vote for the deal, while 38 per cent said not.

Meanwhile, The Times said: "On behalf of a bored and disillusioned country, increasingly angry with Westminster, MPs should back the deal."

EU leaders in Brussels this week urged lawmakers to back the deal, to allow both sides to move on to discussing their future relationship.

The deal covers Britain's financial settlement, protects the rights of EU citizens and sets out a post-Brexit transition period potentially until 2022 to allow both sides to agree new trade terms. 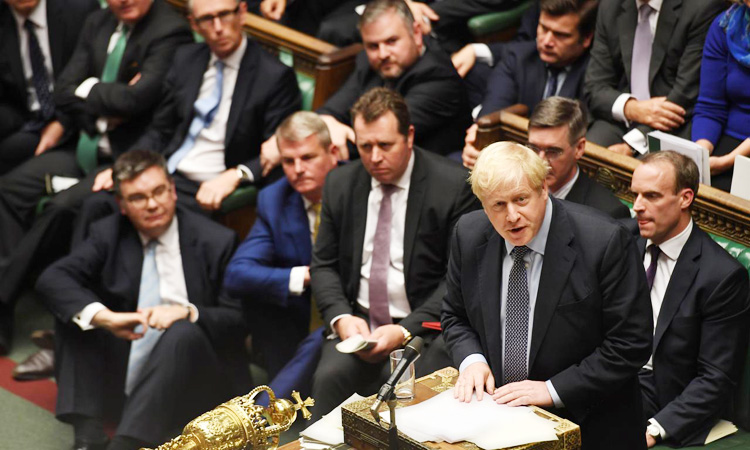 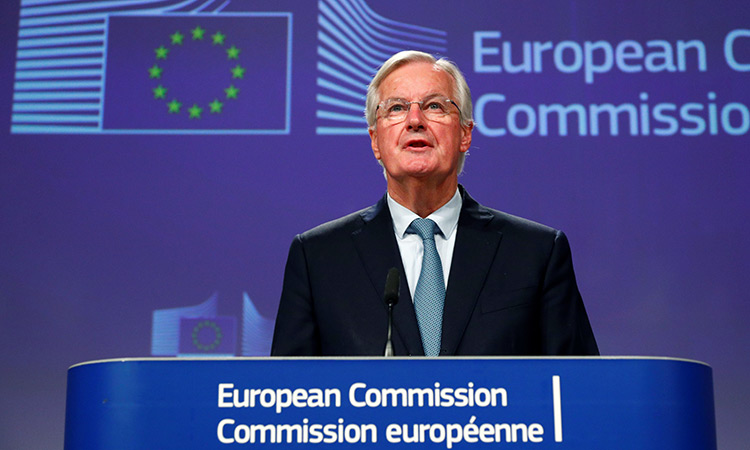 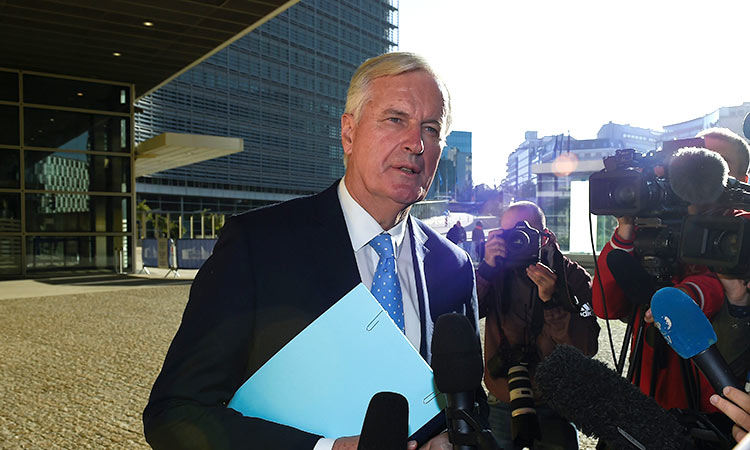