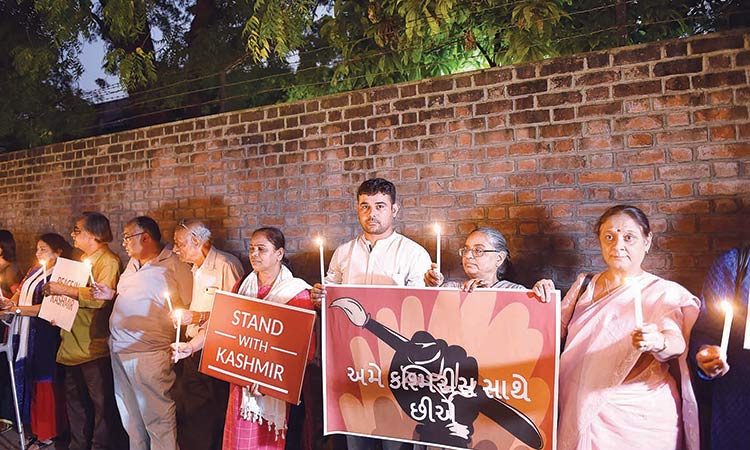 People participate in a candlelight vigil in Ahmedabad on Thursday to express solidarity with the people of Kashmir. Agence France-Presse

The Jammu and Kashmir administration on Thursday abolished the Legislative Council ahead of bifurcation of the erstwhile state into two union territories on October 31.

The 116-strong staff of the council have been directed to report to the general administration department (GAD).

The order of abolition issued by administrator Farooq Ahmad Lone, stated that “consequent to the abolition of the Jammu and Kashmir Legislative Council in terms of Section 57 of Jammu and Kashmir Reorganisation Act, 2019 — all the staff of the state legislative council shall report to the GAD by October 22.” It also stated that the Secretary of the Council shall hand over the council building along with the furniture and electronic gadgets to the director (estates).

“The Secretary, Jammu and Kashmir Legislative Council shall transfer all records pertaining to the Council Secretariat including related legislative business to the Department of Law, Justice Parliamentary Affairs for record,” the order issued on October 16 stated.

It was also stated that vehicles purchased for the legislative council from time to time are to be transferred to director (state motor garages).

The 36-member state council was established in 1957 after an Act passed by Parliament.

Further lieutenant-governors for the two union territories will replace the J-K Governor. The total number of Legislative Assembly seats will be 107 in Jammu and Kashmir and out of these 24 will remain vacant because these seats are in Pakistan-occupied Kashmir (PoK) which is illegally occupied by Pakistan.

The Assembly will legislate on items in the State List, except public order and police, as is the case for other union territories.

Separately, non-local apple traders and truck drivers have moved to secure locations in Kashmir following attacks by militants over the last few days.

A trader from Punjab and his truck driver were fired upon by militants on Wednesday evening at Tranz village in Shopian district.

The trader died, while the driver was injured.

Earlier in the day, a brick-kiln worker from Chhattisgarh SA Sagar was killed by militants at Nihama village in Pulwama district.

After the killings, fear has overtaken the non-Kashmiri traders and labourers working in Shopian.

Sources said around 500 trucks from outside the valley have been kept in protection at a bus stand, fruit Mandi and District Collector’s office in Shopian by the administration.

“It is obvious that the shutdown is fizzling out, so militants are resorting to other tactics,” Farooq Khan, advisor to Jammu and Kashmir Governor told IANS.

“Any good thing we do, Pakistan will make desperate attempts to counter it.” He said for the fruit growers the fruit are like their children and such acts won’t be tolerated.

“Apple has been plucked from the fields and the process will continue,” he said. “The area is already secured. Security will be beefed up more to ensure protection of people linked with fruit trade.” The police have put up posters of militants who it believes are involved in the recent killing of the non-locals in the valley. Munir Khan, Additional Director General, Law and Order, said the killing of the non-locals look like a pattern to disturb and aggravate the situation.

Separately, as part of plans to celebrate National Unity Day on October 31 on a grand scale at the Statue of Unity at Kevadiya in Gujarat, the Union Home Ministry has directed all state police chiefs to send contingents for a parade on lines of the Republic Day parade and also to send nominations and recommendations for the Sardar Patel National Unity Award for 2019.

Union Home Secretary Ajay Kumar Bhalla in a letter to state police chiefs has also suggested to display the portrait of Sardar Patel along with message — ‘We will always keep India’s security and unity intact’ — in all offices of Central Armed Police Forces and police offices across the country to inspire people and personnel.