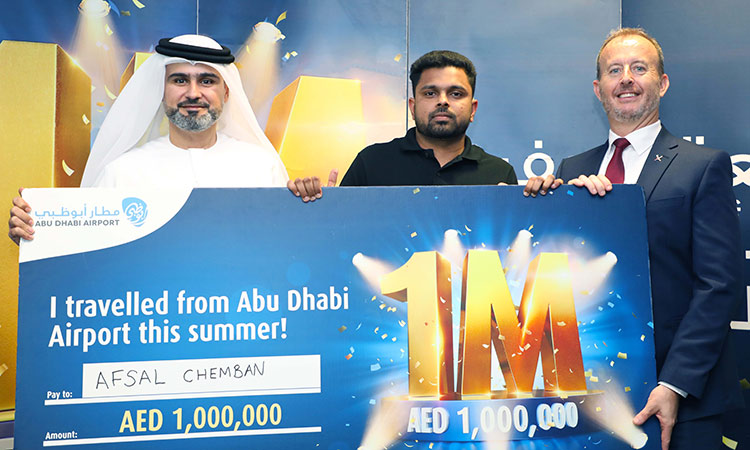 Upon the conclusion of the ‘Feel Good. Fly AUH’ campaign, Abu Dhabi airports has announced the winner of the Dhs1 million prize.

Passengers who travelled through Abu Dhabi International airport (AUH) between June and August 2019 were entered into the draw for the highly sought after prize.

The winner, Afsal Chemban was revealed during a special live-streamed draw event organised by the airports group at Abu Dhabi International airport on Monday, Sept.30, 2019.

The announcement follows the conclusion of the popular ‘Feel Good. Fly AUH’ campaign, which was open to all passengers travelling through the airport over the summer and was the result of Abu Dhabi airports’ efforts to provide a unique and memorable experience for travellers from around the world.

Bryan Thompson, Chief Executive Officer of Abu Dhabi airports, said: "At Abu Dhabi airports we are delighted to provide our passengers with exciting and rewarding offers and opportunities, in addition to delivering a smooth and seamless travel experience. Today, we are proud to take a part in changing the life of one of our passengers with the awarding of our Dhs 1 million prize, and we would like to thank Chemban for travelling through Abu Dhabi International airport and participating in our extraordinary ‘Feel Good. Fly AUH’ campaign.”

"We are pleased with the success of our ‘Feel Good. Fly AUH’ campaign, especially with how well it was received by travellers. Through the campaign we were keen to highlight the special features and services offered by Abu Dhabi International airport, in terms of comfort, convenience and efficient processes including quick check-in, security and immigration procedures. With the campaign now concluded, we are also looking forward to launching our special winter travel season campaign, in line with our vision of becoming the world’s leading airports group,” added Thompson.

Afsal Chemban said: "When I participated in the raffle draw organised by Abu Dhabi International airport, I did not expect to win the grand prize, especially knowing that hundreds of thousands of other passengers would also be participating. I never thought that travelling through Abu Dhabi International airport would change my life like this, and I am incredibly grateful. I would like to thank Abu Dhabi airports, which in my experience has always tried to provide travellers with great services and has become my favourite airport from which to travel to and from the UAE.”

The ‘Feel Good. Fly AUH’ campaign launched in the summer of 2019 enabled passengers travelling through Abu Dhabi International airport to enter into a raffle draw for Dhs1 million and provided them with the option of redeeming one of four exciting offers: a free Careem ride to AUH; a voucher for Dhs 100 to spend in Abu Dhabi Duty Free; a free VIP Terminal departure from AUH; or free 7 days parking service at the airport.