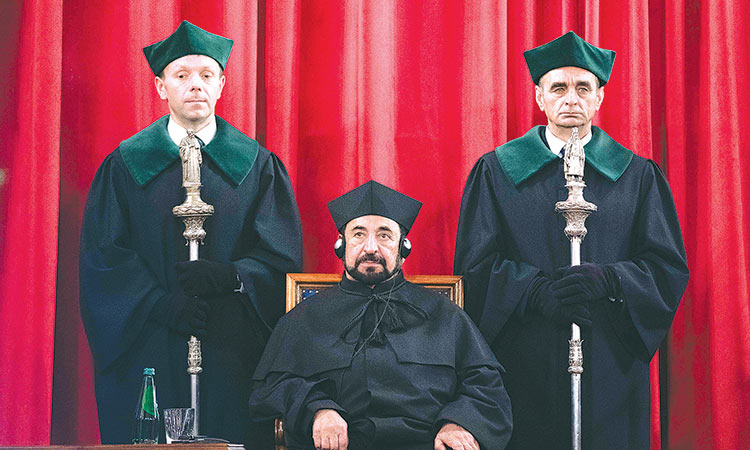 Dr Abdul Rahim Yousef Al Awadi, UAE Ambassador to Poland, and a delegation from Jagielski University received the Sharjah Ruler at the airport.

Sheikh Sultan has affirmed that the Emirate of Sharjah has been working for several decades to support direct communication between peoples and communities of the world via cultural dialogue.

This came during a speech delivered by the Ruler of Sharjah on Tuesday, at a ceremony held by the Jagielski University in Krakow, Poland, on the occasion of the centenary of the founding of the Department of Oriental Studies at the University, during which Sheikh Sultan was conferred the Plus Ratio Quam Vis Gold Medal in recognition of his support to the cultural and civilisational exchange between nations and peoples.

Sheikh Sultan said, “We are delighted to extend our sincere thanks to the Professor Wojciech Nowak, President of the Jagielski University and his colleagues for inviting us to attend the celebration of the 100th anniversary of the founding of the Department of Oriental Studies at this prestigious university, which coincides with the convening of the International Languages and Civilisations Conference held at the university this week. We also extend our sincere thanks and appreciation to the Honouring Committee of the University for their decision to award us the gold medal of the university, and this is a great honour for us that we will cherish for life.”

Sheikh Sultan expressed his appreciation for the interest the Jagielski University takes in the in-depth study of languages and civilisations in the world in general and the East in particular, appreciating the University’s keenness to promote and support these studies, including Arabic and Islamic civilisation since long, and celebrating it as a manifestation of civilisation intercommunication and dialogue with the other.

“Some of you may know how passionate we are to study history and civilisations of different eras. We believe in the unity of the basic human components wherever human beings exist in this world. We also believe in the importance of the integration and development of civilisations resulting from dialogue based on understanding and acceptance of customs, traditions and cultures of the world’s communities, supporting their similarities and bringing their differences closer together,” His Highness said, adding, “We do not wish that the idea and principle of ‘Clashes of Civilisations’ would be the main driver for the development of events in the world today and in the future.”

Sheikh Sultan pointed out that the Emirate of Sharjah, for several decades now, has worked to support direct communication between the peoples and communities of the world through cultural dialogue in all its components. In order to achieve this, our paths and channels were multiple – we supported the establishment of specialised institutes and centres in some world’s distinguished universities to allow researchers to delve deeper into the study of cultural components, continuity and interaction of societies and peoples in the world in general and in our region in particular, explaining that these institutes are now among the important sources of in-depth knowledge in areas of specialisation in our region to which researchers and decision makers in many countries resort.

He continued, “We have also organised cultural and artistic events in many countries of the world so that their communities can learn about some aspects of our customs, traditions and arts. We have also held conferences and seminars inside and outside Sharjah, and hosted researchers and students from different parts of the world. We were delighted to receive professors and students from Jagielski University in Sharjah in April last year to whom we were keen to give the opportunity to be acquainted with the people and community of Sharjah.” 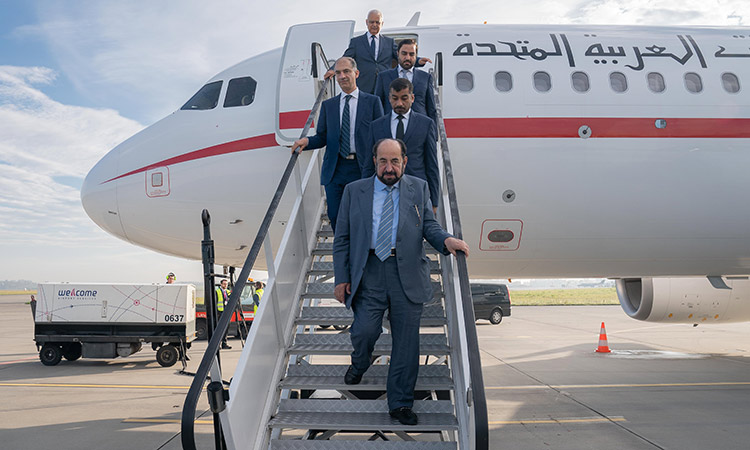 The exhibition at library includes a copy of Sahih Al Bukhari 's book, Part V, dating back to 1535.