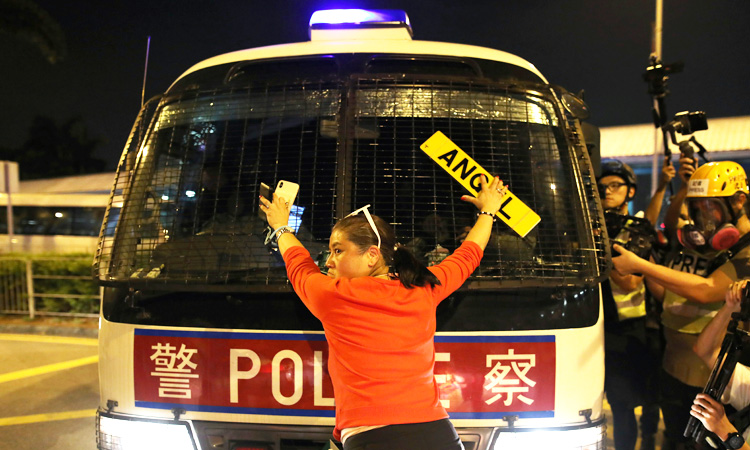 An anti-govt demonstrator stands in front of a police vehicle during a protest against the invocation of the emergency laws in Hong Kong on Monday. Ammar Awad/ Reuters

A Hong Kong court has granted an injunction to ban anyone from blocking or damaging areas used to house married police officers and other disciplined services that have been targeted in more than four months of anti-government protests.

Demonstrators have besieged police quarters amid escalating violence in the Chinese-ruled city, hurling petrol bombs and other objects at buildings and damaging facilities, police said in a statement on Tuesday.

The injunction also prohibits the obstruction of roads and bans people from shining laser pens or other flash lights at police facilities. 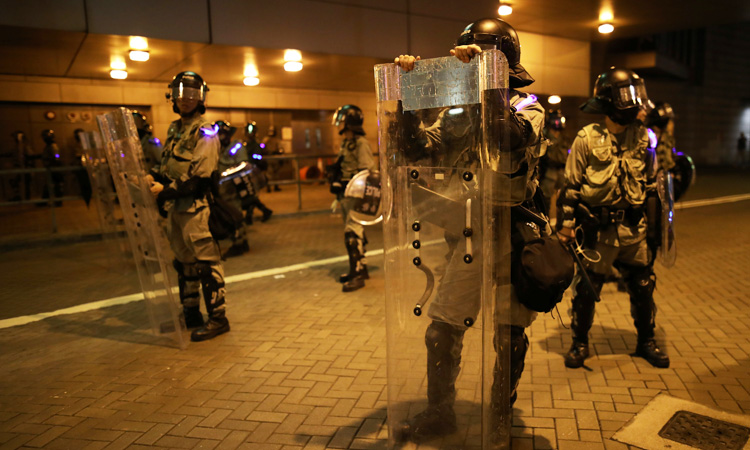 Riot police officers stand guard during a protest against the invocation of the emergency laws in Hong Kong.

Anti-government protesters, many masked and wearing black, have thrown petrol bombs at police and central government offices, stormed the Legislative Council, blocked roads to the airport, trashed metro stations and lit fires on the streets of the Asian financial centre.

The government has refused to concede to the protesters’ demand for an independent inquiry into accusations of police brutality.

Police, who have beaten protesters on the ground with batons, say they have shown restraint.

Tens of thousands of mostly young pro-democracy activists pleaded for help from the United States on Monday evening in the first legal protest since the introduction of colonial-era emergency laws earlier this month.

The protests began in opposition to a now withdrawn extradition bill that would have allowed suspects to be sent to China, but have broadened into a pro-democracy movement amid fears that Beijing is undermining Hong Kong’s freedoms.

Britain returned Hong Kong to China in 1997 under a “one country, two systems” formula, which gives it wide-ranging autonomy and freedoms not enjoyed on the mainland.

The Hong Kong and Chinese governments have repeatedly warned foreign governments not interfere in the territory’s internal affairs or fan anti-China sentiment.