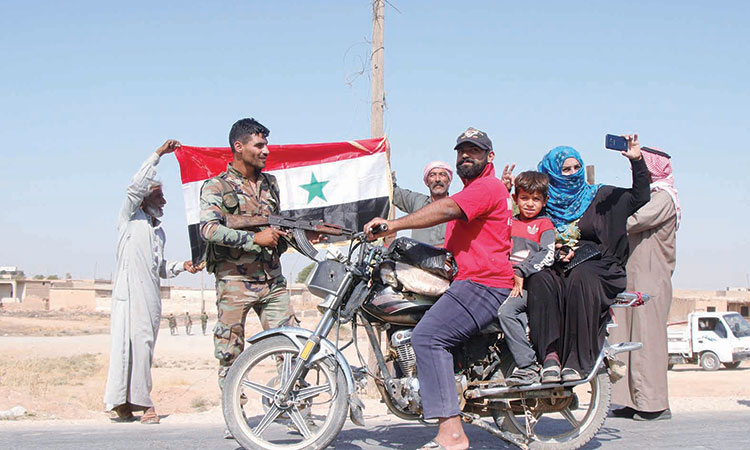 People welcome Syrian troops as they enter the village of Ghebesh, west of the town of Tal Tamr, Syria. Associated Press

Turkey on Monday accused Kurdish forces of deliberately releasing Daesh prisoners held at a prison in the Syrian border town of Tal Abyad.

“Before they got there, (Kurdish) PKK/YPG terrorists set free the Daesh militants in an attempt to fuel chaos in the area,” he said, claiming that no doors had been broken in the prison.

Western governments have voiced concern that Turkey’s operation against the Kurdish People’s Protection Units (YPG) in northern Syria would lead to Daesh extremists escaping from detention centres in the region.

Kurdish authorities said Sunday that 800 Daesh family members being held in a camp at Ain Issa had managed to flee due to Turkish bombing, and that five extremists had escaped another prison on Friday.

“The folly of trusting a terrorist group for keeping watch over another is exposed for all,” said the Turkish official.

President Recep Tayyip Erdogan earlier hit out at “disinformation” reports that Turkey was responsible for the escape of extremists.

“This is actually disinformation aimed at provoking America or the West,” he said, quoted by the Hurriyet daily.

Some relatives of the Daesh families in the Ain Issa camp told AFP that Kurdish guards had forced the women and children to leave.

“Today (Sunday), the Kurdish guards opened the doors to the foreign women and asked them to leave the camp,” said the mother of a 24-year-old woman, who had been kept at the camp with her infant son for the past 18 months.

“They didn’t escape. They (the Kurdish forces) didn’t want them. They were expecting to be taken over by Syrian or Turkish forces, but they were kicked out. For several days, the bombs were falling closer and closer to the camp, where there were no more NGOs, no more help,” she added.

President Donald Trump on Monday rejected criticism that his decision to remove US troops from the region was risking a mass escape of Daesh prisoners.

“Kurds may be releasing some to get us involved. Easily recaptured by Turkey or European Nations from where many came, but they should move quickly,” he wrote on Twitter.

France, which accounts for the largest number of European extremists in Syria, said Sunday it was “worried” by the situation and has called for an end to the Turkish offensive.

Meanwhile, Russia-backed Syrian forces wasted no time in taking advantage of an abrupt US retreat from Syria on Monday, deploying deep inside Kurdish-held territory south of the Turkish frontier less than 24 hours after Washington announced a full withdrawal.

Washington’s Kurdish former allies said they invited in the government troops as an emergency step to help fend off an assault by Turkey, launched last week after President Donald Trump moved his troops aside in what the Kurds call a betrayal.

Washington’s decision to abandon a policy it had pursued for five years gives Turkish President Tayyip Erdogan and Russia’s Vladimir Putin free hands to shape the battlefield of the world’s deadliest ongoing war.

In particular, the Syrian army deployment is a victory for President Bashar al-Assad and his most powerful ally Russia, giving them a foothold in the biggest remaining swathe of the country that had been beyond their grasp.

They will now face Turkish armed forces along a new front line hundreds of miles long.

Syrian state media reported that troops had already entered Tel Tamer, a town on the strategically important M4 highway that runs east-west around 30 km south of the frontier with Turkey. State television later showed residents welcoming Syrian forces into the town of Ain Issa, which lies on another part of the highway, hundreds of miles away.

Ain Issa commands the northern approaches to Raqqa, former capital of the Daesh “caliphate”, which Kurdish fighters recaptured from the militants two years ago in one of the biggest victories of a US-led campaign.