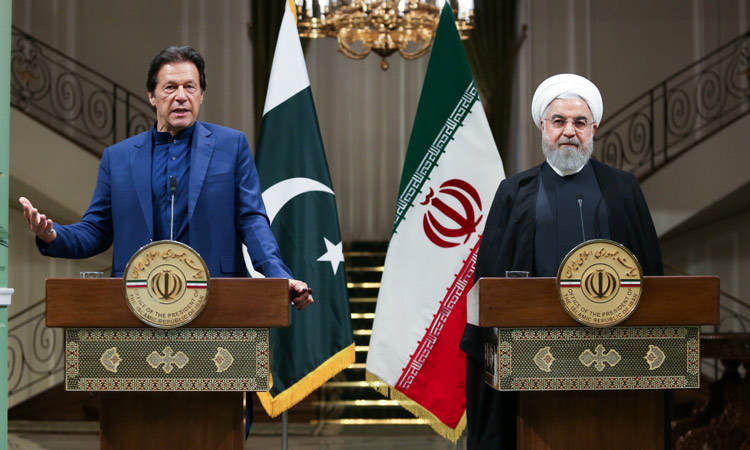 Hassan Rouhani and Imran Khan during a joint press conference in Tehran on Sunday. AFP

Prime Minister Imran Khan visited Iran on Sunday on a mission to act as a "facilitator" between Tehran and Riyadh and try to defuse rising tensions in the Middle East.

Imran landed in Tehran around midday and met President Hassan Rouhani at the presidential palace.

He was also scheduled to hold talks with Iran's supreme leader Ayatollah Ali Khamenei, before travelling to Riyadh on Tuesday.

The premier reiterated that the reason for his trip to Iran and Saudi Arabia was to defuse rising tensions in the Middle East. “Pakistan will act as a facilitator, not as a mediator to help reduce tensions – now and in the future,” Imran told reporters as he stood alongside Rouhani.

"Whatever it takes we must never allow this conflict to take place, because we know, Mr President, that there is a vested interest that wants this to take place," he told Rouhani.

Noting that it was a "complex" issue that can be resolved through talks, Imran warned that any conflict between Iran and Saudi Arabia would "cause poverty in the world."

“Mr President, the main reason I came over with my delegation is that we don’t want conflict in this region. Pakistan suffered 70,000 casualties in the War on Terror. Iran is still suffering and I don’t want more people to suffer in this part of the world.

“This visit to Iran and the visit which I will undertake to Saudi Arabia on Tuesday, is a Pakistan led initiative. I will go with a positive mind to Saudi, Pakistan will play the role of a facilitator. We are willing to host both countries in Islamabad so that they could try and iron out their differences.”

“We have Iran as our neighbour and our ties with Iran go way back. Saudi Arabia is one of our closest friends – it has helped us in our times of need,” said Imran.

Pakistan has strong relations with Saudi Arabia, with more than 2.5 million of its nationals living and working in the kingdom, but it also maintains good relations with Iran and represents Tehran's consular interests in the United States.

This is Imran's second visit this year to Iran, which shares a border of about 1,000 kilometres with Pakistan.

Emphasising that the visits to Tehran and Riyadh were Pakistan's "initiative," Imran said he was also approached by US President Donald Trump to "facilitate some sort of dialogue between Iran and the United States."

Rouhani thanked Imran for visiting Iran to discuss the Gulf security issue. "We openly welcome any move to provide peace in the region. We are ready to assist Pakistan,” he said.

The Iranian president described his talks with the Pakistani premier as promising. Imran met both Rouhani and Trump at the United Nations General Assembly last month, shortly after he visited Crown Prince Mohammed Bin Salman in Saudi Arabia.

Imran thanked the government of Iran for supporting the people of Kashmir, who are under a curfew for more than two months now. "Thank you for speaking up against the humanitarian disaster unfolding in Kashmir,” Imran told the Iranian president.

PM will raise voice for people of Kashmir at UN, says Lodhi