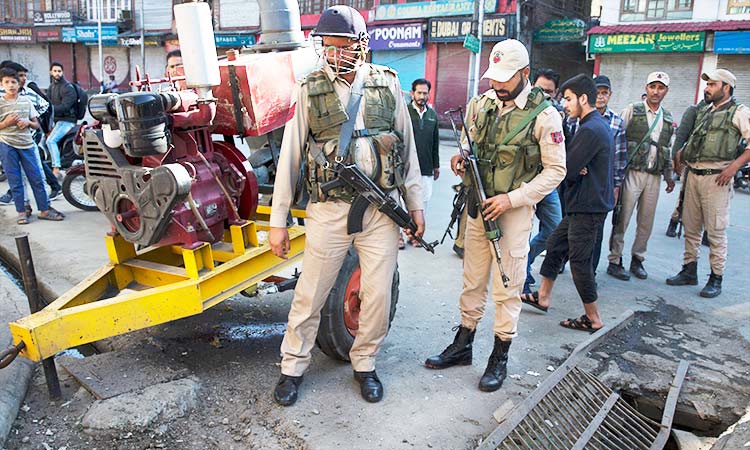 Policemen and locals inspect the site of an explosion in Srinagar on Saturday. Dar Yasin / AP

The Indian government said on Saturday it would unblock most mobile telephone lines in Kashmir in a major easing of a two-month-old security clampdown since cancelling the region's autonomy, but a grenade attack in the main city highlighted tensions over New Delhi's actions.

Police said militants threw a grenade in a market area near the old town in Srinagar injuring seven people.

Most stores, schools and businesses across Kashmir have been closed since the government brought the region under tighter central control on Aug.5.

But the easing of the communications blockade was the latest bid by the authorities to show that its tough policies were working.

Government spokesman Rohit Kansal told a press conference in Srinagar, just before the grenade blast, that authorities had decided to end the phone blockade after a security review.

All phones linked to a monthly subscription "will stand restored and be functional from noon on Monday," he said, adding that the measure would apply to all of Kashmir.

Kansal said restrictions on public movement had been lifted in "99 percent" of Kashmir but gave no indication on whether internet services would also be restored.

The government, however, on Thursday lifted restrictions on tourists travelling to the region and released three politicians among hundreds of people detained after Aug.5.

Kansal said all those detained would be released gradually after their cases are reviewed.

The leader of the opposition Congress party in the region, GA Mir, was sceptical of the government's announcement.

"We have been hearing for days that they would restore mobile phones. So unless they actually do this on Monday, this is just another one of their announcements," he said.

He also questioned the move to lift restrictions for tourists, when authorities have been saying throughout the clampdown that "life is normal" in Kashmir.

"The government claims not a single bullet was fired. Then what was the panic situation that tourists were forced to leave in the first place?" Mir said.

Iltija Mufti, a daughter of Kashmir's former chief minister Mehbooba Mufti, one of the politicians in detention, said international pressure has forced the government's hand but the response was "very little, very late."

The phone clampdown caused widespread hardship, according to activists and community leaders. It meant ambulances and other emergency services could not be called to take patients to hospitals.

Iltija Mufti said that without internet people could not pay their mobile phone bills, "so what's the point of opening mobile lines? Will they get a service."