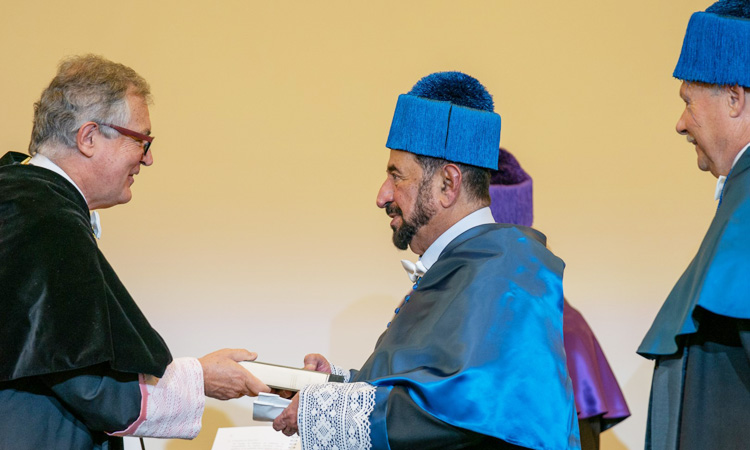 The Sharjah Ruler delivered an inspiring acceptance speech at the honouring ceremony held by the university in recognition of His Highness’s cultural efforts, in the presence of the university’s rector, deans as well as academics and political figures. 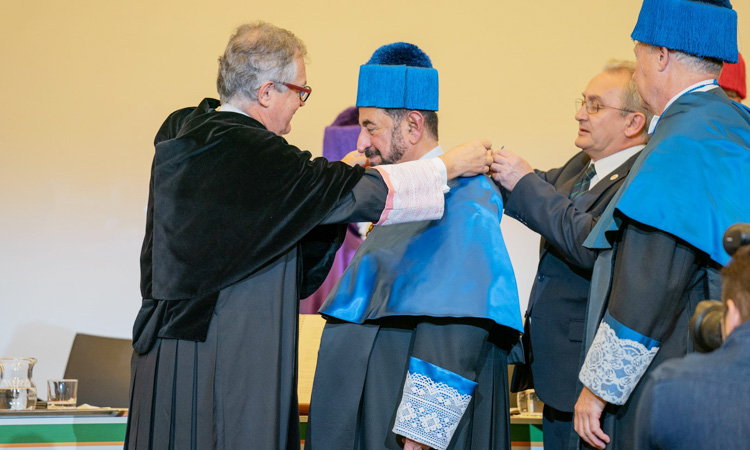 Sheikh Sultan receives an honorary doctorate from the prestigious academic institution of Autonomous University of Madrid.

His Highness The Ruler of Sharjah said: “I am delighted to be here and pleased to meet a large group of distinguished academics, researchers and guests from universities, government and private institutions. We extend our sincere thanks and appreciation to the professors of the Biology department, committee members of honorary degrees, the rector and board of trustees. We are grateful for this honour and will cherish it for life.”

“Some of you may know that I have been reading history and writing about it for a long time, History runs in my blood – I will not stop continuing my work in the field. I have studied many periods in Spain’s history. When I met with Professor Arturo Morales-Muniz accompanied by the Spanish Ambassador to the UAE, he wished that my speech would contain an Arabic poem.”

His Highness Sheikh Dr Sultan Al Qasimi recited a poem he authored for the occasion. 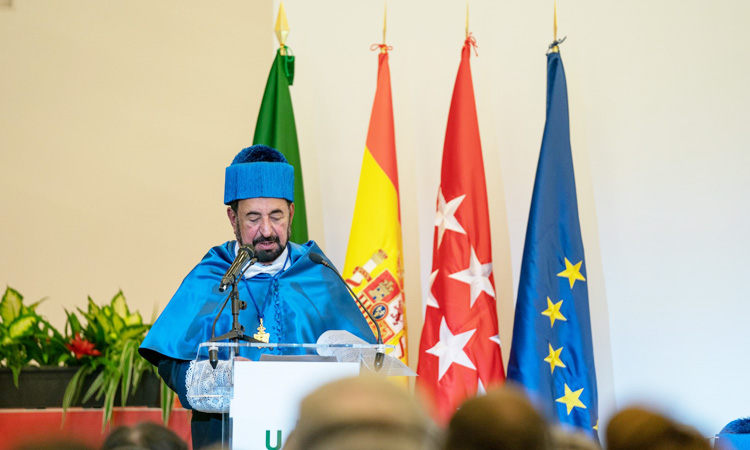 The Sharjah Ruler delivers an inspiring acceptance speech at the honouring ceremony.

“As for the present and the future, Sharjah and Spain enjoy a longstanding cultural, academic and humanitarian relationship. One of the most important aspects of this relationship is cooperation in the field of archaeological excavations. In 1996, a Spanish archaeological excavation mission from the Autonomous University of Madrid began its first season of work in the central region of Sharjah, led by Professor Dr Joaquin Cordoba Zuelo in partnership with Sharjah Archaeology Authority. The results of the excavation so far confirm our belief in the archaeological significance of this region.”

“We would like to point out that the Spanish mission unearthed an important and unprecedented discovery during the 2002 excavation season. They found an ancient underground canal irrigation system designed using a sophisticated technique of the Iron Age. Researchers believe that the unearthed system is the oldest discovered so far. This system in conjunction with camel domestication completely revolutionised the transportation of goods in the region; and helped inhabitants adapt better to the harsh desert environment. The mission discovered evidence of a clay brick processing plant, which was used to build permanent residences in the farming communities of the region.”

“On the 20th anniversary of the Spanish excavation in 2016, Sharjah Archaeology Authority in Madrid and the excavation mission held a joint exhibition in the National Archaeological Museum in Madrid showcasing select antiquities, which received great interest from visitors.” 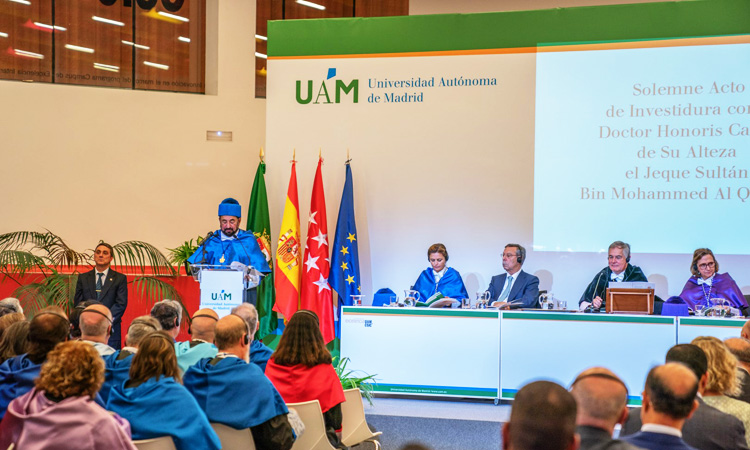 Sheikh Sultan delivers the speech in the presence of the university’s rector, deans as well as academics and political figures.

His Highness concluded his speech saying: “We are delighted to continue support for the cooperation between the Autonomous University of Madrid and Sharjah’s Archeology Authority, universities, and academies. We call on all to join hands and work together in all fields to advance knowledge and develop its applications that lead to the progress and development we all desire.

A speech was delivered by Prof Dr Rafael Garesse Alarcon, Rector of Autonomous University of Madrid. The rector outlined the scientific, educational and professional biographies, and the accomplishments of Sharjah Ruler in the field of research focused on advancing humanity. Alarcon said: “Our esteemed guest, His Highness the Ruler of Sharjah, has played a vital role in laying the foundation for knowledge development and its dissemination within and beyond his country. Although knowledge and authority are often on conflicting paths, His Highness is one of the few figures who was able to make them meet.”

After his speech, the rector presented the Sharjah Ruler with a Cowl, a symbol of the knowledge and wisdom possessed by the recipient, a ring representative of brotherhood with the university’s faculty members, and white gloves which represent scientific status, integrity and dignity.

The rector gifted His Highness a book, saying: “I would like you to preserve this book, it represents gratitude to those who gave you the knowledge that you have today.”

The Emiri Decree stipulates that the Al Dhaid Wildlife Centre, Al Hamriyah Mangroves Reserve, and Ghalil Al Sabt Reserve are to be added to the specialised bodies of the EPAA.