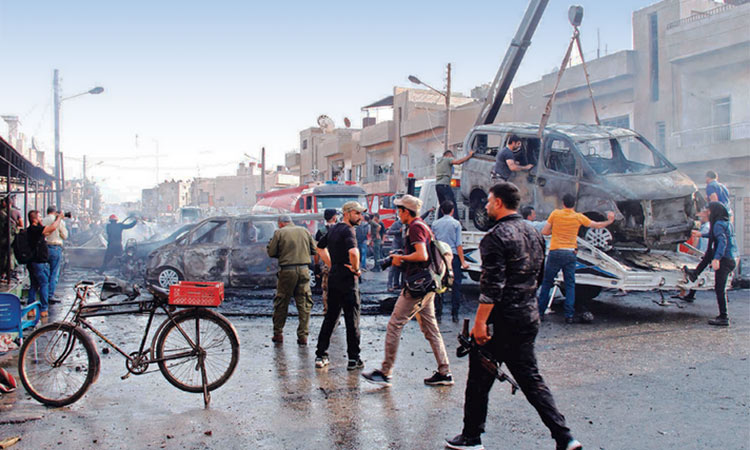 People gather at the site of an explosion in the northeastern Syrian Kurdish city of Qamishli on Friday. Agence France-Presse

President Donald Trump, whose order to pull back US troops from the border this week effectively triggered the intervention, said Washington would now seek to broker a truce.

US Defence Secretary Mark Esper “strongly encouraged” Turkey to halt its offensive as a prelude to such negotiations but Turkish President Recep Tayyip Erdogan swiftly responded by vowing the assault ‘won’t stop.’

In Al Hol, a camp holding relatives of Daesh suspects which lies outside the area targeted by Turkey, women started riots on Friday that Kurdish forces swiftly put down.

The risk that thousands of the militants they still hold could break free on the back of the Turkish assault could yet spur the international community into action.

But as the offensive went into its third day, the Kurdish-led Syrian Democratic Forces were fending for themselves, trying to repulse multiple ground attacks along a roughly 120 kilometre long segment of the border.

“There is heavy fighting between the SDF and the Turks on different fronts, mostly from Tal Abyad to Ras Al Ain,” the Syrian Observatory for Human Rights said.

The monitor said four civilians were killed in Tal Abyad when an air strike hit the car in which they were fleeing the fighting, while another three were shot dead by snipers around the border town.

That brings the civilian death toll to 17 on the Syrian side, while 17 have also been killed in Turkey.

That included eight civilians killed in a Turkish border town late Friday in what the local governor’s office said was a Kurdish mortar attack.

According to the Observatory, 54 SDF fighters have also been killed while Turkey has reported the deaths of four soldiers.

Ras Al Ain, Tal Abyad and other border towns between them have been almost emptied of their population in a huge wave of displacement.

Most of the 100,000 people the United Nations confirmed on Friday had been displaced travelled east towards the city of Hasakeh, which has not been targeted by Turkey.

Erdogan wants to create a buffer between the border and territory controlled by Syrian Kurdish forces, who have links with Turkey’s own Kurdish rebels.

He also plans to use the strip, which he envisions will be about 30 kilometres deep and is mostly Arab, as an area in which to send back some of the 3.6 million Syrian refugees who live on Turkish soil.

The violence was wreaking havoc across northeast Syria. One charity closed down a hospital it supported in Tal Abyad because the staff had fled and shelling led the Kurdish authorities to transfer an entire camp of people who had been displaced earlier in the Syrian war.

Turkey is still far from having reached the goals of its military invasion but the risk appears to be growing that detained Daesh fighters could break free.

A car bomb also went off Friday in Qamishli, one of the main towns in the Kurdish region, killing at least six people, civilians and members of the security forces, officials and the Observatory said.

The attack, which targeted a restaurant in the town centre, was claimed by Daesh, which has taken responsibility for a string of such attacks in Qamishli and elsewhere recently.

France called for a meeting of the anti-Daesh coalition to discuss growing fears that the extremist organisation could regroup if Turkey’s invasion creates a security vacuum.

According to the Kurdish administration, some 12,000 men are held in seven detention centres across Kurdish-controlled areas. 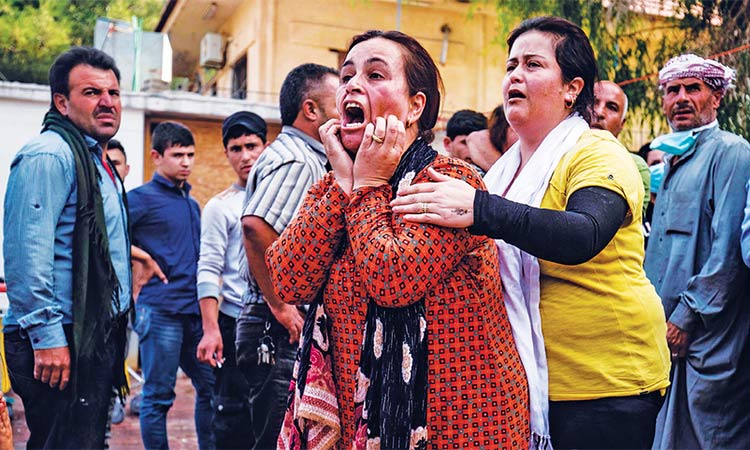 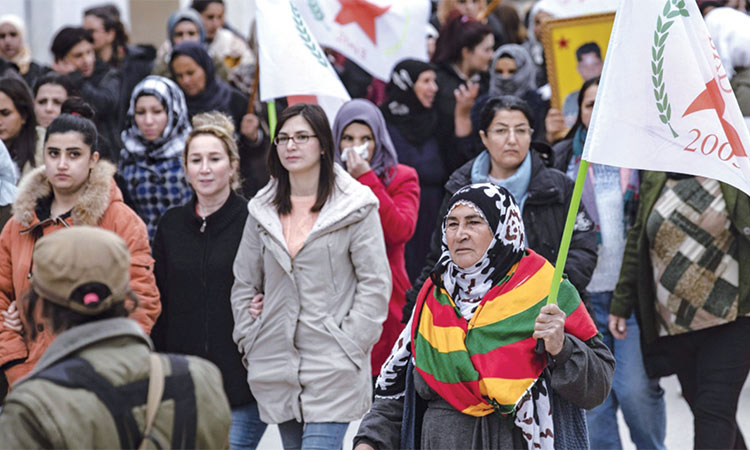