Over 100,000 flee fighting, 34 civilians killed in Turkey's offensive into Syria 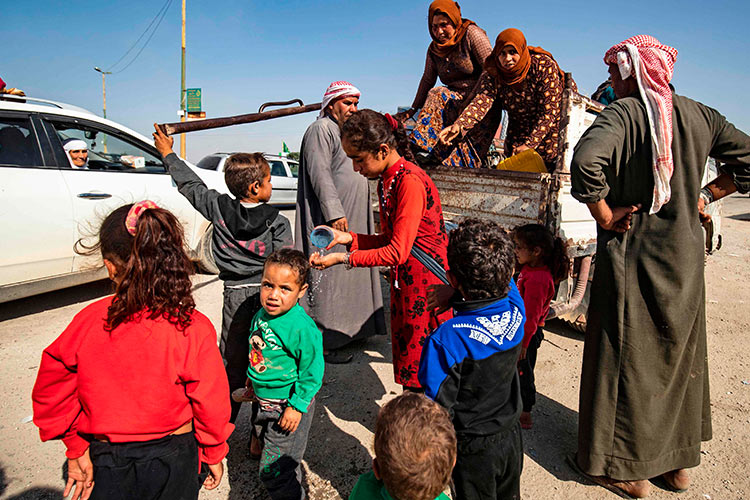 US troops in Syria came under fire from Turkish incursion

Meanwhile, Turkish forces faced fierce resistance from US-allied Syrian Kurdish fighters on the third day of Ankara's offensive in northern Syria, as casualties mounted, international criticism of the campaign intensified and estimates put the number of those who fled the violence at 100,000.

At least 34 civilians have been killed in the fighting. Turkey said it captured more Kurdish-held villages in the border region, while a hospital in a Syrian town was abandoned and a camp of 4,000 displaced residents about 12 kilometers (7 miles) from the frontier was evacuated after artillery shells landed nearby.

Reflecting international fears that Turkey's offensive could revive the Daesh group, two car bombs exploded outside a restaurant in the Kurdish-controlled urban center of Qamishli, killing three people, and the extremists claimed responsibility. The city also was heavily shelled by Turkish forces.

US President Donald Trump cleared the way for Turkey's air and ground invasion after he pulled American troops from their positions near the border, drawing swift bipartisan criticism that he was endangering regional stability and putting at risk the lives of Syrian Kurdish allies who brought down the Daesh group in Syria.

US Defense Secretary Mark Esper said Washington is "greatly disappointed" by the offensive, which has badly damaged already frayed relations with NATO-ally Turkey. In a strong statement of support for the Kurds, Esper insisted that "we are not abandoning our Kurdish partner forces, and US troops remain with them in other parts of Syria."

Sweden will push for a European Union weapons embargo against Turkey at an EU foreign ministers meeting on Monday, the Swedish parliament decided on Friday, state radio reported.

More than 70,000 people from Ras Al-Ayn and Tal abyad have been displaced so far amid escalating violence in Syria.

"I shared... my serious concerns about this ongoing operation and the risk of further destabilisation of the region," Stoltenberg told reporters in Istanbul, speaking alongside Turkish Foreign Minister Mevlut Cavusoglu.

"While Turkey has serious security concerns, we expect Turkey to act with restraint."

Turkey pounded Kurdish rebels in northeast Syria for a second day on Thursday, forcing tens of thousands of people to flee and killing dozens, in a cross-border assault on US allies that has turned the Washington establishment against President Donald Trump.

The Observatory said Turkish forces had seized two villages near Ras al-Ain and five near the town of Tel Abyad, while a spokesman for Syrian rebel forces said the towns were surrounded after fighters seized the villages around them.

France's Europe minister said Friday that EU sanctions against Turkey over its anti-Kurd offensive in Syria are "on the table", after European nations failed to convince the UN Security Council to condemn the military strikes by Ankara.

"Obviously it's on the table," Amelie de Montchalin told France Inter radio, saying potential reprisals over Turkey's incursion into northeast Syria would be debated during a European Council meeting next week.

The offensive against the Syrian Democratic Forces (SDF) led by Kurdish YPG militia, which began days after Trump pulled U.S. troops out of the way and following a phone call with Turkish President Tayyip Erdogan, opens one of the biggest new fronts in years in an eight-year-old civil war that has drawn in global powers. 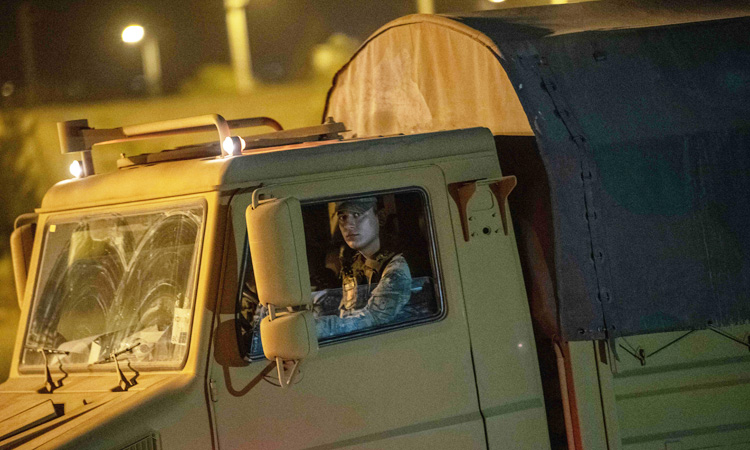 Turkish army soldiers drive towards the border with Syria near Akcakale in Sanliurfa province on Tuesday.

At least 23 fighters with the SDF and six fighters with a Turkish-backed Syrian rebel group had been killed, said the Syrian Observatory for Human Rights, which monitors the war.

The SDF said Turkish air strikes and shelling had also killed nine civilians. In an apparent retaliation by Kurdish-led forces, six people including a 9-month-old baby were killed by mortar and rocket fire into Turkish border towns, officials in southeastern Turkey said.

Turkey's Defence Ministry said 174 militants had been killed so far. Kurds said they were resisting the assault.

Turkey said on Friday that one of its soldiers was killed in northern Syria, the first such fatality in its offensive against a Kurdish militia.

Three more soldiers were injured in the “operation region,” the defence ministry said in a statement after clashes with the militia on Thursday. It gave no further details.

Fighting broke out in several locations along the roughly 120-kilometre (75-mile) wide front where operations are focused, the Syrian Observatory for Human Rights and a Kurdish military official said on Thursday.

Ankara has long opposed US support for the YPG in the fight against the Islamic State extremist group, arguing the militia is a “terrorist” offshoot of Kurdish insurgents inside Turkey.

The ministry’s statement comes after shelling from the militia into Turkey and Turkish military strikes in northern Syria, with casualties on both sides.

Seven civilians including a nine-month-old baby were killed in Turkish border towns in Sanliurfa and Mardin provinces. Nearly 70 were injured.

According to the UK-based Observatory, which relies on a network of sources in Syria, at least 29 fighters and 10 civilians have been killed in the war-ravaged country since the start of the assault.