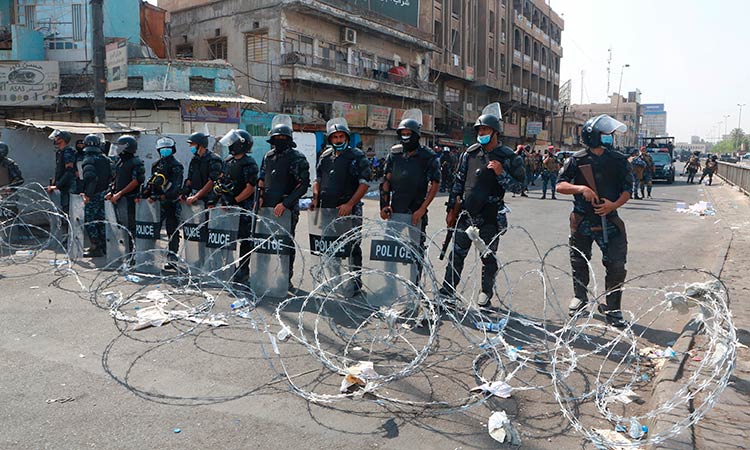 Iraq began three days of national mourning on Thursday for more than 100 people killed during recent protests, while the government was expected to present a reshuffle to parliament in response to the political crisis.

While social media sites in Iraq remained inaccessible — except intermittently via virtual private network (VPN) applications — more images emerged of the violence over the past week in which mainly protesters died from live fire.

Footage showed demonstrators — who initially demanded jobs and services before calling for "the fall of the regime" — being fatally shot, or running for cover under heavy fire. 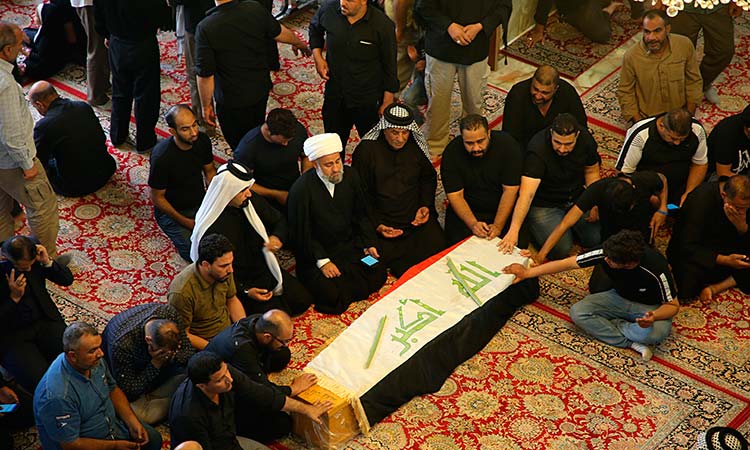 Mourners pray over the flag-draped coffin of a protester killed in Najaf, Iraq. File photo/AP

Authorities initially blamed "unidentified snipers" and infiltrating "saboteurs" but later acknowledged that the military had used "excessive force" in the Shiite bastion of Sadr City in Baghdad.

The judiciary also announced that a riot police officer had "confessed to killing a protester" in Hilla, south of Baghdad.

Prime Minister Adel Abdel Madhi responded to public anger in his second public address in less than a week, pledging to propose a cabinet reshuffle to parliament on Thursday.

The deeply divided assembly depends on the participation of its largest bloc: 54 lawmakers led by populist cleric Moqtada Al Sadr.

The bloc includes ministers but Sadr called for the resignation of the government nearly a week ago.

Since protests and violence calmed on Tuesday, the government has proposed reforms to lower youth unemployment, currently at 25 percent, while the labour ministry proposed an online job register.

Authorities initially blamed "unidentified snipers" and infiltrating "saboteurs" but later acknowledged that the military had used "excessive force" in the Shiite bastion of Sadr City in Baghdad.

One in five Iraqis live below the poverty line, in one of the world's most oil-rich countries.

Flags were flown at half-mast Thursday to mourn those who died during the week of violence.

Those killed — protesters and police — have been declared "martyrs" and their families will receive compensation.

With the return of normal life in Baghdad, traffic has again clogged the main roads of the sprawling city of nine million inhabitants. Schools, government offices and businesses have reopened.

At checkpoints into the city and on main roads however, vehicles were searched and additional troops were deployed.

Amnesty International called for authorities to properly investigate the "use of excessive and deadly force".

Security forces did not protect protesters from sniper fire, Amnesty said, "nor have police intervened and arrested anyone responsible for firing at demonstrations."

Washington called on Baghdad to exercise "maximum restraint" in dealing with protests, while London "raised concerns" about the violence and "the need to respect peaceful protest and media freedoms". 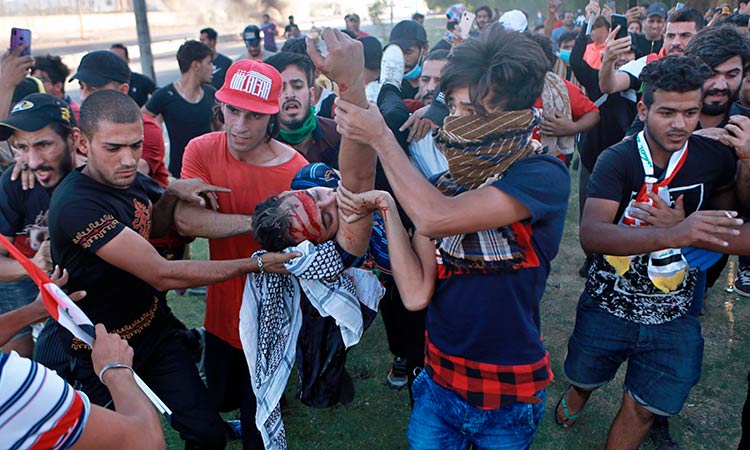 An injured protestor is rushed to the hospital in Baghdad, Iraq. File photo/AP

Amnesty also described "a sinister campaign of harassment, intimidation and arrests of peaceful activists, journalists and protesters by the authorities."

Several local television stations were ransacked, and their staff threatened and asked to stop broadcasting during night raids by armed men in uniform. Journalists and activists also received threats via telephone.

In a country where political rivals accuse each other of allegiance to foreign powers, President Barham Saleh has called for "sons of the same country" to end the discord.

So far this "national dialogue" has included meetings between MPs, tribal chiefs and political parties.

With calm returned to southern Iraq, Shiite Muslim pilgrims continue to converge. On October 20 they will commemorate Arbaeen, in which millions of Shiite Muslims walk to the holy city of Karbala, south of Baghdad.