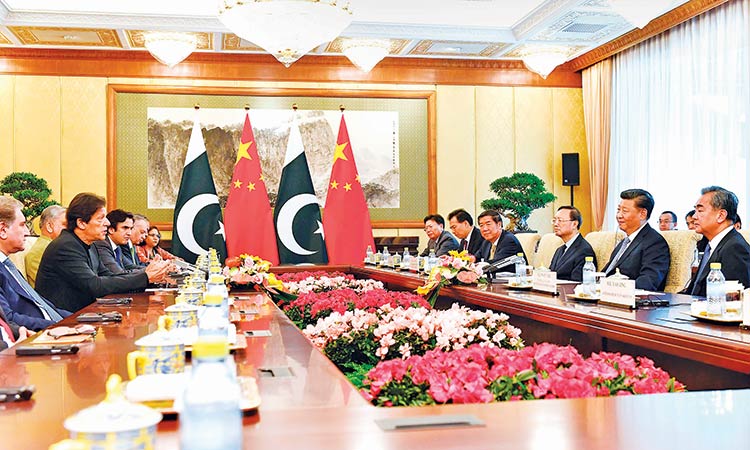 Chinese President Xi Jinping said on Wednesday he was watching the situation in Kashmir and would support Pakistan in issues related to its core interests, the official Xinhua News Agency reported.

Tensions over the disputed region of Kashmir have risen sharply since August, when India revoked the autonomy of its portion of the territory.

Xi told Pakistani Prime Minister Imran Khan during a meeting in Beijing that the rights and wrongs of the situation were clear, the report said.

“China supports Pakistan to safeguard its own legitimate rights and hopes that the relevant parties can solve their disputes through peaceful dialogue,” Xi said, according to Xinhua.

During the meeting at the Diaoyutai State Guesthouse, Xi said China and Pakistan have a fine tradition of mutual support and assistance.

Noting that Pakistan used to provide selfless help to China during difficult times, Xi said now that China has developed, it sincerely hopes to help Pakistan develop faster and better.

The Indian government’s official spokesperson, Raveesh Kumar, said that his government had seen reports of the meeting, in response to a question from media about the issue.

“India’s position has been consistent and clear that Jammu and Kashmir is an integral part of India. China is well aware of our position. It is not for other countries to comment on the internal affairs of India,” he said.

The Chinese and Pakistani leaders also highlighted discussion around how to speed up progress on the China Pakistan Economic Corridor (CPEC), the $60 billion infrastructure programme China launched as part of its flagship “Belt and Road” project.

Some officials and observers have said momentum on CPEC is slowing, in part due to concerns over the size of Pakistan’s debt and struggling economy, which led Islamabad to turn to the International Monetary Fund for a $6 billion bailout package in July. “The two sides expressed determination to speedily execute CPEC so that its growth potential can be fully realised making it a high-quality demonstration project for BRI,” the governments said in a joint statement.

Imran said that his government was setting up a “CPEC Authority” to expedite projects, and making arrangements to help Gwadar Port, a deep sea port in Pakistan’s southern Balochistan province, become a regional trade hub.

Imran did not provide details on the plans, but earlier in the day Pakistan’s media reported that the maritime minister had announced China Overseas Ports Holding Company, which operates the port, would get a 23-year tax exemption for installation of machinery and other equipment at the port.

Pakistan has decided to give tax exemption of 23 years to a Chinese firm working at Gwadar Port.

This was announced by Pakistan Federal Minister for Maritime Affairs Ali Haider Zaidi. He said that the government has granted tax exemption to the China Overseas Ports Holding Company (COPHC) for 23 years to facilitate establishment of its industrial units at Gwadar Port, reported Dawn news.

COPHC CEO Zhang Baozhong said the present government had resolved the tax exemption issue that had been pending for the past seven years. He expressed the hope that due to the business-friendly policies of the government, more foreign investment would come to the country.

Zaidi said that the project had already been operating at Gwadar Port and now would get tax exemption for installation of machinery and other equipment at the port. The initiative was a step towards relocation of the Chinese manufacturing industry in Gwadar and engaging the local labour, he said, adding that the move would ultimately boost Pakistan’s economy.

The minister said the COPHC would also set up a desalination plant, Pak-China Technical and Vocational Training Institute and Pak-China Friendship Hospital in Gwadar.