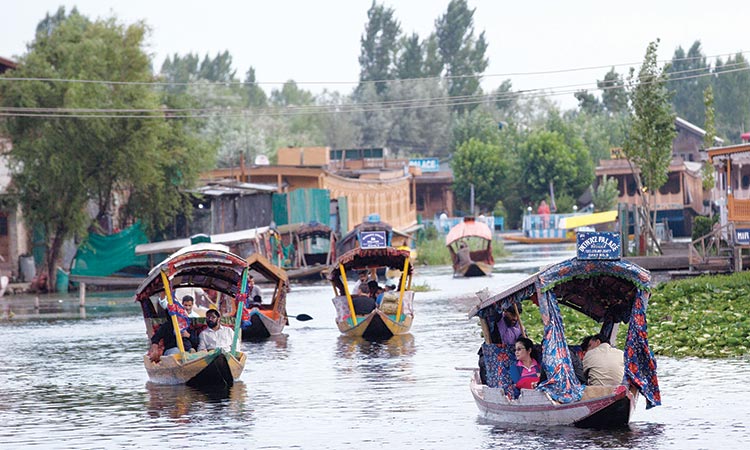 Tourists in Shikaras cross the Dal Lake as they prepare to leave Srinagar. Associated Press

India’s main opposition Congress said on Wednesday it would boycott local elections in Kashmir, joining two other parties in a setback for government efforts to restart political activity after it revoked the state’s special status two months ago.

Prime Minister Narendra Modi has faced international condemnation for his handling of the situation in Kashmir, particularly over communication restrictions and the detention of hundreds of people including politicians that accompanied the withdrawal of its autonomy in August.

The government says normalcy is slowly returning to the Muslim-majority territory and was hoping that the elections to sub-district councils set for Oct. 24 would help bolster its case that ordinary Kashmiris wanted faster economic development.

But the Congress party state chief Ghulam Ahmad Mir said with scores of members detained, an election was pointless.

“We have decided to stay away from the polls which should have been deferred taking into consideration the prevailing situation in the state as was demanded by all the opposition political parties”, Mir, who himself was under house arrest till last week, told reporters in Kashmir’s main city of Srinagar.

Authorities detained hundreds of separatists fighting for Kashmir’s secession from India as well as local politicians for fear of large scale protests over the decision to withdraw Kashmir’s decades-old special rights and divide the state into two federal territories.

Many have since been released. Two other regional parties - National Conference and the Peoples Democratic Party - whose leaders are still detained, will also stay out of the polls.

“They (the government) want to give the impression that there is normal political activity but there is nothing normal about the situation,” a source with knowledge of the Peoples Democratic Party leadership’s thinking told Reuters.

“As of now there is no question of any democratic process and given the atmosphere that is around, the BDC elections seem irrelevant,” he told reporters in Srinagar, referring to what locally are known as block development councils.

Both parties also boycotted the village-level polls in the Kashmir Valley last year, leading to the election of heads for only around 60% of village councils, according to official data.

Authorities in Indian-controlled Kashmir will allow tourists back into the region two months after ordering them to leave because of security concerns amid an Indian crackdown, an official said Tuesday.

But tourists are unlikely to experience normal life in the disputed area or be able to use mobile internet or cellphones, which remain cut.

Local government spokesman Rohit Kansal said the decision was made after a review of the situation. Security restrictions “have now been withdrawn almost entirely from all parts of Jammu and Kashmir,” he said.

He said the restrictions on the entry of tourists will be lifted on Thursday.

The government instructed tourists and Hindu pilgrims to leave on Aug. 2, three days before India stripped the Muslim-majority region of its statehood and decades-old semi-autonomy.

Prime Minister Narendra Modi’s Hindu nationalist-led government also sent tens of thousands of additional troops to the region, already one of the most militarized in the world. It imposed a harsh security clampdown, cutting virtually all communications.

Indian troops arrested thousands of anti-India as well as pro-India activists, including some Kashmiri leaders who have historically accepted Indian rule over the region, in the days leading up to and after the revoking of its special status.

The moves touched off widespread anger, as one of the revisions allows anyone to buy land in the territory, which some Kashmiris fear will result in an influx of Hindus who would change the region’s culture and demographics.

Authorities have since eased some restrictions and encouraged students to return to school and businesses to reopen, but Kashmiris have largely stayed indoors to show their defiance of Indian rule.