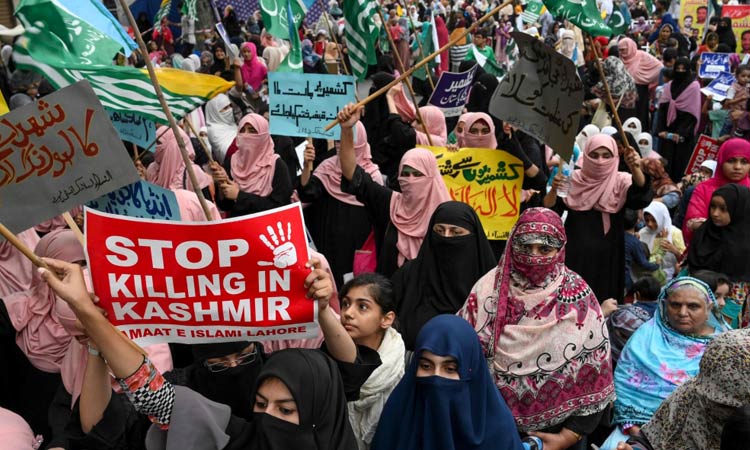 Supporters and activists of Jamaat-e-Islami Pakistan hold placards as they walk during a Kashmir Azadi ('Freedom for Kashmir') march in Lahore on Sunday. AFP

Sniper fire from India killed a woman outside her home in the border village of Abbaspur, in Azad Jammu and Kashmir (AJK), a senior Pakistani police official said on Monday.

According to police chief Zulqarnain Chaudhry, the 45-year-old woman was killed on Sunday. The fire came from the Indian sector, across the boundary in the disputed Himalayan region, he said.

Although Pakistan and India often exchange fire in Kashmir, Sunday's incident took place as US Senators Chris Van Hollen and Maggie Hassan, along with Ambassador Paul Jones, charge d' affairs at the US embassy in Islamabad, were visiting Muzaffarabad, the capital of Pakistan-controlled Kashmir.

Tensions in Kashmir, which is divided between Pakistan and India but claimed by both in its entirety, have escalated since August, when India downgraded the autonomy of Indian-administered Kashmir and imposed a lockdown. The development drew condemnation from Pakistan, where people often rally against Indian Prime Minister Narendra Modi over changing the status of Kashmir.

"Why did you stop the American senator from visiting Indian-occupied Kashmir, if life is normal there and if you have nothing to hide," Qureshi asked, his question directed at Modi. He added that the day is not far away when Kashmir will get independence from Indian rule.

Pakistan never stopped anyone from visiting its part of Kashmir, he added, since "we have nothing to hide, like India."