NC pitches for release of Abdullahs ahead of polls - GulfToday

NC pitches for release of Abdullahs ahead of polls 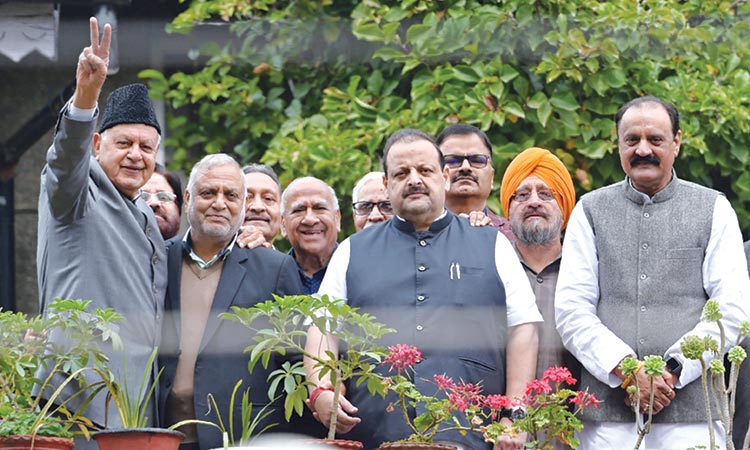 Farooq Abdullah along with party colleagues gestures at his residence in Srinagar on Sunday. Agence France-Presse

First the meeting was with Omar Abdullah followed by another meeting of the delegation with Farooq Abdullah. It was the first such meeting between Omar and any party delegation ever since he has been put under detention since Aug.5 when India abrogated Article 370.

Emerging from the meeting, Rana told the media, there is “anguish about developments particularly about lockdown of the people and we, as a party, appeal that the political process to start and democracy to revive in Jammu and Kashmir political detenues anywhere and everywhere, whether from mainstream political parties or otherwise who have no criminal record, may be released to initiate the process and the hearts and minds of the people of Jammu and Kashmir are won.”

The permission for this meeting was granted by the Jammu and Kashmir administration, days after it was sought from Governor Satya Pal Malik. Former NC legislators were also part of the delegation.

The delegation had officially maintained before the meeting that the point of discussion would be restricted to the prevailing situation in Kashmir, following the abrogation of Article 370 of the constitution, that gave special right to Kashmir, on August 5; but it was widely speculated, that the upcoming block development council (BDC) poll could also have figured during the meeting.

When asked specifically about BDC, Rana said: “There is a complete lockdown. If the political process has to start then these members have to be released.”

Both the leaders are under restrictions ever since India axed Article 370. Farooq Abdullah has been placed under arrest under the draconian Public Safety Act (PSA).

“Let them be released, then the working committee of the party will meet and discuss and then we will formulate a strategy for the future,” said Rana.

Two months after the abolition of special status of Jammu and Kashmir granted under Article 370, an uneasy calm prevails in the Valley, even though there have been some sporadic incidents of stone-pelting incidents and protest marches.

But, the actual situation will unfold once the restrictions are removed completely and leaders of the various regional parties are released from detention in Kashmir.

The question is what will they do after being released? Will they choose to go on a war path with the government and if they do, then how far will their cry go? Abrogation of special status has led to a sort of existential crisis for the Valley leaders because their politics has been driven by the fissiparous philosophy of Article 370.

The revocation of special status will impact the political narrative in the Valley. No longer can the politics of flipping coin work. In the post-370 scenario, it is either pro or anti stance, and the space for autonomous entity has ended.

The mainstream politicians cannot toe the separatist line and the separatists are feeling psychologically defeated after the failure of the Muslim world to rise in support of them.

On June 26, 2000, NC-led state government got an 1/2autonomy’ resolution passed in the Assembly. The resolution, which talked about setting the clock back to pre-1953 position before his father Sheikh Abdullah was arrested, was, however, rejected by the then central government headed by Atal Behari Vajpayee.

While Farooq Abdullah has been slapped with the stringent Public Safety Act (PSA), his party MP Akbar Lone has given a peek into the future course of action by the NC. He said his party will contest elections even as it wants NC, PDP and all other regional parties to come together to agitate for restoration of Article 370.

By talking about elections, NC has shown faith in the Constitution, but there is a big question mark on the unity efforts.

During their detention at Hari Niwas Palace in Srinagar they are said to have quarreled so badly that the administration was forced to shift one of them from the palace.