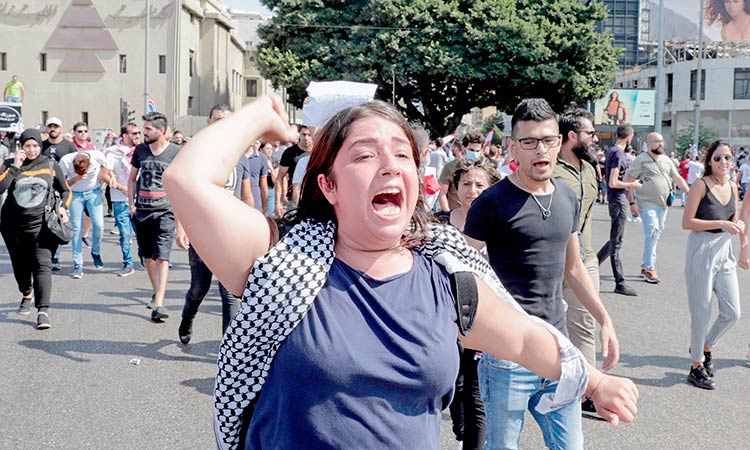 A protester shouts slogans during a demonstration near central Beirut’s Martyr Square on Sunday.

Fears of a monetary devaluation in Lebanon, where the exchange rate has been fixed for more than two decades, are on the increase following a dollar shortage and the downgrading of the country’s sovereign credit rating.

Panic has gripped Lebanon in recent weeks when it became nearly impossible to withdraw dollars from ATMs or to change large sums in banks.

Since 1997, when the exchange rate was fixed at 1,500 Lebanese pounds to the dollar, the greenback has been used interchangeably with Lebanese pounds in everyday transactions.

That measure was adopted after several rounds of devaluations in the 1980s and after Lebanon 1975-1990 civil war.

But on the parallel market, exchange rates reached 1,600 Lebanese pounds to the dollar in September.

This depreciation and banking restrictions prompted calls for strikes, notably from gas station owners who receive pounds but would have to pay suppliers in dollars. The action was called off under a deal allowing payments in dollars.

After initially denying a dollar shortage, the central bank blamed the fluctuating exchange rate on increased imports, which observers say could be partly due to smuggling to neighbouring war-torn Syria.

But Lebanese economist Jad Chaaban points to a decision by banking authorities to control the flow of capital, including central bank “oversight to limit anyone exchanging dollars in banks, but also withdrawing large dollar amounts.”

The original rationale for banking restrictions was worry over revised ratings to Lebanon by the three major international credit agencies.

Standard & Poor’s (S&P) kept Lebanon’s “B-/B” rating but with a negative outlook, meaning it could slide over the next year, the agency’s associate director of sovereign ratings Zahabia Gupta told reporters.

The Lebanese economy has suffered for years from low growth and a public debt swelling to around $86 billion. At roughly 150 percent of gross domestic product, this is one of the highest rates worldwide.