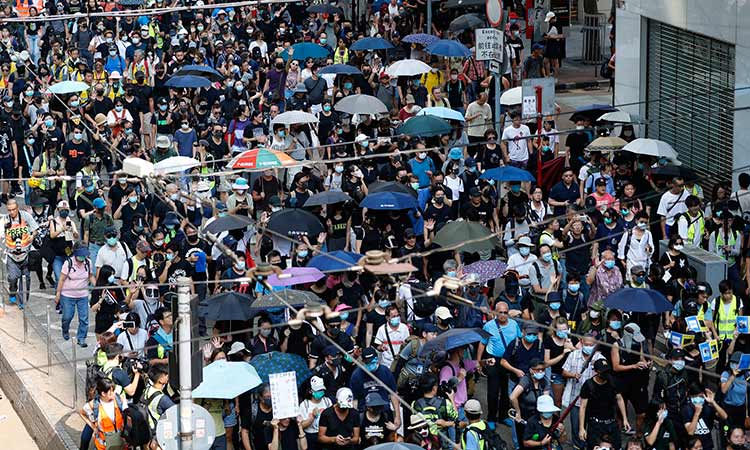 Hong Kong’s metro system stayed shut on Saturday, paralysing transport in the Asian financial hub after a night of chaos in which police shot a teenage boy and pro-democracy protesters torched businesses and metro stations.

Friday's protests across the Chinese-ruled city erupted hours after its embattled leader, Carrie Lam, invoked colonial-era emergency powers for the first time in more than 50 years to ban the face masks demonstrators use to hide their identities. 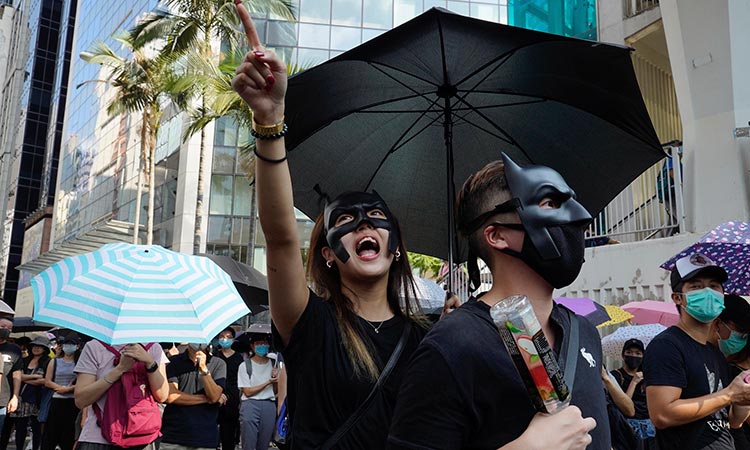 "The extreme violence clearly illustrated that Hong Kong's public safety is widely endangered. That's the concrete reason that we had to invoke emergency law yesterday to introduce the anti-mask law." 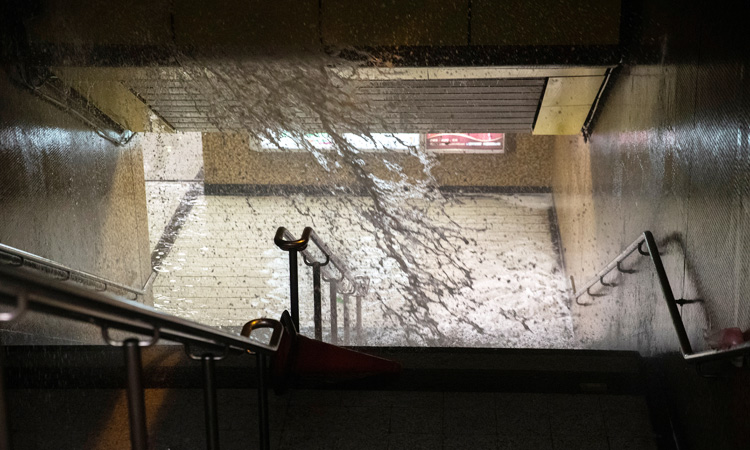 But undeterred by the ban and transport shutdown, several hundred protesters, many wearing masks, took to the streets on Saturday, marching through the bustling central district of Causeway Bay, with more protests planned through the weekend.

"We’re not sure what is going to happen later, but we felt we had to get out and show our basic right to wear a mask," said one protester, Sue, 22, who wore a black mask and dark glasses.

"The government needs to learn it can’t squeeze Hong Kong people like this."

The increasingly violent demonstrations that have roiled the city for four months began in opposition to a bill introduced in April that would have allowed extradition to mainland China, but they have since spiraled into a broader pro-democracy movement. 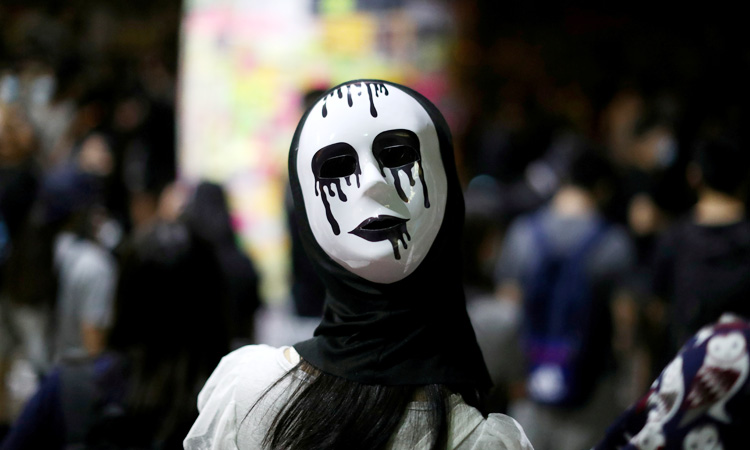 An anti-government protester wears a mask during a demonstration in Wong Tai Sin district, Hong Kong.

MTR Corp said its network, which carries about 5 million passengers each day, would remain suspended, while shopping malls and supermarkets also closed, in a new blow for retailers and restaurants in a city on the edge of recession.

"As we are no longer in a position to provide safe and reliable service to passengers in the circumstances, the corporation had no choice but to make the decision to suspend the service of its entire network," it said in a statement.

Protesters had set fires at stations, as well as to an empty train, and injured two staff, added MTR, which is known for operating one of the world's most efficient rail networks.

All stations closed late on Friday, stranding passengers and forcing many to walk home, a situation set to worsen during a holiday weekend in the city.

The airport express, one of the most popular routes to the airport, re-opened with restricted service on Saturday, MTR said. 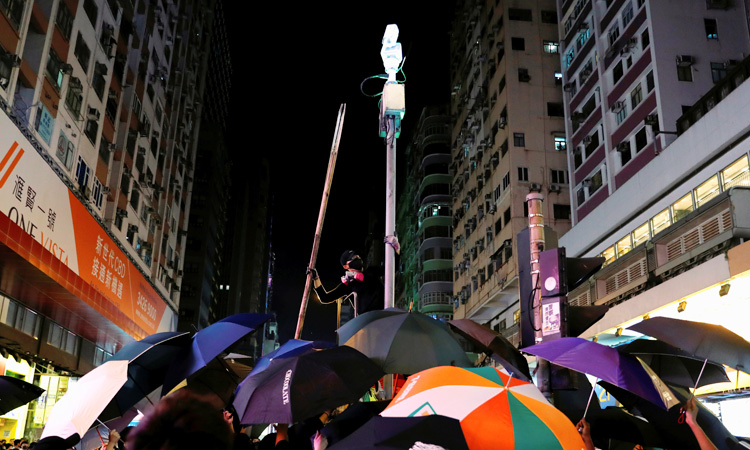 An anti-govt protester tries to climb up the lamppost to break the CCTV camera during a demonstration at Mong Kok in Hong Kong.

More than a dozen shopping malls, supermarkets, and branches of Bank of China (Hong Kong), Bank of East Asia , and Industrial and Commercial Bank of China , which have been targeted by protesters, said they would not open on Saturday.

The 7-Eleven chain of convenience stores said outlets would close at 5pm.

The ban on face masks, which took effect on Saturday, was ordered under emergency laws allowing authorities to "make any regulations whatsoever" in what they deem to be the public interest.

But the move enraged protesters, who took to the streets to vent their anger, many wearing masks in defiance of the ban.

There were no immediate reports of arrests over the masks.

Demonstrators set fires, hurled petrol bombs at police and burned the Chinese national flag, in a direct challenge to authorities in Beijing. 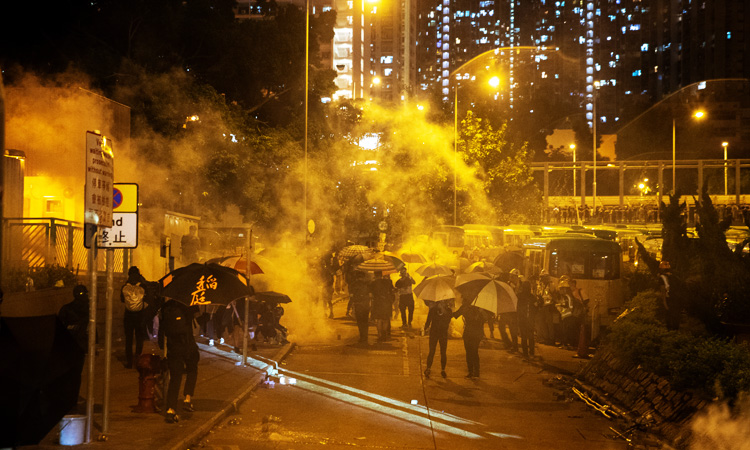 Police said an officer in Yuen Long, a district in the outlying New Territories that saw fierce clashes in July, had fired a shot in self-defence after a protester threw a petrol bomb at him, setting him ablaze.

Media said a 14-year-old boy was shot and the city’s Hospital Authority said his condition was now stable, but gave no details.

About 100 demonstrators besieged a branch of the Bank of China (Hong Kong) in the high-end shopping district of Causeway Bay, while across the harbour in the district of Kowloon, protesters smashed the glass store front of a China Life branch. 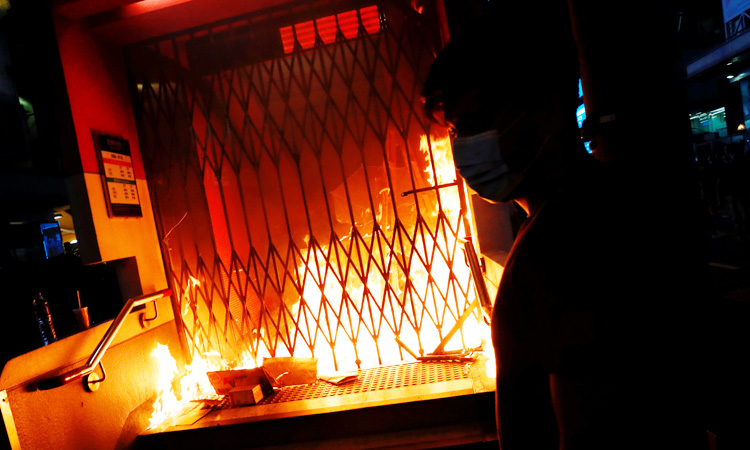 An anti-govt protester wears a mask as he sets a fire outside Mong Kok Mass Transit Railway (MTR) station at Mong Kok.

Police fired volleys of tear gas to disperse protesters in flashpoint districts such as Causeway Bay, Sha Tin and Wong Tai Sin, underscoring the challenges they face as protests show no sign of letting up.

Hospital authorities said 31 people were hurt in Friday's protests, two of them seriously.