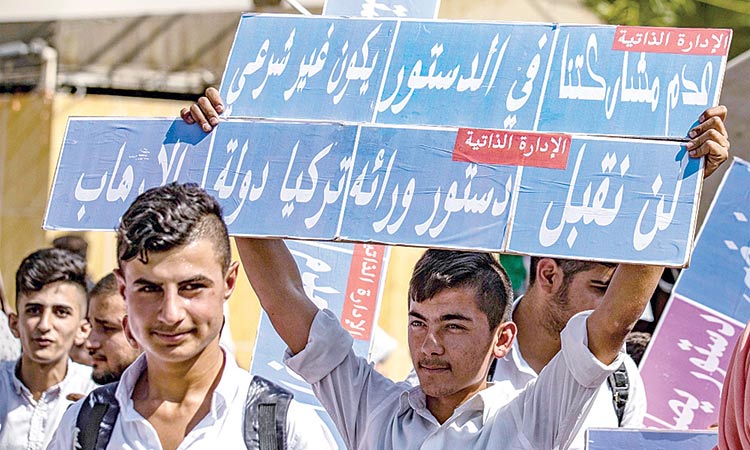 Syrian Kurds demonstrate in front of the UN headquarters in northeast Syria on Wednesday. Agence France-Presse

Turkey does not think its effort with the United States to form a “safe zone” in northeast Syria will yield the results it wants and is ready to carry out a military operation, Foreign Minister Mevlut Cavusoglu was quoted as saying on Thursday.

Ankara and Nato ally Washington have agreed to establish a zone on the Syrian border that Turkey wants to be 30 km deep and cleared of the Syrian Kurdish YPG militia, which it sees as a terrorist organisation.

Turkey says up to 2 million Syrian refugees can settle in the zone, but it has repeatedly warned of unilateral military action if efforts do not meet its expectations or are stalled.

President Tayyip Erdogan said on Tuesday that Turkey had no choice but to act alone given the lack of progress made with the United States, in his most direct indication yet of a military incursion.

Speaking to broadcaster A Haber on Thursday, Cavusoglu said Turkey had not seen sincerity from the United States. “We think this ongoing process with the United States will not take us to the point we desire. The information coming from the field proves this,” he was quoted as saying by A Haber. Ties between the Nato allies have been strained over a host of issues, including Syria policy and the looming threat of US sanctions over Ankara’s decision to buy Russian defence systems.

While diplomats, analysts and Turkey’s main opposition say Ankara would be unwilling to anger Washington with a full-scale military incursion as the allies try to repair strained ties, Turkey has been pressing for efforts to be stepped up.

US and Turkish troops have so far carried out half a dozen joint air missions over the zone in northeast Syria and two land patrols, but Washington has warned Turkey that unilateral action would not serve any country’s security or benefit.

Cavusoglu reiterated Ankara’s warning that it was ready for an offensive. “We must take steps to clear the terrorist organisations from our vicinity and return refugees there,” he said.

Looking out over a park planted at Russia’s naval facility in the Syrian port of Tartus, the base commander points to a row of trees.

“These plants will have time to grow,” the Russian says, his eyes shielded from the Mediterranean sun by a desert camouflage cap.

Four years after they intervened in Syria in support of President Bashar Al Assad, Russian military forces are showing no signs of leaving the country. Just the opposite in fact.

On a recent Russian defence ministry tour of Syria, journalists said and other media saw Moscow’s forces digging in for a long stay − cementing a presence that will have implications across the Middle East.

At the base in Tartus, a sprawling complex on the coast of the eastern Mediterranean, Russian warships and submarines were on full display.

“Every necessary comfort” is provided to the Russian soldiers, an officer says.

Moscow launched its campaign in support of Assad at the end of September 2015, at the height of a civil war that saw extremists and other rebels take control of large parts of the country.

Russia’s intervention marked a turnaround and pro-regime forces have since retaken much of the territory once outside government hands.

Officially, some 63,000 Russian servicemen have passed through Syria during the campaign, including soldiers, sailors and pilots who at the peak of a bombing campaign were carrying out more than 100 sorties per day.

Hundreds of private Russian military contractors are also believed to have operated in Syria, with reports of them serving on the front line alongside pro-regime troops.

The conflict has been a crucial training ground for Russian forces abroad and testing opportunity for arms like Moscow’s Kalibr missiles and modernised Tu-22M long-range bombers.

Some 3,000 Russian service personnel are now deployed in Syria, at facilities like Tartus and the Hmeimim airbase near Assad’s home town of Latakia.

Moscow has signed 49-year leases on the two facilities, giving Russia its first long-term military presence in the Middle East.