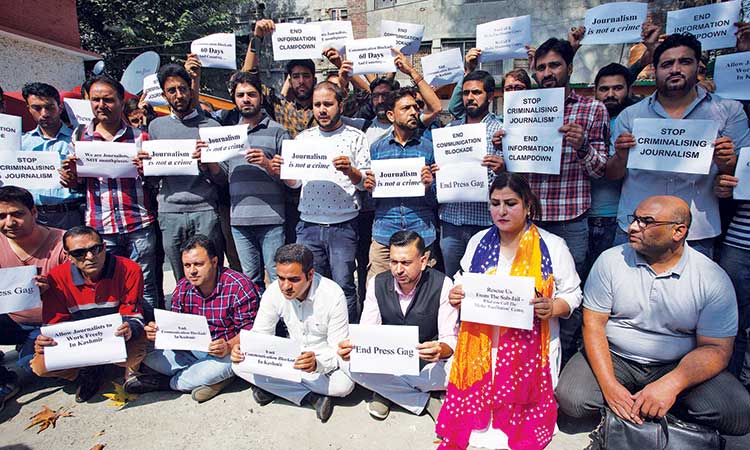 Journalists hold placards as they attend a silent protest in Srinagar on Thursday. Reuters

Journalists in Indian Kashmir on Thursday staged a small silent protest against what they say has been a “media gag” by Indian authorities that has badly affected their ability to work in the disputed region for the last 60 days.

India stripped its portion of Muslim-majority Kashmir of autonomy on Aug.5, shutting off phone networks and imposing curfew-like restrictions in some areas to dampen discontent.

Some of those curbs have been slowly relaxed, but mobile and internet communications in the Kashmir valley are largely still blocked, severely impacting the ability of journalists to report from the region.

Carrying placards and wearing black badges, more than 100 Kashmiri journalists gathered inside the Kashmir Press Club premises in Srinagar to stage a protest, as street protests are still restricted.

“End information clampdown”, “Stop criminalising journalists”, “Journalism is not a crime”, read placards held up during the silent protest.

The Indian government has provided an internet connection at a media centre set up for journalists, but reporters say this is insufficient and it lacks privacy. “There’s no privacy. Some 300 journalists use that facility daily and it is crowded. It is also being monitored and we are under surveillance,” said Ishfaq Tantray, general secretary of the Kashmir Press Club.

A government spokesman in Kashmir was not immediately reachable for comment.

The president of the Kashmir Press Club, Shuja Thakur said that they had several times approached the Indian government in Kashmir for restoration of mobile and internet services for journalists.

“They keep promising and say they are looking into it, but so far there has been no action,” he said.

New Delhi said the scrapping of Jammu and Kashmir state’s special status was necessary to integrate it fully into the rest of India and spur development.

Kashmir is divided between India and Pakistan, who both claim the territory in full. More than 40,000 people have been killed in an insurgency in the Indian part of Kashmir since 1989.

Separately on Thursday, local media reported that opposition leaders in Jammu — where restrictions have already been eased to a greater extent — were after almost two months allowed to move out of their homes on Wednesday and resume their political activities.

The lifting of restrictions on movement of around a dozen top opposition leaders in Jammu comes ahead of local council elections in the state that are scheduled for Oct.24, the Indian Express reported.

Students preferred to stay away from schools even as the Jammu and Kashmir administration announced the opening of all the higher secondary schools across the Kashmir Valley after a gap of two months since the abrogation of Article 370 on August 5.

On Thursday Divisional commissioner Kashmir Baseer Ahmad Khan directed all the Deputy Commissioners of Kashmir and officials of the Education Department to open the higher secondary schools.

Only staff members were present but there were no students in any of these schools.

SP Higher Secondary school in Srinagar has been converted into a CRPF camp with several companies of the Central Reserve Police Force deployed there.

“There are 24 classrooms in the school, which have all been taken over by the CRPF,” a teacher at the school told IANS.

Staff members were present but not the students in Higher Secondary School Jawahar Nagar with a strenth of over 1,100 students and Girls Higher Secondary school Rajbagh with over 300 students When the state administration opened other schools last month the outcome was similar. The move drew an extremely poor response. Only the staff members showed up in the schools as most students stayed away. Flagging off the second semi-high speed indigenous Vande Bharat train from the national capital to Katra in Jammu and Kashmir, Union Home Minister Amit Shah on Thursday announced that Kashmir would be in the “list of most developed Indian states in the next decade and a beginning in that direction has already been made today by the Railways”.