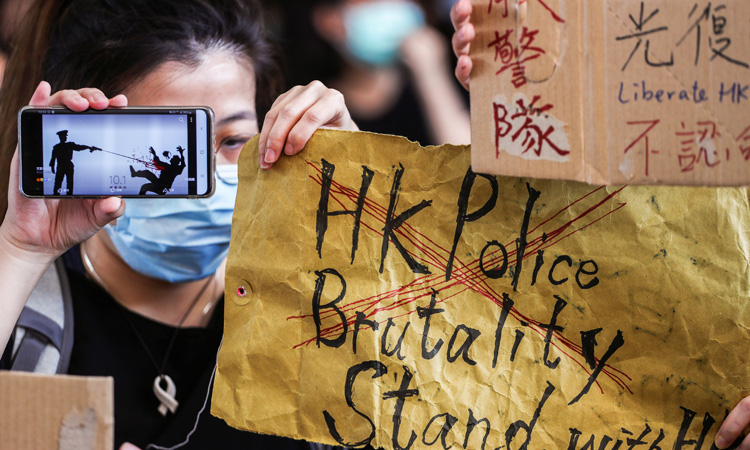 People hold up signs and a mobile phone as they gather at West Kowloon Law Courts Building to show their support to anti-govt protesters who were arrested days ago in Hong Kong on Wednesday. Athit Perawongmetha/ Reuters

Hong Kong authorities mopped up on Wednesday after the most violent clashes in nearly four months of anti-government unrest, including the shooting of a teenage demonstrator by police and the arrest of more than 180 people.

More than 100 people were injured during Tuesday’s turmoil, Hong Kong’s Hospital Authority said, as angry demonstrators took to the streets across the territory and police fired tear gas and water cannon to try to disperse them.

Among the injured was an 18-year-old school student who was shot in the chest with a live round. He is in stable condition in hospital. 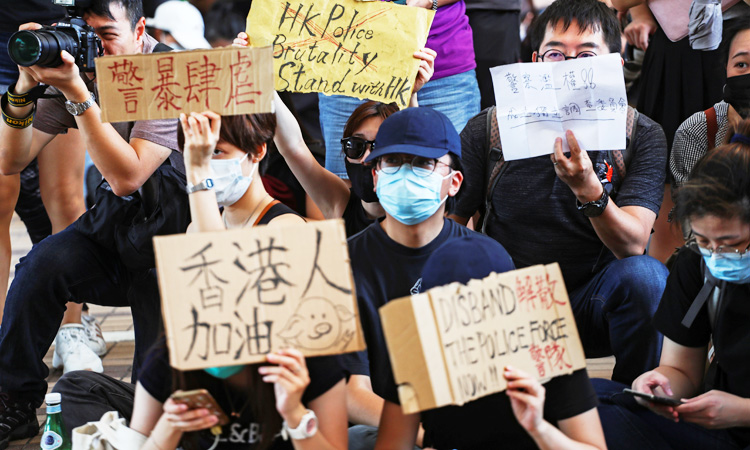 Tuesday’s protests, on the 70th anniversary of the founding of the People’s Republic of China, were aimed at propelling the activists’ fight for greater democracy onto the international stage and embarrassing the city’s political leaders in Beijing.

The former British colony has been rocked by months of protests over a now-withdrawn extradition bill that would have allowed people to be sent to mainland China for trial but have evolved into calls for greater democracy, among other demands.

The outpouring of opposition to the former British colony’s Beijing-backed government has plunged the city into its biggest political crisis in decades and poses the gravest popular challenge to President Xi Jinping since he came to power. 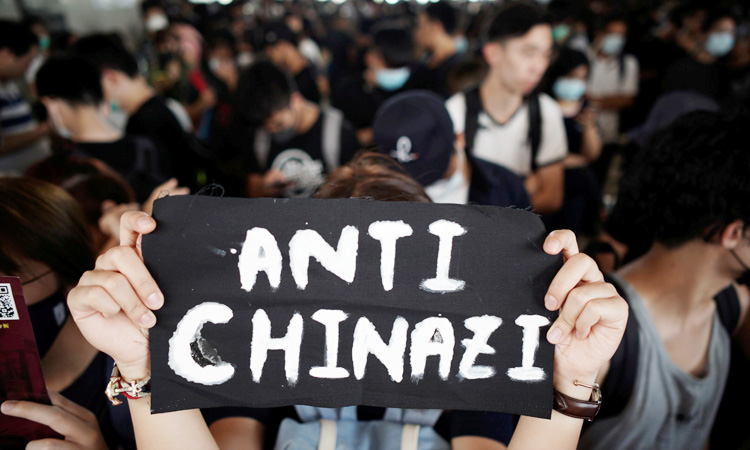 Woman holds up a message as she gathers at West Kowloon Law Courts Building to show support to anti-government protesters who were arrested in Hong Kong.

The protests on Tuesday quickly degenerated into chaos as police fired tear gas and water cannon at petrol bomb-throwing protesters in areas spreading from the shopping district of Causeway Bay to the Admiralty area of government offices, over the harbour to Kowloon and beyond to the New Territories.

The pro-establishment Democratic Alliance for the Betterment and Progress of Hong Kong condemned the violence and urged the government to impose emergency laws to stop the unrest.

Ninety-six people appeared in court on Tuesday, charged with rioting during violent clashes on Sunday. 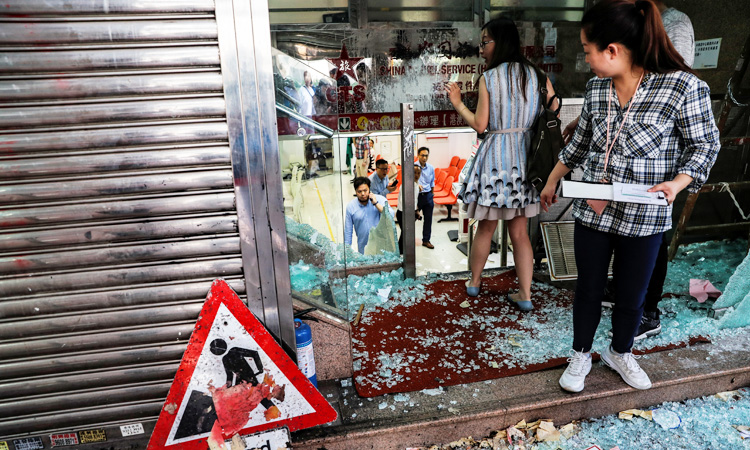 Employees of China Travel Service, a tourism and travel agency of the China government, are seen at their vandalized office in Tsuen Wan, Hong Kong on Wednesday

More protests are planned, including class boycotts at some secondary schools on Wednesday in response to the point-blank shooting of the 18-year-old.

Protesters have previously been hit with bean bags rounds and rubber bullets and officers have fired live rounds in the air, but this was the first time a demonstrator had been shot with a live round.

Police said the officer involved was under serious threat and acted in accordance with official guidelines. The wounded man was conscious when taken to hospital, police added, but an update on his condition was not immediately available on Wednesday. 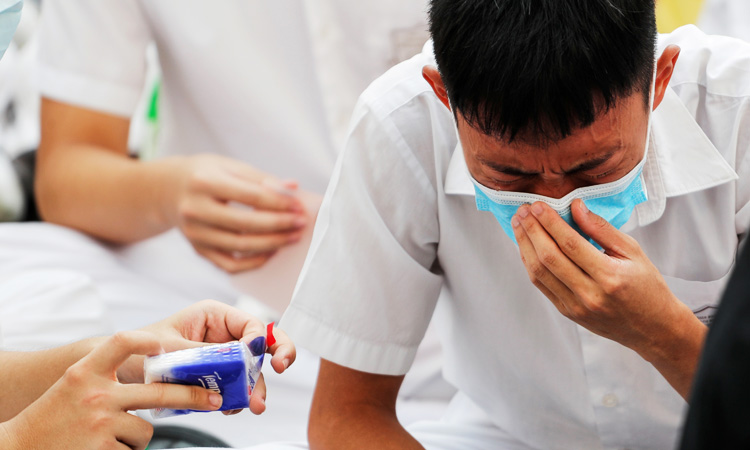 A schoolmate of a student protester who was shot by a policeman on Tuesday cries while participating in a student gathering.

MTR Corp shut nearly 50 stations on Tuesday to stop protesters moving around on Tuesday, making the rail operator once again a target of vandalism. Demonstrators have stepped up attacks on publicly traded MTR, which has been blamed for closing stations at the government’s behest. 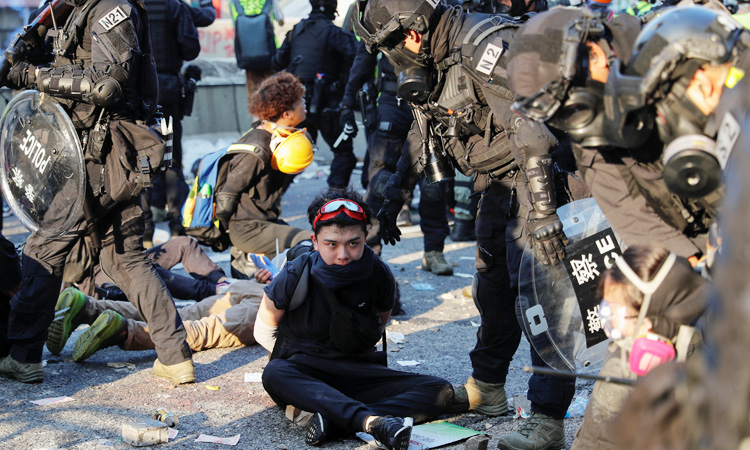 By early on Wednesday, all metro stations were open although some lines were running slower than normal as MTR workers tried to repair damage to prepare the service for the nearly 6 million people who use it every day.

Many shops and business closed on Tuesday in anticipation of violence, which are taking a growing toll on the city’s economy as it faces its first recession in a decade and the central government grapples with a U.S.-China trade war and a global slowdown. 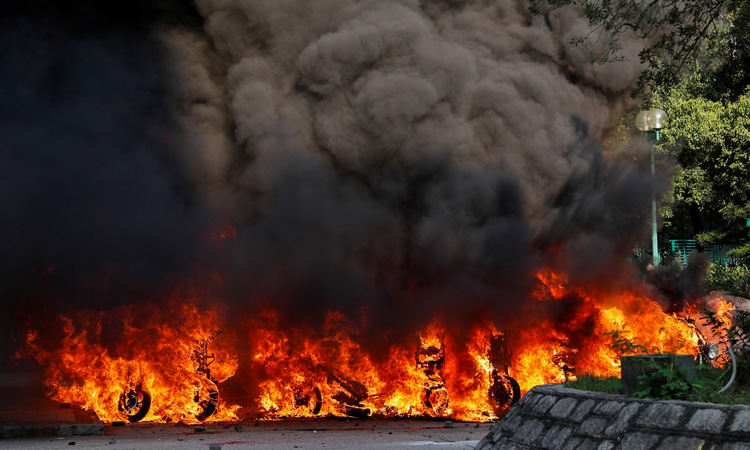 Motorbikes are on fire after they were hit with a molotov cocktail during a protest on China's National Day, in Wong Tai Sin.

Standard & Poor’s cut its Hong Kong economic growth forecast on Tuesday to 0.2 per cent for this year, down from its forecast of 2.2 per cent in July, blaming tension in the city for plunging retail sales and a sharp dip in tourism.

Protesters are angry about what they see as creeping interference by Beijing in their city’s affairs despite a promise of autonomy. 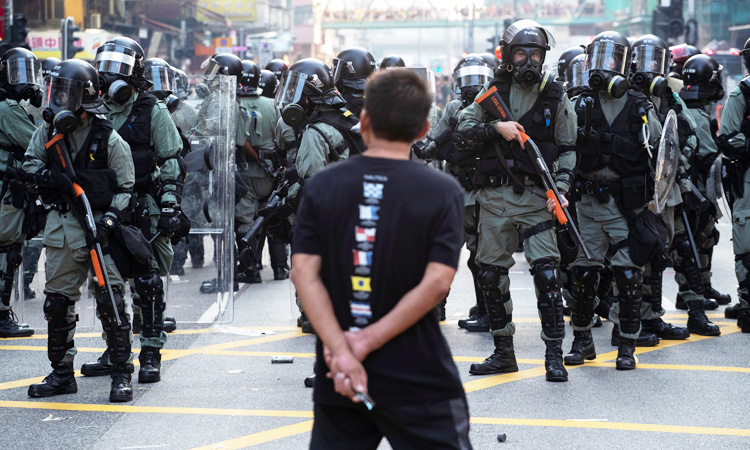 A man stands in front of riot police officers during a protest in Sham Shui Po district, on China's National Day in Hong Kong.

China dismisses those claims and has accused foreign governments, including the United States and Britain, of fanning anti-China sentiment.

The protesters are increasingly focusing their anger on mainland Chinese businesses and those with pro-Beijing links, daubing graffiti on store fronts and vandalising outlets in the heart of the financial centre.